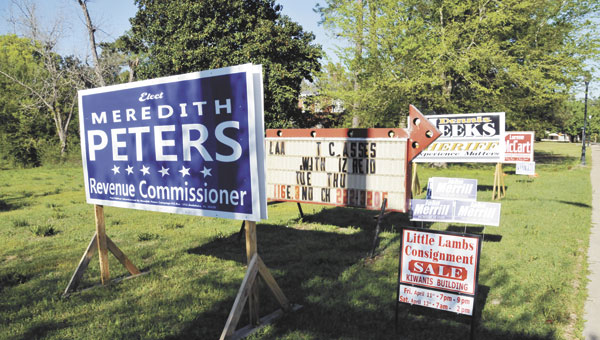 Election season is in full swing, but soon, summer will be as well, and officials with the Alabama Department of Transportation say election signs are causing problems for clean-up crews.

DOT District Manager Bill Wofford said the signs are almost always a headache for mowing crews working to clean state right-of-ways. He said it is important for candidates to know the signs are illegal and will be removed by state workers.

“These signs are all over the place, including state highway right-of-ways,” Wofford said. “Once again, it is time to start up our mowers, possibly as early as next week. Our mower crew personnel hate dealing with the issue of political signs within the mowing limits, because they have been harassed and even threatened for removing these illegal signs so that we can accomplish our job.”

Wofford said the problem has occurred with such frequency that, this year, he would like to issue a warning to political candidates and their campaign teams: Keep the signage out of illegal areas, or they will be taken and destroyed.

“We have made great efforts to inform the political parties, and even the individual candidates, about signs on the right-of-ways, but some are still out there,” Wofford said. “Candidates, this is your last notice: If campaign signs, or any other illegal signs, are in the mowing limits, they will be removed and destroyed. You will not be able to get them back.”

Wofford also said the warning is a one-strike-and-you’re-out deal.

“Please do not call our office and tell us to look at all your signs for you,” he said of political teams. “We

don’t have the resources to check all signs. Everyone can look at the right-of-way and tell where our mowers usually cut to.”

Wofford said anything outside of the obvious mowing zones is fair game, adding signs that are in front of homes where owners maintain the right-of-ways themselves will not be disturbed.

“There are some signs in front of houses, and technically it is a right-of-way, but the homeowner has mowed the grass,” he said. “We’re not going to mess with those, because we aren’t gong to get the bush hogs up against someone’s property who is maintaining it themselves.”

With that being said, Wofford added that mowing around signs on right-of-ways not in front of homes will also not be tolerated.

“You cannot save your sign by cutting (just) the grass around it,” he said. “If it is within the normal limits that we usually cut to, we will remove it.”