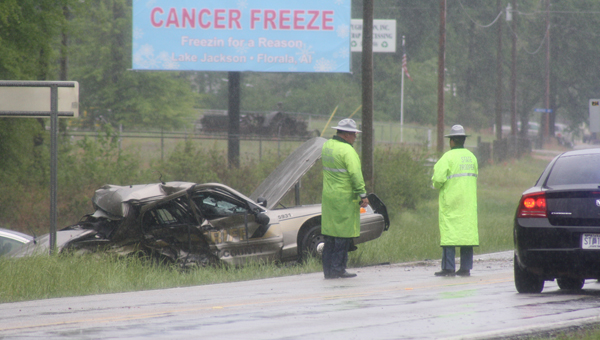 Alabama state troopers are on the scene of an accident involving a Covington County sheriff’s deputy.

A pair of car accidents Friday morning ended in the death of a Covington County sheriff’s deputy attempting to respond to reports of an overturned vehicle on Ala. Hwy. 55.
Deputy Heath Kelley, 46, of Red Level, was killed at approximately 7:40 a.m. when his patrol car struck a vehicle traveling north on the highway. At the time of the accident, Kelley was attempting to reach another car accident – a single-vehicle wreck – farther south on Hwy. 55.
While the accident was still under investigation by the Alabama State Troopers Office as of Friday night, Covington County Sheriff Dennis Meeks said he believed moderate to heavy rainfall played a role in the deputy’s death.
“He was traveling on Highway 55, south of the South Bypass, when his patrol car hydroplaned and struck another vehicle,” Meeks said.
According to Sgt. Steve Jarrett, a spokesperson for the Alabama State Troopers, the driver of the vehicle involved in the collision with Kelley’s patrol car was transported to Andalusia Regional Hospital for what appeared to be non-life threatening injuries. Kelley was also transported to ARH, where he was later pronounced dead.
Meeks said the woman driving the vehicle that overturned was treated for minor injuries at the ARH emergency room and released.