ON TO THE NEXT ROUND 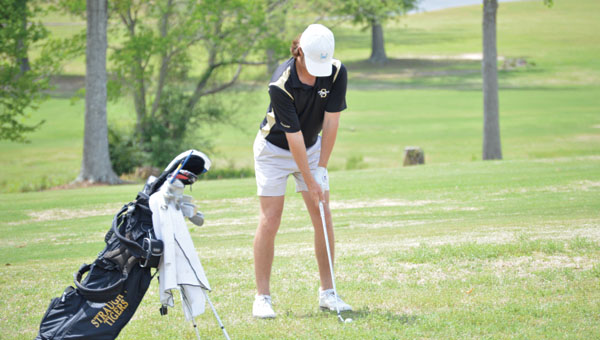 Brooks Rabren finished as the low medalist by four strokes for the day, and his performance earned him a spot to play in the state tournament next Monday and Tuesday at Magnolia Grove in Mobile. | Courtesy photo

Brooks Rabren’s tee shot off of the first tee at Arrowhead Country Club in Montgomery was right down the middle.

That first shot led to the first of seven birdies for the Straughn senior as Rabren finished with a 5-under 66 at the Class 4A Sub-State Golf Tournament on Monday.

Rabren finished as the low medalist by four strokes for the day, and his performance earned him a spot to play in the state tournament next Monday and Tuesday at Magnolia Grove in Mobile.

“I played well,” Rabren said. “I started off the day, and hit a great drive right down the middle. Then I hit a shot on the green about 30 feet just over the top of the flag, and just drained it from 30 feet for birdie.”

Rabren said that first hole jump started the round for him.

The University of South Alabama commit then went on to make five birdies and one bogey on the front nine holes.

“I had a lot of good looks at birdies and a couple eagles,” Rabren said. “I hit it from tee to green other than one hole.”

Rabren said his lone bogey came on the toughest hole on the course, No. 6.

His other bogey came at No. 10, even after hitting a good drive.

Rabren said he hit a wedge shot on the green, but three-putted for bogey.

“Three holes later, I hit a wedge shot to inside of 6 inches for birdie and cruised in with pars and a birdie on 18,” he said.

Rabren said the difference in the round was steady ball striking all day.

“I put myself in great positions off the tee,” he said. “I was really hitting my numbers with my irons and wedges, and I was giving myself a lot of good opportunities to make birdies.”

This will be Rabren’s third straight trip to the state tournament.

He said he’s going ask his future teammates at USA for any advice or information about the Robert Trent Jones Golf Course.

“I’ve only played out there once,” Rabren said. “It’s going to be pretty much a new course for me. I’ll go down Sunday early, and get over there and spend all day at the course to try to get a feel for how things are out there. I’m going to talk to some of my guys on my team from USA, and learn from them and my coach. That gives me an advantage going there to have their insight and help me learn my way around the course.”

In other sub-state action, Opp finished a team-low 352 in its round.

Straughn’s Kristen Peavy gets a two-run home run Thursday. | Josh Dutton/Star-News HEADLAND — In a rematch against Headland for... read more