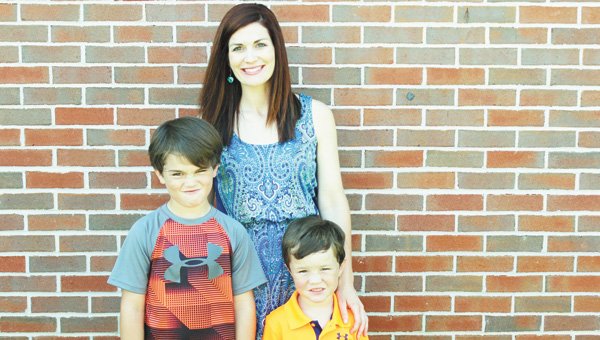 Tori Adams is shown with her sons Parker and Cody. | Courtesy photo

Adams, a Red Level mom of soon-to-be four children, said being a mother is like seeing a part of yourself wondering around the outside of your body.

Two weeks before her first Mother’s Day in 2006, her first child, Parker, was born.

Adams said that day is special because her husband, Kyle, was able to make it home on a two-week leave to witness the birth from serving in the 1/117th Field Artillery Alabama National Guard unit in Kuwait.

“It’s been such a beautiful journey to see him going from infancy to this, not really lacking, but to this pre-adolescent age,” Adams said about Parker. “It’s so much fun. Every stage just brings another joy you can’t experience. You can’t get any better than this.”

In addition to Parker, the Adams have one other biological child, Cody, who is 5 years old, and a foster child.

Adams said another child is on the way.

When asked what made the couple become foster parents, Adams said it was all in seeing what the foster children go through.

“Since I work in public education (as a social science teacher at Red Level High School) and my husband does law enforcement (police officer with the River Falls Police Department), we see a lot of children in displaced situations,” she said. “About two years ago, we started discussing it.

“Last year, we got certified and waited until this year to start doing anything,” she said. “It was just kind of seeing what the kids go through personally.”

Adams said when she and Kyle married, they were open to having children. Tori grew up as an only child, while Kyle grew up with more than one sibling.

“I was an only child,” she said. “I knew I wanted children, but I didn’t think I would ever have more than one. Kyle, he has two other siblings, and he was open to other things.

“Once I had Parker and then had my next child, Cody, I loved the sibling bond,” she said. “We knew that two was a great number.”

When the female toddler foster child entered the family, she was accepted right away, Adams said.

“They love her, especially the oldest child (Parker),” she said. “He always wants to take care of her and provide for her.”

Adams said having a foster child gives Kyle and her the chance to teach their sons about helping those in need.

“It’s been really good for them because they do have questions about her birth mother and parents,” Adams said. “It’s good for them to see that every now and then somebody needs help.”

Adams said the one thing that gives her the most grief is choosing how hard to be with her children.

“It’s hard to pick your battles,” she said. “You just want your children to know how much you love them, but it’s hard for them to know when you’re pushing them too hard. That seems to be the most difficult for me.”

Tomorrow, Adams said she’s going to go to church with her family, have lunch and spend some good quality family time with her children.

One thing that she wants others to know about adopting children is that there are more out there than you realize.

“There were so many children displaced that they needed a foster home, that they had to send them out of county,” she said. “It’s a big fear of opening up your home to kids, but it’s been a really big blessing for us.”

Living on a prayer

The Rev. Leroy Cole and a group of Covington County residents sing “Victory in Jesus” Thursday afternoon during the National... read more