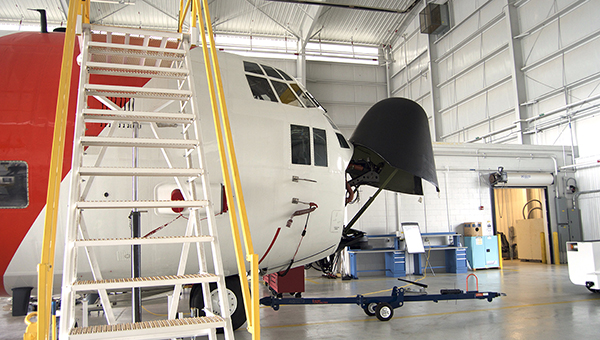 The NASA C130 and UC-12 will be deployed to measure atmospheric carbon dioxide and methane over the central and eastern United States during all four seasons. | Michele Gerlach/Star-News

Almost half-way through its stay in Andalusia, the NASA-owned C130 currently housed at South Alabama Regional Airport has, in some ways, been a tourist attraction.

The Kearns Group of Daleville and Pinnacle Solutions of Huntsville are performing electrical and structural aircraft modifications on the aircraft, which landed here in June.

Billy Mitchell of The Kearns Group explained that a group of eight people from Arizona has been here installing an emergency phone and communications system on the aircraft, even as each of the aircraft’s four engines are being inspected, and routine maintenance is being performed.

Before its Oct. 5 “fly-away date,” the aircraft will be further modified for NASA’s Atmospheric Carbon and Transport-America (ACT-America) mission, in which the NASA C130 and UC-12 will be deployed to measure atmospheric carbon dioxide and methane over the central and eastern United States during all four seasons, and under a variety of weather conditions. Ultimately, the goal is to advance society’s ability to predict and manage future climate change, according to NASA.gov.

Mitchell said the aircraft – often used to transport cargo, smaller aircraft, or paratroopers – will when finished house specialized equipment and a team of scientists.

A number of people will be in Andalusia to conduct that work, Mitchell said.

On Wednesday afternoon, executives from Lockheed Martin also stopped in to tour the facilities. Lockheed Martin is an American global aerospace, defense, security and advanced technologies company with worldwide interests. It recently acquired the helicopter manufacturer Sikorsky Aircraft in a $9 billion deal.

Pinnacle is the prime contractor for the current C130 project.

The Kearns Group, LLC is a veteran-owned small business that offers a diverse range of value-enhanced aviation business development, management, technical and creative services. Andalusia resident Ronnie Kearns is president and CEO of the company, which recently entered a lease agreement with SARA for the hangars.

“We are extremely pleased to be working with SARA in this effort,” Kearns said previously. “The availability of the C-130 hangars along with the cooperation of the SARA Authority, DRS, local leadership and the Covington County Economic Development Commission (CCEDC) contributed to our success in securing this contract.”