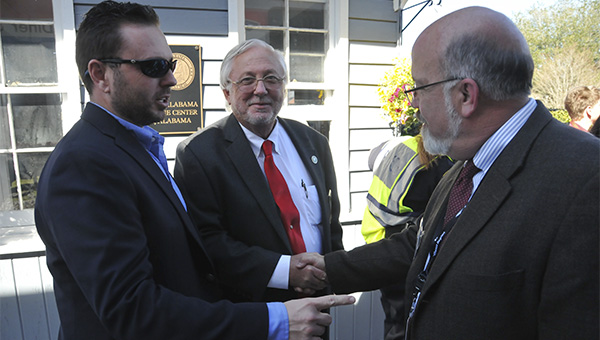 An Amtrak Inspection Train visited several towns and cities Thursday to gauge whether or not its passenger rail service can return to locations along the Gulf Coast.

Amtrak and the Southern Rail Commission (SRC) came together to see if the service can return to the Gulf Coast region.

Greg White, the chairman of the SRC, said yesterday’s trip was great, and added that returning the service is feasible.

“This is Americana,” White said, shortly after disembarking. “We’re excited about the possibility of returning the rails back to Atmore. This is a good step in that direction.”

In the middle of 2015, the SRC commissioned Amtrak to evaluate potential service restoration along the route.

Orlando, Fla., daily. The proposed service would be an extension of the Chicago service.

Alternative A would generate an annual ridership of 153,900 passengers and would require an annual operating funding commitment of $9.49 million, according to Amtrak’s survey.

White said option A would be feasible because the four states the service runs through — Louisiana, Mississippi, Alabama and Florida — would split the cost of having Amtrak return each year.

“That would cut it to less than $2.5 million a year, if we do the daily and round trip service from New Orleans to Mobile,” he said.

White said other costs to be considered include the infrastructure to upgrade the rail and additional train traffic.

“CSX has been very cooperative,” he said.

The positive news, White said, is that from the experience in North Carolina, the states and local governments and businesses didn’t have to put the money up because ridership was better than projected.

White said officials are inspecting the lines to see what improvements need to be made to ensure the safety of the passenger trains on the line.

“There is a theater car and officials from Amtrak, CSX and many of us are inventorying what needs to be done to get the track up to par,” he said.