Conservation officers do investigative work, too 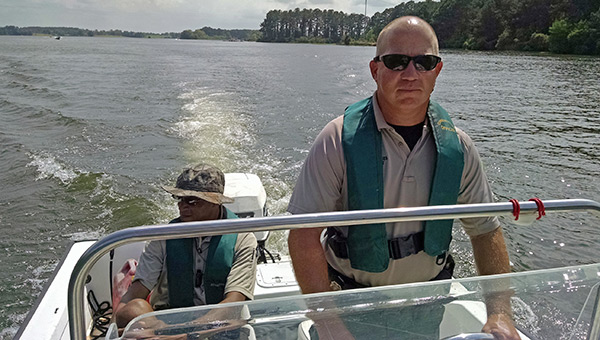 (ADCNR) Conservation Enforcement Officer Vance Wood mans the helm of one of Alabama Wildlife and Freshwater Fisheries (WFF) Division’s boats as fellow officer Bill Freeman aids in the patrol of the inland waterways. Hunting and fishing license checks are just one aspect of a enforcement officer’s many duties.

The bust was supposed to involve hunting deer over bait and hunting at night. During the investigation, Alabama Wildlife and Freshwater Fisheries’ enforcement personnel discovered another significant violation that could occur anywhere in the state. Of the nine people checked during the investigation in Montgomery County, only one had a valid hunting license.

Kevin Dodd, Enforcement Chief with Wildlife and Freshwater Fisheries (WFF), said a complaint from adjacent landowners was initially investigated in December 2015, by Senior Conservation Enforcement Officer (CEO) Vance Wood, who decided to enlist the help of fellow CEO Kirk Smith because of the size of the property, about 1,400 acres. According to the officers’ reports, they logged about eight hours investigating and documenting evidence over a period of several weeks. During that time, the officers began to suspect other violations, including hunting without a license.

On January 17, 2016, CEOs Wood and Smith arrested a non-resident hunter from Florida on the property for failure to wear hunter orange and hunting over bait. Officers observed a corn pile within plain sight about 50 yards from the male hunter, who was in possession of a rifle. After questioning, the hunter told Wood and Smith about eight other non-resident hunters on the property. Because of the number of hunters involved and the size of the hunting area, Wood called in Senior CEO Brad Gavins, who responded from Crenshaw County with his tracking K-9, Holyfield.

The remaining eight hunters were tracked to their stands and subsequently arrested for multiple hunting violations. All of the hunters were then escorted back to their campsite, where they were issued multiple citations. A total of nine non-resident hunters were arrested that day with 29 adult and four juvenile citations issued. The citations included eight for hunting without a non-resident all-game license, nine for hunting over bait (corn), eight for failure to wear hunter orange and eight for failure to possess or maintain a buck harvest record.

When the accused in this case entered guilty pleas last month in Montgomery County District Court, the judge handed out more than $7,500 in fines to the Florida residents.

“I think the fine was appropriate,” Dodd said. “It’s set by law as three times the cost of the license. Sometimes the judges don’t go by that strictly, but I thought the fine was sufficient.

“But what I want to get across to the people who do buy licenses is that when they make the purchase, they are subsidizing the activity of the people who don’t buy licenses. If you know of somebody hunting without a license, blame yourself when you don’t have the services you expect unless you do something to correct it. If your cousin comes from Detroit for the Christmas holidays and you take him hunting without him buying a license, you’re just as much at fault as he is.”

Dodd makes the analogy of another crime that often occurs at large retail outlets.

“I draw a comparison to shoplifting,” he said. “If you’re in Walmart and you witness someone stuffing their coats or purses with high-dollar electronics, are you going to say something? In the end, you pay for it when the store raises prices to counter the loss.

“I consider allowing people to hunt or fish without licenses the same thing. You’re going to pay for it in the end, either through the loss of that wildlife resource or through the lack of services that are paid for through license sales, everything from boat ramps to game wardens to wildlife biologists. Some people don’t think it’s a big deal to hunt or fish without a license, but it’s basically stealing from the public pantry, so to speak.”

“Enforcement doesn’t get any money other than state hunting and fishing license dollars,” Dodd said. “We don’t get any federal money.”

Dodd said it’s not unusual for the CEOs to make cases involving the lack of a valid hunting license.

“It’s very typical that we get a complaint of hunting over bait or hunting at night, and when we investigate, we also find out the person doesn’t have a hunting license either,” Dodd said. “We don’t often go walking through the woods at 4 o’clock checking people for licenses. Occasionally we do, but if we don’t see you at your truck, most of the time you don’t get a license check. Years ago, when everybody dog-hunted, you could walk up and down the road and check 40 or 50 hunters in an hour. But not anymore. Now, most hunters are up a tree and we don’t want to interrupt their hunts.”

Dodd said WFF doesn’t have a handle on how widespread the license violations are.

“What’s disturbing to us is we know there are groups of non-residents and residents who haven’t been checked in years, and they think it’s worth the risk to not buy a license,” he said. “They’re gambling on not buying a license.

Dodd said he is not bashing non-resident hunters because the sale of non-resident licenses contributes greatly to the overall budget.

“There are residents who resent folks from out of state coming in and leasing property,” he said. “We certainly don’t have a problem with non-residents, as long as they buy the appropriate licenses. If it weren’t for non-resident license sales, we’d be in a hole, big time.”

Yet, Dodd has little sympathy for anyone caught hunting or fishing without a license.

“We’re not arresting people who are hungry,” he said. “They’re not doing it because they’re starving. They do it for recreation. They enjoy the activity.”

Participants entered in NWTF shotgun giveaway Do you spend 10 or more days each spring turkey hunting in Alabama? If... read more