At first glance, watercress looks innocent enough. Its deep green leaves are small and rounded, considerably more diminutive than some of its relatives, such as collards or mustard greens. But take a bite of its soft leaves and crunchy stems, and you will find a big, peppery burst of flavor that can be downright spicy. 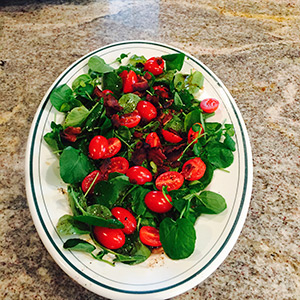 Wild watercress can be found in shallow streams, springs, ponds and lakes. My husband says we cannot grow it here, but I told him I like to buy it in the spring because it looks so fresh and inviting. Cultivated watercress—the kind you are likely to see in the store—takes root in a hydroponic greenhouse system and is very similar in taste and appearance to its wild cousin; the two can be used interchangeably.

In the grocery you can find watercress in bags or bunches. Look for bright green leaves and no signs of yellowing or slimy wet spots. The stems can be thick and wiry so these should be trimmed off. The stems will become tender with cooking but they can still be a bit leggy so are best served with a knife and fork.

Watercress is highly perishable and you should plan on using it within two days of purchase.

Watercress can be eaten raw, wilted, or cooked. The more heat it’s exposed to, the tenderer and mellower it gets. I used it in a wilted salad and it was delicious. I also found many recipes for a watercress stir-fry, so again the watercress would be wilted. It will give a muted peppery backdrop to the chicken and mushrooms in the stir-fry recipe.

Taken from Dig It by John Folse.

Salt and black pepper to taste

The next recipe is from the April/May issue of ‘Fine Cooking’ magazine. It is easy to put together and goes great with rice.

2 Tbs. canola or other neutral oil

1 ½ Tbs. Chinese chile-bean sauce; more to taste (can be found in the Asian section of the grocery store)

Put the chicken in a medium bowl and toss with 2 tsp. of the soy sauce, the sake, cornstarch and ½ tsp, salt. Heat a wok or a 2-inch skillet over high heat. Add 1 Tsp. of the oil and the chicken to the pan in a single layer. Leave the chicken undisturbed for about a minute before stirring, and then cook, stirring occasionally, until browned and partially cooked, about 4 minutes. Transfer the chicken to a bowl.

Return the pan to high heat. Add the remaining 1 Tbs. oil, the chile-bean sauce, and ginger to the pan, and stir to combine. Add the mushrooms, and cook, stirring frequently, until tender, about 2 minutes. Return the chicken and any accumulated juices to the pan. Stir in the broth and the remaining 1tsp. soy sauce. Cook, stirring frequently, until the chicken is cooked through, about 2 minutes.

Remove the pan from the heat and stir in the watercress, vinegar, and more chile-bean sauce to taste. Toss until the watercress wilts. Serve hot.

Monkey created stir in church in 1916

“Here’s the church and here’s the steeple; Open the doors and see all the people.” Do any of you “Baby... read more