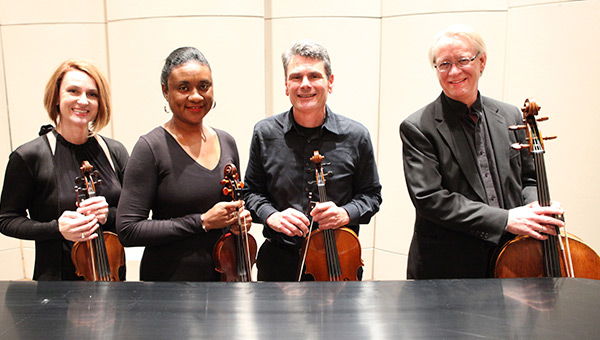 Shown are the members of the James C. Carter String Quartet.

“This promises to be a truly beautiful concert and a delightful way to spend a spring evening,” he said. “Many thanks to the John H. and Grace McMillan Estep Charitable Foundation for providing generous financial support for this series.”

Tickets are $15, with student tickets of $10. They are available at Harold’s Furniture, St. Mary’s Episcopal Church office, LBWCC president’s office, and at the door.

The Quartet is based at Loyola University New Orleans and includes members Rachel Jordan and Amy Thiaville on violin, Allen Nisbet on cello, and Bruce Owen, viola.

Jordan received both a Bachelor and Master of Music from the Peabody Conservatory of the Johns Hopkins University in Baltimore, Md. She is the fifth performer from a family of New Orleans bred musicians and has performed in various venues, including Kennedy Center, the Mozart Festival in Salzburg, Austria, and Washington D.C., and the Music Center of Houston.  nt Barack Obama.

Nisbet earned both a Bachelor and Master of Music from University of Illinois and has an extensive career as a performer and teacher. He played with the New Orleans Symphony, Louisiana Philharmonic for 18 years. He also served as assistant principal cello of the Denver Symphony.

Owen holds a Bachelor and Master of Music from the College-Conservatory of Music.