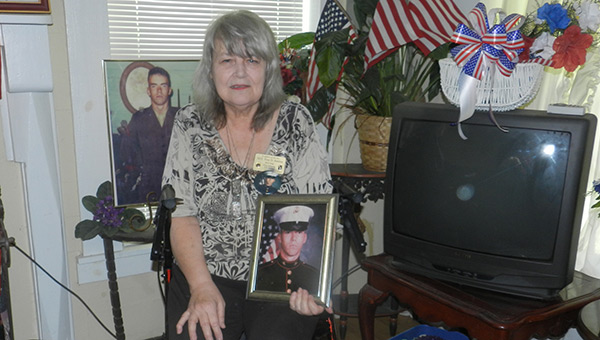 Connie Gibson knows exactly where she was on Sept. 11, 2001, when she heard that planes had crashed into the Twin Towers and into the Pentagon.

“I was reading to my other grandchildren at the elementary school when I learned 911 had happened,” she said.

And her first instinct was to get to her home – then in Repton – and call her son, Sgt. Troy David Jenkins, then stationed in Kentucky. With that phone call, she learned that Troy and his fellow soldiers were on lockdown.

When he called her that night, there was anguish in his voice.

It was October before she could arrange it, and she believes it was only with the help of divine intervention. When Troy asked her to come to Kentucky, she said, she was behind on her bills, was driving a vehicle that couldn’t make the trip, and had no money. Still, she promised to be there.

“To this day, I don’t know how it happened,” she said. By Oct. 5, she was on her way home. She was driving an almost-new van, her bills were current, and she had money in her pocket.

“People kept paying for what I needed,” she said. “I would stop to get gas, go in to pay, and they would say, ‘It’s already been paid taken care of.’ ”

It was a period of patriotism in America, and her granddaughters had made signs for her van.

“People would honk and give me the thumbs-up,” she said.

The visit was four nights and three days.

On the morning she was to leave, she got up at 4:30 to kiss her son goodbye as he left to work. She said she knew then it would be the last time she would see her son alive.

It was the same feeling she felt the day she heard about the 911 attacks.

Troy went to Afghanistan in January of 2002. Later, as a member of the 101st Airborne, he was in Iraq, where on April 23, 2003, he was critically wounded when an Iraqi child approached a group of soldiers with an unexploded cluster bomb, according to the Military Times. Troy Jenkins threw himself over it. He died three days later in Germany.

Gibson, who now lives in Covington County, said she has worked a good portion of the past eight years to get a Congressional Medal of Honor for her fallen son. She has collected signatures for petitions, joined veterans groups, and attended events for Gold Star Mothers in Washington, D.C.

“There are more than 3,000 of us,” she said, adding that she believes those families who lost children to the effects of PTSD after they came home also deserve Gold Star designation.

Her home is filled with mementoes – patriotic quilts and comforters sent to her; photographs of her son; photographs of herself with President and Mrs. Laura Bush, and with Sarah Palin. She has only high praise for TAPS (Tragedy Assistance Program for Survivors), the national organization that assists the families of the fallen.

There also is a portrait of Troy and his first son, memorialized by Kaziah Hancock through the Project Compassion. Hancock contributes portraits of fallen soldiers to their families.

On a sideboard is Troy’s flag, preserved in a special, triangular box along with his military medals, which include two purple hearts.

Health issues that resulted from injuries have slowed Gibson’s travels and activities, but she still wants to get back to work securing the Medal of Honor, the nation’s highest medal for valor in combat, for Troy. She has been compiling signatures, and seeks more. The petition can be found here.

“I love what y’all do for veterans here,” she said of her life in Covington County.