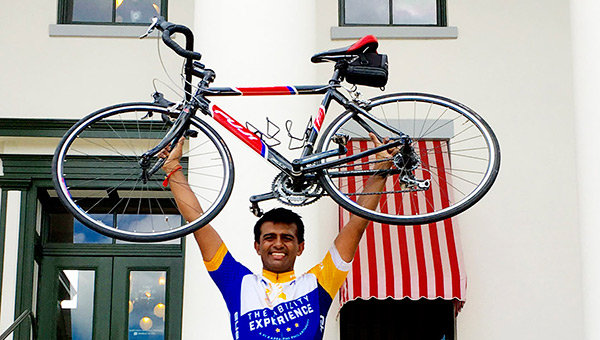 Hiten Patel used to worry he didn’t have what it took to get accepted to and complete dental school.

Now he knows he can.

And it’s not just because he just spent two weeks biking 865 miles through Florida, but because of the people he met along the way.

“One thing I learned from this trip and something I will never forget is that the only disability in the world a person can have is a bad attitude, because without one, anyone is capable of doing anything they set their mind to,” he said Tuesday.

The trip was a fundraiser for Ability Experience, the official philanthropy of Pi Kappa Phi fraternity, Patel’s social fraternity.

Each day, participants biked 50 to 100 miles, but they also stopped for “friendship visits” at centers for persons with disabilities. Some were centers for children, others for adults. At some centers, the cyclists played sports with the residents, at others, they had dance parties.

“As a society, we see people as unable to do things,” he said. “People are able to do anything want to do.”

For instance, he watched a kid who is blind make 10 three-point shots in a row. How’d he do it?

“He loved basketball, and he just practiced.”

The experiences completely changed his mindset, about himself and about people, he said.

The cyclists rode in groups of four, and rotated being the lead person. The lead position is the toughest, he said, because that cyclist takes the headwinds for the group. Stops were planned every 10 miles, but Patel said he chose to stop only every 20 miles to drink water and fuel his body with snacks. The cyclists rode at an average pace of 20 miles per hour.

Most nights, they slept on the floor of a church or YMCA. Every day, they were awakened to Mariah Carey’s “All I Want for Christmas” in the 4 o’clock hour. By 5 a.m., they were on the road. Patel estimates the cyclists burned 3,000 to 4,000 calories per day, and he said he worked hard to consume enough calories.

The first and last days were the most difficult, he said.

“The first day we rode 95 miles from Miami,” he said. “There were strong headwinds. I fell off the bike once and had two flat tires.”

And the last day was hot and hilly.

“There are a lot of hills from Live Oak to Tallahassee,” he said.

The ride ended at the state capital.

Patel expressed his thanks to all who helped sponsor his ride. He raised $3,600 for the Ability Experience through his efforts, and his team of 33 brothers raised a total of $88,000. There are three additional fundraising routes later this summer.

Asked if his family worried about him, Patel said, “My mom hugged me for a good five minutes when I got home. My dad was like ‘What’s up?’ ”

The experience was so good, that Patel plans to encourage all of his fraternity brothers to participate.

“This is something I will tell every guy in the fraternity to do,” he said.

Already, he’s considering another trip for the philanthropy next summer. Build America is a two-month process in June and July that allows participants to spend more time getting to know clients at camps and centers around the country.

While he believes the trip will have a lifelong effect on his life, it has not changed his career plans.

“It made me want to become a dentist even more,” he said. “I didn’t think I could do it. But by me doing this trip, I know that as long as I try, don’t slack off, I can do it.”

The Andalusia High School graduate is headed back to UAB this weekend, and will spend the rest of his summer in class and studying for the DAT, the dental school entrance exam.