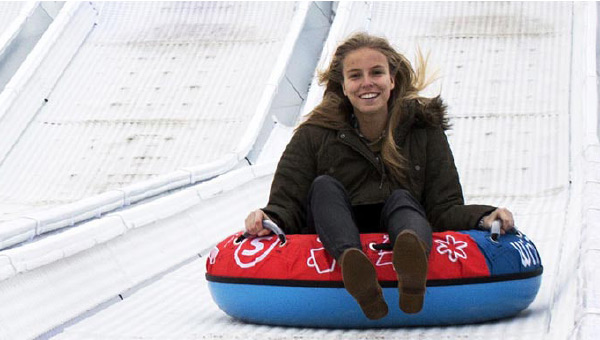 Christmas is 185 days away, but there are good reasons to be excited: It’s going to be better than ever this year.

In addition to snow shows, ice skating and a train ride, there will be a Polar Bear Slide and lighted train tunnel, as well as enhanced decorations.

The Andalusia City Council on Tuesday agreed to spend up to $140,000 to buy the equipment it’s leased for the past two years for Candyland, and add the additional attractions.

Chamber Executive Director Chrissie Duffy said, “For the past two years, we have rented everything we use. For just shy of double what it costs to rent it, we would already be done paying with it.

“I think the evidence shows this is an event that will stick around,” Duffy said. “We’ve done some really great things as a community, I think in order to keep doing it, we need to consider investing some money in to it.”

For example, Duffy said it will cost $32,000 to purchase the skating rink and skates.

“Last year, it cost $16,00 to rent it, and we had to box it up and send it back before the holidays were over. This way, we’ll be able to run it all five weekends in December.”

Skate rentals, and tube rentals will generate income to help defray purchase costs, and there are opportunities for additional sponsorships, Duffy said.

The council agreed to purchase:

• Snow machines mounted on lamp posts for the Square.

• An ice skating rink and 120 pairs of skates. The rink could also be set up in the gymnasium and used to teach hockey during the APPLE program.

• Lighting for the skating rink.

• Theme decorations for the entrance sign near Wells Fargo, the Square entrance to Candyland, Springdale entrance, and City Hall lawn.

“This way, we match all throughout the city,” she said. “I think it will add a lot to the event.”

The decorations are being manufactured locally by Burr Industries, she said.

“In my opinion, Andalusia is going to be in the position of being the Christmas city of Alabama,” Mayor Earl Johnson said. “This year. We’re not talking about in a few years; this year.”

Johnson said smaller cities like Greenville and Monroeville are already “chasing us.”

He said the city has an opportunity to “step out” and establish itself as a December destination.

“Instead of hundreds, we could attract thousands,” he said.

• Agree to participate in a back to school tax-free holiday.

• Authorized the purchase of four replacement cameras for police cars.

• Was told the ongoing sidewalk project should be completed by mid-August if the weather holds.