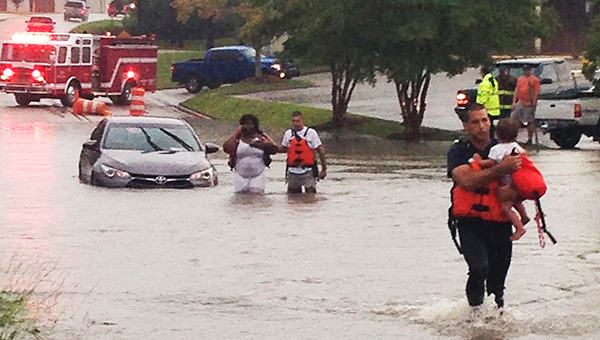 Opp Fire Department’s water rescue unit saved a woman and infant who were trapped in their car on a flooded road Monday afternoon.

“The first time, the people had already gotten out of the vehicle,” he said. “So we had the street department put up barricades.”

Spurlin said another car went around the barricade and the waters were too high.

“They called 911,” he said. “I was actually on the other side of Burger King when we got the call.”

Spurlin said because the current was so swift, the woman needed rescuing.

“We are supposed to get a lot more rain this week,” he said. “That’s what people need to realize. She was only in three feet of water, but you can be swept away by the current in ankle deep water.”

Luckily for the woman and infant, the fire department was able to rescue them.

Spurlin said that it’s crucial especially with the rains that are expected this week for locals to head to barricades.

“In this case, the car went around the barricade and we were able to rescue them,” he said. “Going around barricades caused a few deaths that we worked during the Christmas holiday floods. So, please, if there are barricades up don’t go around them.”

Opp Police Chief Mike McDonald said that after the firemen got the people out safely they had to go back into the water and hook the vehicle up to a tow truck so that the vehicle could be towed out of the water.

“This was an unnecessary risk that was caused by a poor decision. The vehicle operator was issued a citation for their decision.”

“Do not attempt to travel across flooded roadways,” he said. “Do not drive around barricades.”