Andalusia Police Chief Paul Hudson says an arrest has been made in connection with the recent rash of car break-ins. 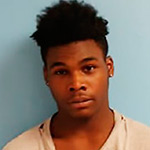 This is an on-going investigation and more charges could be forthcoming, Hudson said. The suspect is also believed to have been involved in a series of car break-ins in Monroeville.

Chief Hudson would like to remind citizens not to let their guard down.

Make sure you lock your vehicles, even in your own drive-way, and do not leave valuables in your vehicle, he said.