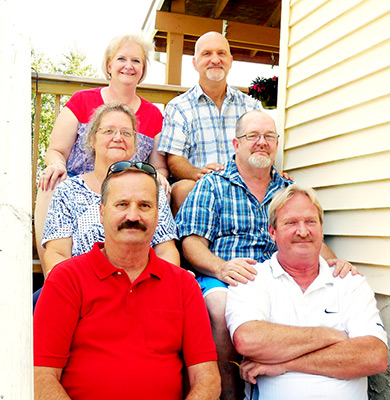 Just last month, a local woman met her five biological siblings 52 years after she was adopted by another family.

Barbara Pilotte was adopted when she was just five days old, and she knew that all of her life. Pilotte said that her adoptive parents were open with the conversation about her being an adopted child.

She never looked into her biological family, until her adoptive mother passed away in 2006, leaving Pilotte her adoption papers.

This was the first time she had seen the names of her biological parents.

She began her research about her biological family online and found that they had been living in Pennsylvania.

She stumbled upon a newspaper article about her four siblings that found their brother, who was also put up for adoption long before.

The article was about the siblings’ reunion with their long-lost brother.

The siblings thought that the fifth brother was the final one of their siblings. Pilotte knew differently.

In just days Pilotte went from being an only child to being the youngest sister of six kids.

In July of 2017, a family member of Pilotte helped her get in touch with her biological siblings to let them know that they had another sister.

The siblings asked their father if this was true and he confirmed it.

Pilotte and her siblings began sharing photos, only to be told by them that she looked just like her mother.

“It was weird seeing people I look like,” Pilotte said. “I didn’t look anything like my adoptive parents, so it was different.”

It only took a month before Pilotte had a flight booked to meet her siblings face-to-face for the first time.

Her siblings picked her up from the airport on Aug. 18 to celebrate her 52nd birthday.

“They picked me up with a bouquet of flowers in hand,” Pilotte said. “There were 51 carnations and one rose; one carnation for every birthday we had spent apart, and the rose for the one they were celebrating with me.”

The siblings also had 52 cupcakes waiting for her, each holding a number from one to 52.

They also gave her a bracelet with five charms, representing each sibling with their names and birthstones.

They spent time together in Pennsylvania going through old photo albums and sharing life experiences.

As if this wasn’t all interesting enough, Pilotte has a daughter named Emily, who is currently pregnant with Pilotte’s grandchild.

Pilotte’s biological mother’s name is Emilie, something Barbara didn’t know when she named her daughter.

“I would like to make another trip to see them next year,” Pilotte said. “This time I am going to take my family with me to meet the rest of our family.”

Alabama has the third highest adult obesity rate in the nation, according to The State of Obesity: Better Policies for... read more