Off to see the ‘Wizard’ 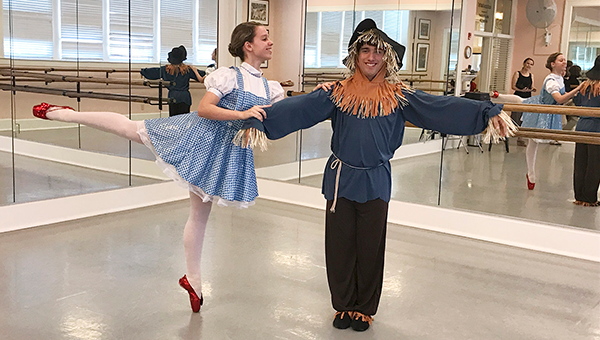 Abby Livingston and Jonathon Weed rehearse for ‘Wizard of Oz.”

The Andalusia Ballet will showcase graduating seniors Abby Livingston and Jonathon Weed in “The Wizard of Oz” during its annual Spring Showcase next weekend.

“Mrs. Murphy told me once, ‘Your senior year, we’re going to do Wizard of Oz,’ ” Weed said. “I think she saw in both of us, as seniors, our strong points are in character. That’s where we thrive the most. Abby is very good at ballet, but when we’ve done character roles is when we did the best.”

“I’m super excited,” she said. “I have watched Jonathon do Rat King and the prince and Harlequin doll. He’s just stolen every role, just completely.

I think the audience will go home talking about Jonathon Weed, and I’m so excited to see what he’s going to do with Scarecrow. He goes all out in a performance.”

The two agreed that the familiarity of the story has increased the interest in the performance.

“Telling people at the elementary school, “I’m going to be the scarecrow,’ they’re amazed,” Weed said.

Livingston said she dressed as Dorothy for Halloween for several years. Now, she’s grown accustomed to the younger dance students greeting her with “Hey, Dorothy.”

The audience will find many familiar parts of the Oz story in the performance – from munchkins to monkeys to witches. Sydney Ward is cast as the Good Witch; Lindsey Stephens is the Wicked Witch; Kole Varner is Tin Man; and Drew Correrro is the Lion.

“Lindsey completely encapsulates that role of the bad witch,” Weed said. “You don’t expect it from her, but she has like this switch when she becomes the witch. With Lindsey, you expect this classical ballet. She brought it to another level.”

Livingston added, “Sydney is the good witch. She’s got this ethereal quality. She will capture the role very, very, very well, I feel.”

Livingston has been dancing since age 3.

“It’s been an integral part of my life for as long as I can remember,” she said. I really enjoy dancing and acting, and I think (this role) is the perfect opportunity. “

She plans to pursue a degree in computer software engineering at Auburn.

“I have always loved learning new languages,” she said. “Coding is a language in itself … It’s just a new language with more math.”

Weed, who also has danced since he was a small child, plans to pursue a multimedia journalism degree at the University of Montevallo. He also has been a member of the Andalusia High School band, is a member of FCCLA, and is very active in St. Mary’s Episcopal Church.

He is the son of Jon Weed and Beth Weed, and has a twin sister, Catherine. He is the grandson of Martha Duggan and John Earl Duggan.

Weed said it is fitting that they share the lead in their last Andalusia Ballet show because they are such good friends.

“It sort of portrays how close we are,” he said. “I’ve seen a lot of seniors throughout Andalusia Ballet history. We’re very good friends. We went to both proms together. I very excited to do Wizard of Oz with Abigail.”

Livingston said she things Wizard of Oz is a metaphor for life as a senior.

“The whole theme of Wizard of Oz is you go off to the Emerald City, you have your fun, but you always want to come home,” she said. “I think it’s a very good way to close senior year. “