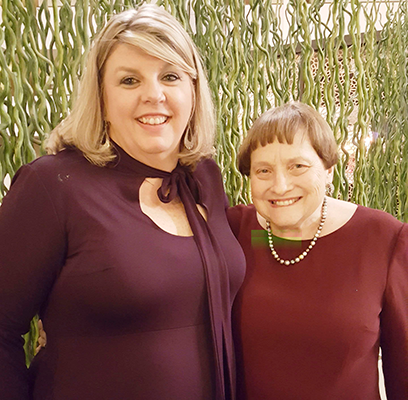 Mellisa King, left, became district governor of the Pilot Club this past weekend. She is shown with past District Governor Carolyn Davis, who was honored this weekend with the district’s Jo Vaughn Leadership Award Courtesy photo

From just joining the Andalusia Pilot Club to becoming the district governor for all Pilot Clubs throughout Alabama, Mellisa King has worked hard the past 10 years.

“I joined in 2008 or 2009,” King said. “I joined because I really wanted to give back to my community and by then my children had grown up and moved out and I had a lot of free time.”

She took over in her new official role this past weekend.

King said she recalls her first district meeting as a new member, being shocked and in awe about what exactly the Pilot Club does for communities nationwide.

“It was just amazing finding out that Pilot Club does way more than just encouraging brain safety and health,” she said.

“I just remember getting involved. I never would have imagined being governor.”

King was the secretary for the district for two years before becoming governor-elect.

“Once you’re governor-elect, you become governor the following year. I’ve known I was becoming governor for a while,” she said.

As for what King has planned for the organization, she says that she will continue to pursue growth.

“My goal is to grow the district, we’ve already gained 54 members so far. I also want to educate more people about what Pilot Club is,” she said.

“We’re going to continue to mentor Anchor Club members as they are our future leaders. I also want to help clubs that are struggling to keep going.”

King says she isn’t nervous for her new role.

“I’m very excited to take on this responsibility,” she said.