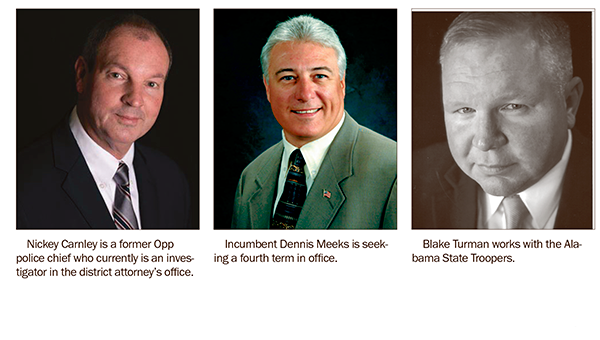 What would you consider the top issues of this campaign?

CARNLEY: “I would have to say drugs and crime. That is why I am running for sheriff, so I can arrest those people and get them off the streets.”

TURMAN: “Leadership and in my opinion, accountability. As sheriff, I want to give the people what they deserve.”

If elected, whom would you appoint as your chief deputy and why?

CARNLEY: “I haven’t announced who I would appoint. I am running for sheriff of Covington County and that ballot only has one spot, not two. The sheriff is the face of the department, whatever happens it falls on your shoulders. What I can say, is that the person who I appoint will have the same passions as I do, he will be as experienced or more experienced than I am and that they will do their best with all their heart because it is their calling. I believe that before I start building the department I have to get elected.”

MEEKS: “I would keep David Anderson as my deputy chief. I’ve got good personnel, which is why we’ve been so successful. It is all due to the staff that we have.”

TURMAN: “I will be appointing Todd Grimes. I know of no better man for the position. He a strong work ethic that is contagious and I believe other people will want to work with us because of how strong his work ethic is. I know he has the same core values as I do.”

If elected, what changes would you make in the office?

CARNLEY: ““I will make the sheriff’s department more efficient and effective. I will start addressing issues of the people. As a leader, that is what the sheriff should do.”

MEEKS: “I think the biggest issue right now that I would change is the need for school resource officers. I think we need to get something done to cover the schools.”

TURMAN: “I will make sure the sheriff’s department is more transparent. I want the paramount of the department to be policing. I also want to communicate with the community so they can help with their safety. I want to increase patrol efforts to decrease crime. We want to be highly visible everywhere you look. I believe that increasing patrolling will decrease crime because we will be there on the street where it’s happening. I want to ensure that crime is investigated to the fullest extent and taken seriously. Also, it is important that we take care of the people that take care of us, the staff is so important and deserve all the thanks in the world.”