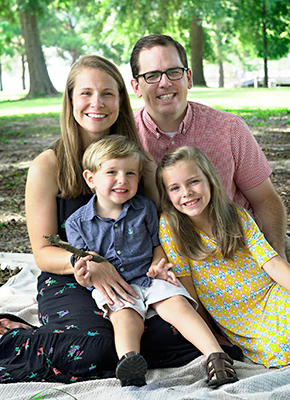 Laura Ashley, Lee, Holland Grace and James Harper are preparing to move to Belgium, where they have made a long-term commitment to missions. Courtesy photo

A sending God: Harpers prepare to serve in Belgium

Lee and Laura Ashley Harper are having a moving sale at their home on the Heath River Falls Road today. But the effort looks more like an estate sale, as the young family is selling almost everything they own in preparation for a move to Belgium, where Lee and Laura Ashley have committed their lives to missions for the foreseeable future.

If Lee, who has served as youth pastor at Bethany Baptist for the past three years, always knew he would be a minister, Laura Ashley didn’t plan to be a minister’s wife.

The couple met at the University of Mobile where Laura Ashley Ingram was a pre-law, and later a public relations major. Lee is a native of Montgomery; Laura Ashley grew up in Andalusia.

They were friends long before they dated.

“What drew me to him was his deep love for the Lord,” Laura Ashley recalled. “Not a lot of guys were expressing their spirituality. He also had a respect for women that you don’t see a lot of.”

It was after they were engaged that Laura Ashley began to get a feel for life as a minister’s wife when she began attending the church where Lee was a student pastor.

“I got an idea what that part of my life would be like,” she said. “The Lord drew me to it.”

In seminary in North Carolina, they both worked fulltime jobs as Lee pursued his studies. As part of his studies, the couple served two years overseas.

They started praying about overseas service when they were given prayer request cards for different countries with specific prayer requests in each country. At some point, their prayers moved from, “Send someone,” to “Where would you send us?”

Laura Ashley said she knew the couple would serve in missions before her husband realized it.

“God is a sending God. Why would we not go?” she said. “Especially when so many don’t know the full gospel.”

Lee said he never thought he’d be a missionary because for him, the notion immediately evoked the image of someone living in the African jungle hunting his own food.

But they soon found themselves in a mission field in one of the world’s biggest cities – London – ministering to North African and Middle Eastern Muslims.

The assignment was not unlike the one to which they are headed in Belgium.

“In Belgium, there is a deep history of Christianity, but it is a post-Christian culture, Lee said. “Seventy percent of those ages 18 to 29 are atheists. Only half of those who identify as Catholic attend church. In reality, it means nothing to them. They say they are Catholic because their parents were.

“If you look at Europe, this is where America is going to be culturally,” Lee said.

The couple has taken an assignment with the International Missions Board of the Southern Baptist Church. They are making a long-term commitment to serve in Ghent, Belgium.

“In a city of 300,000, there are only 300 people in evangelical churches on any given Sunday morning,” Lee said. “Our role will be to help them grow their congregations.”

The couple’s goal is to be college-level proficient in their Dutch in the next two to three years. As they are learning the language, they’ll also get to know those 300 evangelicals who attend church in Ghent on Sunday mornings, and will disciple them. As they become better speakers of the language, their responsibilities will grow.

Tomorrow is Lee’s last day at Bethany, and he’ll deliver the sermon. Next week, they’ll finish cleaning out their home and have people pick up the things they’ve already sold.

“We’ll spend time with family, then go to Richmond, where the International Missions Board is headquartered,” Lee explained

They’ll live in campus housing for the next few months as they prepare to move to Belgium in early 2019. Bethany Baptist is their sponsoring church, and the Harpers’ church memberships will remain there.

“Bethany has been great,” Lee said. “They have been supportive, loving and kind to us. You aren’t guaranteed that.”

Laura Ashley added, “We are blessed that they have loved us well. We pray they will come and see us, and be proud of the work we are doing.”

In Belgium, Holland Grace will enroll in a public school, and James will be in a pre-K program so that their parents can attend classes daily. The thought of leaving Holland Grace in a school where she doesn’t speak the language does give Laura Ashley pause.

“We have prayed, and God has shown us that as much as we love her, He loves her more,” Laura Ashley said. “We prayed that she would come to trust in Jesus. On Easter Sunday, she was baptized. I know that the Holy Spirit will be with her.”

When they move in early 2019, each family member can take three suitcases, and other items will arrive later in one shipping crate about the size of their current dining room table.

The couple said the most difficult thing to leave will be their table, which has been the site of meaningful conversations with friends and members of the Bethany youth group, as well as a gathering place for their young family.

The Harpers will return to the U.S. every few years for a few months. To receive updates, email them at harpersineurope@gmail.com.

One of Andalusia Elementary School’s new special education teachers, Sara Beth Leverette, said that no matter what, her students can... read more