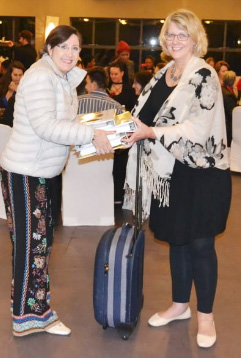 This is not the first time that Olson has taken ultrasound machines to South Africa.

“Pregnancy centers will donate their ultrasound machines,” Olson said. “And if they are newer than 10 years, we will transport them to other countries where they can’t afford them. Last year, I took one to South Africa. Each time you take them, you have to hand carry them, because if they put them in the checked in luggage, it is hard to get them through customs because some of the airport workers will try and take them and sell them.”

Recently, Olson was recognized at the Heartbeat International Conference for 25 years of ministry.

“Heartbeat provides services internationally as well as national,” Olson said. “They provide service for pregnancy centers, mother’s homes, babies’ homes, orphanages and they do anything that has to do with babies and life.”

Olson has also written several training manuals for other countries to deal with miscarriages, stillbirths and sexual wounding.

“I have been in and out of Africa working for the past five years,” Olson said. “I have trained 13 countries in recovery work, which is where you go in after a sexual wounding and provide care.”

On Tuesday, Olson received a phone call from Flutter, which is the company that sends the ultrasound machines.

Olson has to buy her plane tickets by July 7.

The reason that Olson does these trips is because she knows that women are hurting all over the world.

“When I moved here, I didn’t realize how rampant sexual abuse was,” Olson said. “Along with miscarriages. So, here in Andalusia, I do a lot of the sexual wounding, prayer and miscarriage bible studies. My manuals are written so I can train people to do those bible studies in other countries. When I get to the other country, I do the bible study with the people first to make sure that those people have gone through healing, then I start picking from those people to become facilitators, then when they have facilitated about six or seven times and have a good feel for it, I teach them to train other people and I pass the mantle off.”

Olson said that one person could impact across the world.

“Amy Davis attended one of my stillbirth bible studies,” Olson said. “She then started a blog and it has reached to more than 26 countries. It just goes to show that you never know what God will do throughout the world.”