Local football stars sign to play at next level 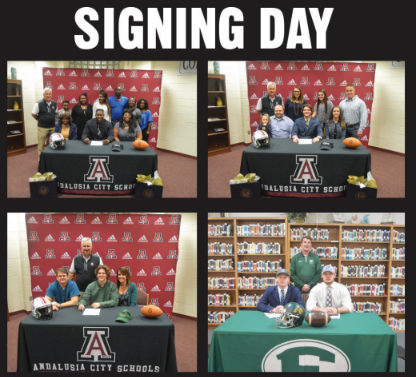 Jones said he decided on Wingate because of the campus atmosphere.

“They have an amazing campus, teachers and a love to help athletes,” Jones said. “I also love to fish and they have a huge pond on campus. The trainers are cool, and I just like the way they run things up there.”

Jones is part of the senior class that went to the fourth round for three years of his high school career.

“Looking back, my favorite memory is us coming closer as a family,” Jones said. “This year we formed a stronger bond and became a family and I think that helped us a lot throughout the season.”

Jones was voted Alabama first-team all-state for his position on the offensive line.

“I’m ready to continue to get stronger,” Jones said. “I just want to better myself as a player and a person. First off, I want to say thank you to Coach Windham, he helps me a lot. I want to thank my family and Coach Goldman. They all made sure that I was doing what I was supposed to be doing.

“The college itself is amazing,” Smallwood said. “It’s just beautiful up there, and I get the opportunity to go to the same college as my brother [Jean Jones] we grew up from third grade up until now. Now I plan on spending another four years with him.”

Looking back at his senior season, Smallwood said receiving his first offer was a big highlight.

“That first offer was kind of a weird feeling,” Smallwood said. “Just because I didn’t know if I was going to be able to make it and be able to play college football. Then getting the news that Jean got the offer too, it was surreal.”

Smallwood said the getting the summer plan for workouts is something that he is looking forward too.

“I’m ready to work through that and see how hard that is going to be,” Smallwood said. “I’m excited to work out with Jean, of course. Conditioning by myself was going to be hard, but now I have him to do it with me. I really appreciate all that my family did for me and supporting me all the way through. They told me every day to keep working harder and I would get to the next level. Some days I would get down, but look at where I’m at now.”

Andalusia High School senior Reese Burkhardt signed with the University of Alabama in Birmingham to kick for the Blazers.

“UAB was a really good fit for me because my brother is already there and UAB and Auburn were really the only two schools I was looking at,” Burkhardt said. “UAB has a really good dental program, which is what I want to go into, so it was just a perfect fit.”

Although his senior season was split between kicking and playing tight end, Burkhardt said he wouldn’t change a thing.

“I feel like playing tight end made me feel like I was more a part of the team,” Burkhardt said. “I just really enjoyed playing another position than kicker this year.”

Looking forward, Burkhardt said he is going to focus on his kickoffs.

“That is the main thing the coaches want me to work on,” Burkhardt said. “It is just five yards back. So, it shouldn’t be too tough.”

Burkhardt said he wouldn’t be where he was today without his coaches.

“Freshman year I was 5’5” 120 lbs,” Burkhardt said. “So, the weight room definitely helped. Just everything they do here at Andalusia helped.”

Florala’s Andrew Aplin said he chose Faulkner University because of its Christian values over a larger campus after a miraculous recovery following knee surgery.

“I visited multiple campuses,” he said. “I visited Alabama and I visited Birmingham-Southern, but they are party colleges. Just too much alcohol, but Faulkner is a Christian campus. It’s all about God. Biblical classes I can take. In fact, I have to take. It felt like home. It’s a smaller campus; easier to walk back-and-forth to class. Really welcoming.”

“The coach really automatically clicked as a father-figure,” he said. “A lot of the things I was used to. Just the right amount of different.”

Looking back at his senior season at FHS.

“I had major knee surgery. Only played a few games,” he said. “They didn’t think I was going to be able to walk again, but God stepped in.”

Aplin was able to use his junior season film to impress the coach.

Looking forward, Aplin said he’s ready to make more memories and life lessons that football has always taught him and he’s excited to have classmates come with him.

He also gave a shout out to Coach Daniel Green, whom he said has been there through all the coaching changes through the years.

“He’s been the main father-figure, and he brought me up from nothing.”

Florala’s Logan West said that after visiting Faulkner University and meeting with coaches, he felt it was the best fit for him.

West, who was very modest about his accomplishments this season, said the highlight was his team finishing off with an 8-3 record.

“That’s the best record we’ve had in a long time,” he said.

Against Houston Academy in November, he had 290 yards rushing and 278-yard passing, giving him one of the best games in the state for total offense last season.

Looking ahead, West said Faulkner has a really great strength and conditioning coach.

“I’m just looking to get bigger, stronger and faster,” he said.

He was thankful to the people who helped him get to the next level.

“Thank God, first off, for allowing me to play the game and giving me the ability,” he said.  “I’d like to thank the coaches who have worked with me throughout the year, and my parents for all their hard work into me playing this sport.”