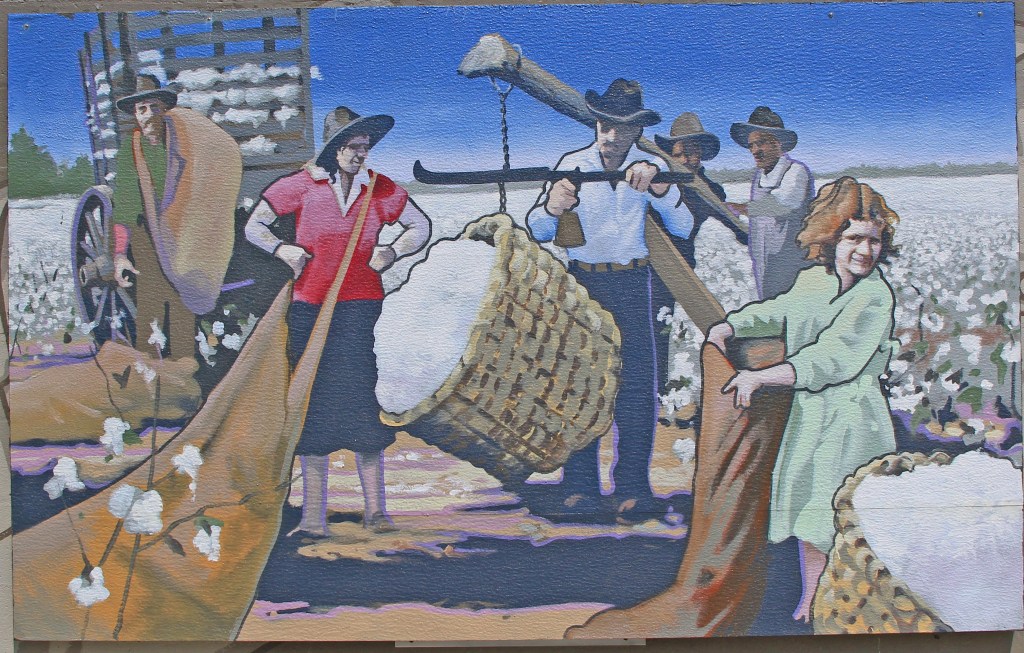 In about 2010, Mrs. Palmore and Hazel Griffin, along with their husbands, visited Chemainus, British Columbia. The little town (population 4,000) is home to more than 50 murals and considers its murals project the world’s leading community-driven art tourism experience.

Mrs. Palmore returned to Andalusia determined to implement a similar program here. After she pitched the idea to the Andalusia City Council, a Murals Committee was formed as a subcommittee of the Tourism and Relocation (now Events and Hospitality) Committee. She also worked to raise private funds for each of the murals, which depict different aspects of the community’s history.

Those visual histories brought to life the Legend of Andalusia; documented timber, cattle, textile and utilities industries; memorialized the marriage of Hank and Audrey Williams; celebrated the history of the World Championship Domino Tournament; harkened the days when young people spent their spare nickels and dimes at the soda fountain; documented each of the county’s previous courthouses; and focused on early schools.

The most recent one, Parade on Three Notch, features 92 portraits of people who have lived in Andalusia, and one rather famous one who just visited – former Miss America Yolanda Betbeze, the first Miss Alabama to win the national crown.

Mrs. Palmore and the committee have worked with murals artist Wes Hardin on each of the projects, as well as the restoration of the mural-sized Snowdrift shortening advertisement.

The current project is The History of the Three Notch Trail, which will be installed on the building currently occupied by the LAAC. The mural, also designed with the help of Hardin and based on research by Palmore and committee member Chuck Simon, features four panels depicting the evolution of the trail. The trail was first used by Native Americans. Later, the Three Notch Road, or “Three Chopped Way,” was designated as such because of triple slashes on trees left by the surveyor marking the route for the Federal Road, according to a history of Alabama highways published by the Alabama Department of Transportation. While it was cleared for wagons in 1811, the primary purpose of the Three Notch Road was to expedite communication and transportation between military posts at Pensacola and Fort Mitchell. It eventually was used by settlers moving into the area.

Mrs. Palmore hopes this mural will lead to Andalusia being named a Three Notch Scenic By-Way, and the development of an interpretive center where students can learn more about the Trail’s history.

The murals are included on a state website documenting Alabama’s murals, and the Hank and Audrey Williams mural, located where the two wed, is included on the Alabama Department of Tourism’s Hank Williams Trail. It often draws tourists, including tour buses, who photograph the mural or pose in front of it.

The resolution in Mrs. Palmore’s honor said, in part, “Whereas, Mrs. Palmore has personally led the fundraising efforts for those projects; and Whereas, the murals will educate and entertain Andalusians for generations to come; Now, Therefore, Be It Resolved that I, Mayor Earl V. Johnson, on behalf of the City Council of Andalusia, Alabama, and all of its citizens, do hereby recognize the contributions of Mrs. Pat Palmore to the culture and quality of life of this city.”