58.6 percent of Andalusians have completed census 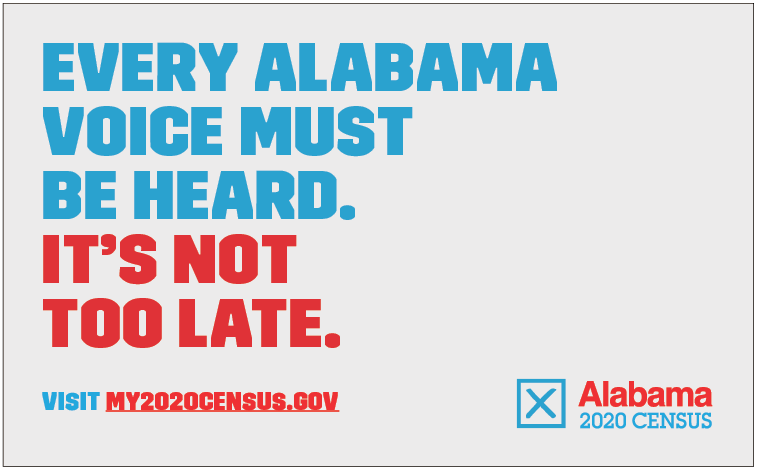 As of Friday, 58.6 percent of Andalusians have self-completed the Census, based upon the Census Bureau’s estimates of the current population.

That’s slightly higher than the county’s level of participation, and slightly behind national and state self-completion rates.

Alabama Census Coordinator Carletta Singleton said Friday that Census workers, who had been stalled by the pandemic, returned to duty in May and have been completing field work to make sure residents of college dorms, nursing homes, jails, and other group housing are counted.

Beginning August 11, Census workers will go door-to-door to follow up with non-responders who have not returned their Census form by mail, or completed the form online.

“Our workers will be wearing personal protection equipment and using hand sanitizers,” she said. “We have been doing a pilot test to see what responses we can get in the field, given the pandemic.”

Andalusia Mayor Earl Johnson encouraged local residents who have not yet completed the form to do so.

“It takes less than six minutes to do this,” he said.

“Based on our 2010 count, the U.S. Census Bureau estimated Andalusia’s population was 9,015,” the mayor said. “That’s just under the threshold of 10,000 residents that we need to make Andalusia an attractive location for many businesses.

“But we also know that our official population count was low, because the U.S. Census Bureau has determined that Andalusia and Covington County have areas of undercounted population,” Johnson said. “It is our goal to make sure every Andalusia resident – young or old, rich or poor, and regardless of skin color or ethnicity – be counted this year.”

The 2020 Census will dictate the distribution of more than $675 billion in federal funding to local and state governments. This funding supports schools, healthcare, infrastructure, community assistance and more. And its impact can last for decades to come in more ways than one. It is estimated that in 2016, more than $13 billion was allocated to the state of Alabama from programs affected by the previous census.

Rates of those who have self-completed the 2020 Census