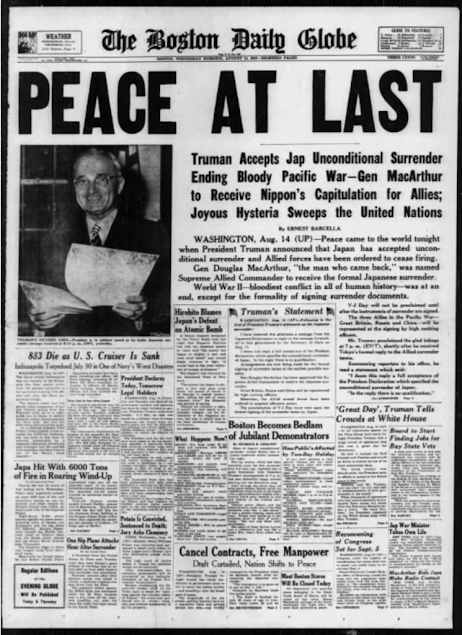 President Truman and his Army Chief of Staff, Gen. George C Marshall were both veterans of WW I. They remembered a prediction made by Gen. John Pershing at the end of that war: “If Germany is not occupied after WW I, there will be another war within two decades”. Having seen that prediction fulfilled, both men were determined to see that both Germany and Japan were occupied after WW II.

The acceptance of the Potsdam Declaration by Japan finally came after three significant events: the US  dropped the atomic bomb on Hiroshima on Aug 6, 1945; Russia invaded Japanese held Manchuria on Aug 8, 1945 and the US dropped the second atomic bomb on Nagasaki on Aug 9, 1945. President Truman warned Japan of the coming destruction after the bombing of Hiroshima and that if they failed to accept the Potsdam Declaration they could “expect a rain of ruin from the air, the like of which has never been seen on earth”. Still, the Emperor and his advisors held out hope that they could negotiate a more favorable settlement if the Russians would act as an intermediary. That hope was dashed when the Russians invaded Manchuria on Aug 8, 1945. It was apparent that Japan would soon be fighting a war on two fronts if the US proceeded with an invasion. The shock of the Russian invasion and the bombing of Nagasaki caused the Emperor to declare that “peace is preferable to destruction.” The United States was informed via cable sent through the Swiss diplomatic mission in Washington, DC. At 7:00pm EDT, Aug 14, President Truman addressed the nation and announced the surrender. He said that the “proclamation of V-J Day must wait upon the formal signing of the surrender terms by Japan”. The President declared a two day holiday and the nation celebrated V-J Day on Aug 15.

US military personnel casualties were something over 407,000 killed and over 660,000 wounded [this includes the European and the Pacific war].  If the planned invasion of Japan had gone forward on Nov 1, 1945, it was estimated that the US could lose between 250,000 and a million men. Estimates of Japanese losses were between 5 and 10 million of its people. The United States had broken the Japanese diplomatic code early in the war and had access to most of their wartime communications. Based upon the deciphered Japanese cables, it was known that Japan planned to mobilize every man, woman and child to fight to the end. They even planned to dress everyone in a similar manner so that soldiers would look just like civilians. After looking over Japan’s secret defense plans, US planners came up with an ominous conclusion – there would be no civilians.

Even with the war ending on Aug 14, Japanese casualties were catastrophic. The Relief Bureau of the Japanese Ministry of Health and Welfare reported that over 800,000 civilians and 2,121,000 soldiers and sailors had been lost.

To help understand possible US losses if Japan had been invaded, it is important to look at the future plans of the War Department for adding more troops to the invasion force. In early 1945, the War Department made plans to ship 400,000 soldiers from Europe to the Pacific theater, to arrive between Sep 1945 and Jan 1946. An additional 400,000 soldiers were to be trained in the US and shipped to the Pacific theater by Apr 1946. The combination of the use of the atomic bomb and Russia’s attack in Manchuria saved many lives, both US and Japanese.

The militaristic expansion that Japan had begun with the invasion of Manchuria in 1931 would end with their formal surrender to the Allies aboard the battleship USS Missouri [BB-63]  in Tokyo Bay on Sep 2, 1945. That date thereafter would be the official V-J Day.

Those historians who are critical of the United States actions during WW II, including the use of the atomic bombs, can never prove their “what ifs?” There is one overriding, indisputable fact: both Germany and Japan have flourished and exist as free, productive countries today. A large factor in their recovery and rebuilding after the war was the magnanimous gift of aid by the United States. In 1948, the United States passed the European Recovery Program, better known as The Marshall Plan , which transferred over $12 billion [$129 billion in 2020] in aid to Western European countries [including Germany]. Between 1946 and 1952, the United States invested some $2.2 billion [about $18 billion in 2020] in Japan’s reconstruction efforts. Today, Japan is one of the largest trading partners of the US.