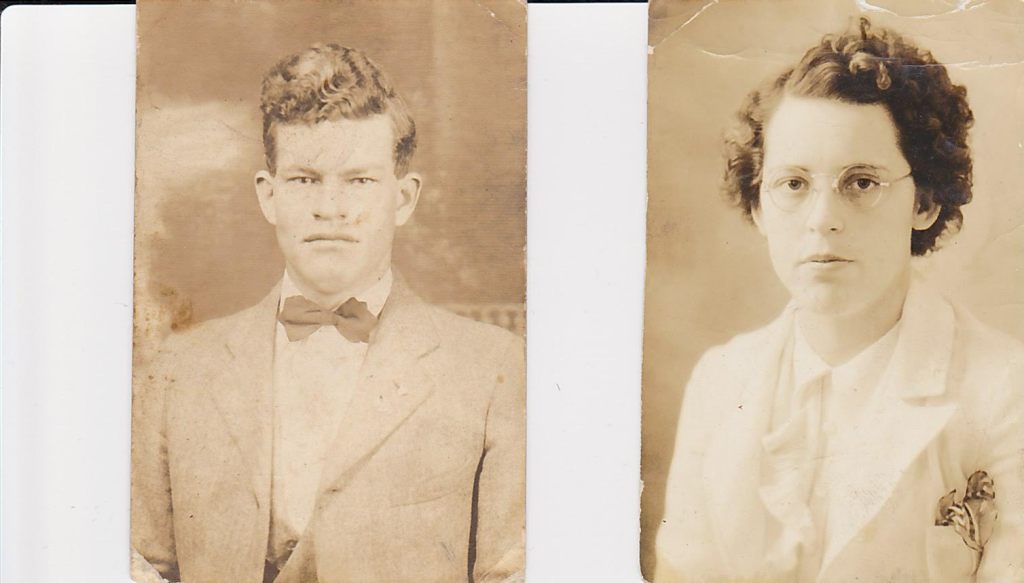 John Chesley Thomasson was the second son of Frank Thomasson and Beulah Sasser. Chesley was born in 1906 in Covington County and died at a reasonably young age in 1952 in Andalusia from cancer of the throat. He was tall and slender in stature and had lots of wavy hair which turned grey early.

Chesley grew up on his dad’s farms and helped with the work. As an adult he chose plumbing for his livlihood and early on carried his tools in a croaker sack, but he later purchased an older red truck to help with his business. He especially enjoyed fishing and playing checkers and dominos. As a young man he married Ruby Houston who left him after a short time. He was later married in 1937 to Bessie Lee Kirkland, daughter of Ezra Levi Kirkland and Lola Fuqua.

Chesley and Bessie made their home in Andalusia with residences in Libertyville and later in the Adellum community. Their house in Libertyville burned circa 1950, so they built a new house near Adellum Baptist Church, which was in the community where most of his relatives resided. Chesley was suffering from cancer and wanted to locate his wife and children near relatives. He passed away a couple of years later leaving Bessie a widow with three young daughters. Bessie was later married to George Palmer, a widower, who had been married to Bessie’s sister, and they made their home in Panama City.

Melba was married at a young age to Jim Paul, son of Daniel Leon Paul and Jessie Alma Strickland. They were married in 1953 in Andalusia where they made their home. Jim worked at Alatex until it closed and then opened a mobile home park on the Florala Highway. Melba also worked at Alatex until she became disabled. Jim is remembered for the loving care he gave his wife. They were the parents of three children: Debra Ann, b. 1955, m. Johnny Wayne Hoomes; James Michael, b. 1957, m. Loris Hassell; and John Richard “Ricky,” b. 1959, m. (1) Dana Ruth Ray (2) ? (3) Lacresia Watson.

The oldest child, Debra, was married in 1972 in Andalusia to Johnny Wayne Hoomes, son of John Willis Hoomes and Mildred Vivian C. Gulsby. Johnny owned and drove a semi-truck, and Debra helped her dad at the trailer park. They were the parents of two daughters: Chastity Diane, b. 1975; and Lisa Michelle, b. 1977. Diane has two daughters, Allison and Kayla, and Lisa has a couple of children.

James Michael Paul was married in 1980 in Andalusia to Loris Hassell. They made their home in Andalusia and are the parents of one daughter: Tessa Kaye, b. 1984, single. Tessa was graduated from Troy U. with a major in graphic design and works in the office of the Mayor of Troy. Mike has worked with commercial tires since 1979, and Loris retired from working at Covington County Tax Assessor’s office.

John Richard “Ricky” Paul was married in 1979 to Dana Ruth Ray, daughter of Lynda Ruth Ray. They are the parents of two daughters: Brittany Leigh, b. 1981; and Lindsay Nicole, b. 1983. Brittany has two girls, and Lindsay has two children. Ricky was later married to Lucrezia, and they have a son, Jordan.

Rebecca “Becky” Busbee married Clinton Busbee II, and they live in Tennessee where she does med. records transcriptions, and Clinton is disabled. They are the parents of two daughters: Bailey Charlotte, and Brooke Savannah.

Clarence “Chip” Busbee Jr. attended David Lipscomb Univ. on a baseball scholarship, but later transferred to Harding Univ. After deciding on a major in occupational therapy, he transferred to Fla. Inter U. He and his ex-wife, Sheri-Jaye Hayward, made their home in Cape Coral, Fla., and have two children: Madisyn Claire and Blake Nolan, b. 2005. Sheri-Jaye is deceased, and Chip has his two children and mother in his home. He worked as an occupational therapist, until he became disabled.

Chesley’s youngest daughter, Johazel Thomasson, was only about four years of age when her father died. She then moved with her family to Panama City to live with her step-father. She met her future husband there as he was stationed at Tyndall Air Force Base. She was married in 1963 to Ronald Henry Ehnes, who grew up on a farm in Lakeville, Minn., as the oldest of six children. They began their marriage there, but later moved to different bases where Ronnie was stationed through the years and settled in Hampton, Va.

Ronnie was a quiet, humble fellow who cared for his family. He retired in 1985 from Langley Air Force Base in Hampton, Va., his last tour of service. Afterwards, he worked for 13 years as an industrial x-ray technician. He served as an elder for the Hampton Church of Christ for 11 years before his untimely death at age 59 in 2000 of a pulmonary embolism. Hazel continued to work as a mngt. assist. at Hdqrs. Air Combat Command in Hampton. She retired in 2015 and moved to Cabot, Ark., to live with her daughter, Susan and Tim.

Karen earned paralegal cert. from Ohio U. in 2005 and works with NASA John H. Glenn Research Ctr. She was married in 1983 to Philip Donald Ault, but divorced in 2004. They have two sons: Alexander Thomas, b. 1987, m. 2009 Karen Elizabeth Wilson; and Erik Wesley, b. 1991, single. Alex was graduated cum laude from Harding U. in 2011 with a degree in bus. admin. and major in mngt. info. sys. and later, a masters in info. tech. and theology. He currently works as an information tech. at St. Jude’s Children’s Hosp. in Memphis. He and his wife, who earned a B.S. in social work at Harding U. in 2010, have three children: Alex Thomas II, Cullen Ambrose and Lillian Rose. Erik, earned an assoc. degree in bus. admin. from Cleveland St. U. and works in Cleveland as a USPS mail carrier.

Susan Johazel was married in 1987 to Timothy Jay Hawkins who served 21 years in US Air Force as an explosive ordnance tech. He later worked related jobs and is currently serving as an elder and part-time office mngr. for the Cabot Church of Christ and does sales via eBay. In 2010, he graduated summa cum laude from Colorado Tech. U. with a major in bus. admin. He then earned a masters in operations mngt. in 2012 from the U. of Ark. Susan was a homemaker while children were young, but later worked as admin. asst. She is currently an admin asst. in Coll. of Educ., Leadership Office, Harding U. They have twin children: Kimberly Denise, b. 1991; and Patrick James, b. 1991, m. 2012 Amber Lynn Michaels, but divorced 2016. Kim earned a B.A from Harding U. in 2013 with major in English and minor in Bible and a masters in read. educ. in 2014. She currently teaches Eng. at Bald Knob, Ark. Pat earned a B.A. in youth and family ministry at Harding in 2013. He lives in Search, Ark., and works as a mkt. dir. for a roofing co.

Julie Ann was married in 1989 to Anthony Joseph Casella, a native of Bedford, Ma. The family lived in New Hampshire for 28 years with Anthony in the Air Force and Air National Guard until he retired as a Chief Master Sgt. in 2016. He had earned a B.S. in applied technology from Granite St. U. and an assoc. degree in aerospace operations from C. C. of the Air Force. Julie was always a homemaker. In 1917, the couple moved to Maryville, Tenn., to be near their sons: Mark Anthony, b. 1991; and James Anthony, b. 1996. Mark graduated from Harding in 2014 with a degree in youth and family ministry. He is currently youth and family minister for the NE Church of Christ in Kingsport, Tenn. He married in 2015 Elizabeth Ann Stewart who earned a degree in early childhood educ. from Harding in 2015. They are the parents of two sons: Emmett James and Henry Robert. James, single, earned a diploma in automotive tech. in 2016 from Universal Tech. Institute in Maine and currently works as an auto tech. in Knoxville, Tenn.

Wesley Thomasson family and the children made homes in…