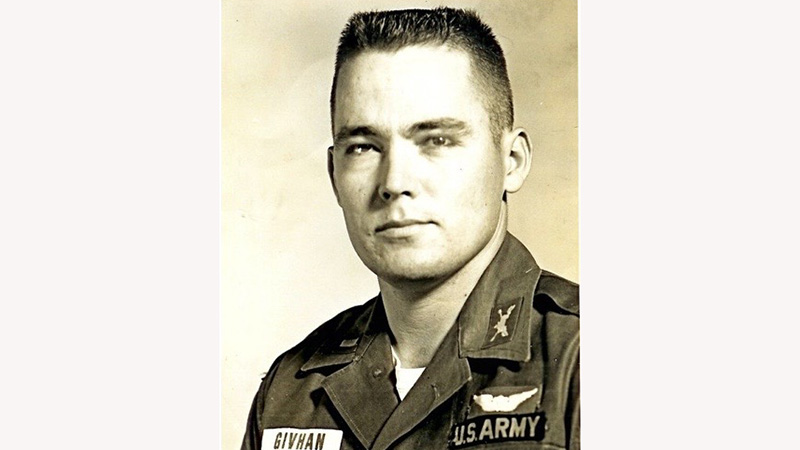 Author’s note: The Conclusion of Wesley E. Courson’s story will appear next week. This week’s column is dedicated to 1st. Lt. John B. Givhan, Vietnam Veteran and great American Patriot who passed away this week.

The Andalusia community, our state and the nation suffered a great loss this week with the passing of a great patriot, John Brandon Givhan.

John was best known for his continuing, tireless service to fellow veterans. He was also an attorney, rancher, author, radio talk-show host, father, husband and grandfather, combat-wounded veteran of the Vietnam War and beloved citizen of the City of Andalusia, Alabama. More than that, he was a good Christian man. 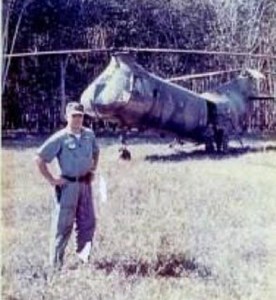 1st Lt. John B. Givhan with his H-21c “Shawnee” helicopter in Vietnam.

This author first met John Givhan 63 years ago when we were incoming freshmen at Alabama Polytechnic Institute [soon to become Auburn University in 1960]. We were next-door neighbors on South College Street for four years. Both of us were ROTC students, he in the Army and the author in the Navy. After graduation in 1962, we joined our respective services. John Givhan became a helicopter pilot and deployed to Vietnam. We lost touch for a couple of years but I heard that John had been wounded in 1964.

The details of John’s service and the near-death fight to save his life can be found in a book he published in 2000, “Rice and Cotton: South Vietnam and South Alabama.” The book is a great read and is a testament to John’s gratitude to those who were responsible for saving his life. John also published another book in 2017 with Judy Cooper entitled, “Blooms of Old Cahaba.”

After being medically retired from the Army, John served on the staff of Congressman Glenn Andrews from 1965-66. In 1966, John met the love of his life, Martha Elizabeth James and they were married in December of that year. They moved to Montgomery in 1967 where John was a residence service manager for South Central Bell until 1970. John entered the Cumberland School of Law at Samford University in 1970 and received his Doctor of Jurisprudence in 1972.

It was Andalusia’s good fortune that John Givhan was asked by attorney Harold Albritton to join the Albrittons and Rankin law firm in 1972. He was made a partner in 1976 and the firm became Albrittons and Givhan. John remained a partner until his retirement in 1996.

John Givhan served his community and veterans in many ways. From 2008-12, he broadcast a daily program on local radio station WAAO called “The Patriot’s View.”

Many hundreds of deployed military men and women from Alabama received “care” packages generated by Givhan’s “Adopt a Deployed Family” newsletter that went out to more than a thousand recipients. He started the newsletter in 2006 and it continued for many years. When our local National Guard was deployed, he established an account at a local shipping office to help pay the shipping costs to encourage people to send packages to our troops. That continued long after our troops came home. Through the newsletter, John was able to seek help for many area veterans in need – everything from medical bills, utility bills, house payments – if John Givhan learned of a veteran’s need, he tried to help.

In 2011, John received the “James Award,” from the Methodist Men’s group at First United Methodist Church in Andalusia. This prestigious award is given nationally to those who are “doers of the word and not merely a hearer” [James 1:22].

John Givhan received the Distinguished Service Award from the Covington Veterans Foundation in 2019. He was also made an honorary member of that organization in 2021. 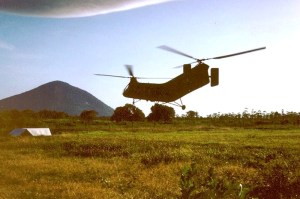 In 2012, John was the first person to join the Volunteer Veterans program for the local Comfort Care Hospice office. In addition to several veteran’s pinnings, John provided statewide education in-service training for PTSD for Comfort Care workers and chaplains. Through Comfort Care, John helped establish the “South Alabama Veteran’s Outreach Support Group,” which is a support group for active military, veterans and their families and the interested general public. Local Comfort Care manager Vickie C. Wacaster said this about John’s service, “I cannot begin to tell you all the lives Mr. Givhan touched by participation and leadership in our Veteran’s Support Group. John made calls and wrote letters for our veterans and helped them navigate the VA medical system. He helped find housing and jobs for our recently discharged Afghanistan veterans….He was there for them – he was there for all of us.”

Andalusia Mayor Earl V. Johnson first met John Givhan when they were both students at the Cumberland School of Law at Samford University. “It was clear to me at the time that John was a leader and had probably always been a leader…he was two years ahead of me in law school  but he took time to help me with any questions I had…Eventually, he and Martha and Sylvia and I became very close friends. We were happy when we learned that he and Martha would be coming to Andalusia where John would practice law with the Albritton firm…. John was a kind and gentle person who rarely talked about the terrible injury he suffered in Vietnam…When we returned to Andalusia, Sylvia and I picked up with John and Martha right where we had left off…John became a leader in the community, particularly with respect to the support of veterans and active-duty members of the military services…John was a leader in the civic life in Andalusia and in the Covington County Bar association. His service to our nation has been exemplary and he will be missed in our community.”

Circuit Judge Benjamin Bowden had this to say about John Givhan, “I first worked with John at the firm before joining the Air Force. He was an inspiration to me as a lawyer and military officer….John was one of the main reasons I wanted to come back to Andalusia after I left active-duty. I wanted to work with him and learn from him. He was a real hero in my mind.”

The author believes that the near-death experience suffered in Vietnam was a driving force in his life, spurred on by his gratitude to those who helped him survive. He and his brothers returning from Vietnam were never welcomed home as befitted American fighting men who had “simply answered their country’s call.” John Givhan sought to remedy that by becoming a fierce warrior-advocate for veterans.

John returned from Vietnam, missing a leg but determined to live out a life of service to others. He had flown more than 250 combat missions in Vietnam and was awarded the Bronze Star, Purple Heart, Armed Forces Expeditionary Medal, Army Aviator Badge and the Air Medal with nine Oak Leaf Clusters. Alabama Governor George C. Wallace recognized John in 1965 for his extraordinary service to the state of Alabama and the nation.

John Givhan made it his purpose in life to help other veterans and to make them feel appreciated. Sometimes it seemed as though he carried the burden of the “whole Vietnam experience” upon his shoulders. Even so, he was not bitter but determined to help others. This tough man with a caring spirit carried the scar of Vietnam with him. Those deep feelings were illustrated in this recollection from Harold Albritton, former law partner with John Givhan and currently Federal District Judge of the Middle District of Alabama on Senior Status [with reduced workload], “I remember the day the U.S. pulled out of Vietnam. The television was full of shots of helicopters flying off the roof of our embassy taking Americans out as the North Vietnamese stormed in. I heard John crying his heart out in his office.”