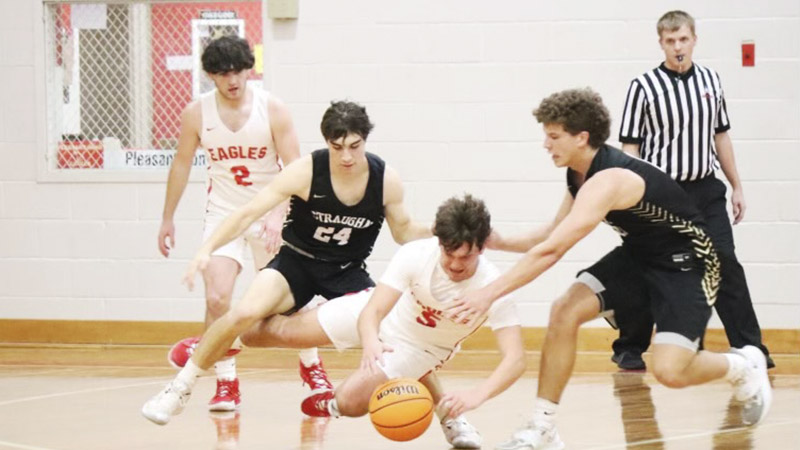 Pleasant Home's Nick Short fights for control of the ball with Straughn's Riley Brooks and Micah Turner as Mason Anderson watches the play for PHS. (PHOTO BY TINA BOLES)

Pleasant Home hosted Straughn for a pair of basketball contests to open the month of December, and both teams came away with victories.

Straughn led 14-7 at the end of the opening eight minutes. Pleasant Home cooled its county rival off slightly in the second but trailed 21-12 at halftime. PHS outscored SHS by four in the third and crept within 26-21 after three quarters. Neither side mustered much offense in the fourth as both squads combined for only 10 points. Micah Turner led the Tigers with nine points. Riley Brooks followed with eight, and Dev Patel chipped in four. Mason Anderson paced the Eagles with 16 points as Ethan Curry earned four, and Nick Short had three.

“PHS is an excellent-coached team. Coach (Fred) Kelley has done an amazing job with his program and it showed. Both teams played extremely aggressively, which will only help us down the road. We got into a slump in the third quarter but were able to rely on our defense to come and bail out our offense. We found a way to win on the road and are looking forward to this upcoming week with five games in six days. This will allow us to see areas we need to work on to be ready by January, which I know these young men are up for the task,” SHS Head Coach Trevor Driver said.

Both schools are back in action Monday, Dec. 6. Straughn will christen its new home court against Georgiana, while Pleasant Home will host Red Level in another county showdown.