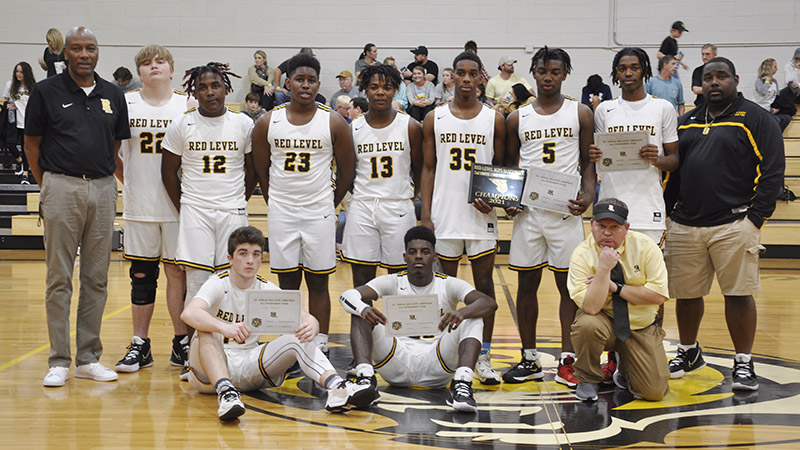 Four county boys’ basketball teams were in action to close out the 2021 calendar year at the 23rd Annual Red Level Christmas Tournament on Thursday, Dec. 30.

The girls’ bracket was cancelled due to not fielding enough teams for the competition.

Red Level downed Straughn 40-32 in the championship game of the tournament.

The Straughn Tigers finished as the runner-up of Red Level’s Christmas Tournament after falling to the host Red Level Tigers in the championship game, 40-32.

Caleb Padgett and Poindexter each put up five points in the third as Red Level scored 11. Turner continued to pace Straughn with five of the seven points. RLS upped its lead to 27-19 with eight minutes to go. Both sides were even with 13 points in the final period. Abram Guilford and Turner had five apiece in the fourth as Riley Brooks added a three for SHS. Poindexter went seven-of-eight at the free-throw line to seal the win and earn Tournament MVP honors.

Red Level was led by Poindexter with 22 points, and Johnson, who was named Co-MVP, finished the game with seven. Padgett earned five and was followed by Malikye Wright who added four. Turner paced Straughn with 18 points, and Guilford chipped in eight.

Red Level moved to 12-4 on the season with the win and a 70-58 tournament-opening triumph over Flomaton.

“We had a very successful tournament. All of the teams matched up and were very competitive as each game was well-played. Fans also came out in large numbers to support their favorite teams. I would especially like to congratulate our young men for winning the tournament, our fan base for their participation, parents and others for working the gates and concession stands, and our administrators, faculty, and staff for their support as well. Go Tigers,” RLS Head Coach Bridges Anderson said.

“I am so proud of my boys. They beat two very talented teams in Opp and T.R. Miller to make it to the championship game. Both of those teams wound up winning their other games. These young men are checking off short-term goals every time we play. Area play is right around the corner, and now it’s time to put all the pieces together, which I am confident we will do. Hats off to Coach Anderson. He is a phenomenal coach and has done an amazing job since he started at Red Level,” SHS Head Coach Trevor Driver said.

Opp edged Andalusia 52-49 in a hard-fought battle that came down to the wire and took fifth place. 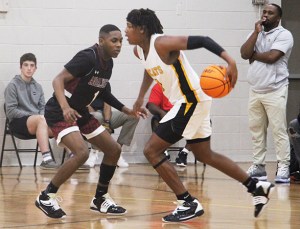 Opp’s A.J. Coleman tries to move the ball closer to the net against Andalusia’s Nashaun Wilson at the Red Level Christmas Tournament.

The Bobcats held an eight-point lead before the Bulldogs closed within three and trailed only 12-9 after the opening period. Nashaun Wilson had five points for Andalusia in the first. Zack Hill and Terry Davis each had three points as all five starters scored for Opp. Brendan Davison garnered a pair of three-pointers and led all scorers with eight points for AHS in the second. Cadariyus Love also hit a three as the defense held OHS to only eight points. A.J. Coleman had four for Opp as Andalusia took a slim 22-20 lead into the break.

The action went back and forth in the final period as the two teams traded the lead on numerous occasions. Opp rallied back with 18 points and picked up its third straight win over Andalusia who finished with 12 points in the final stanza. The Bobcats led by three and fouled on a long three as the final buzzer sounded. The Bulldogs were unable to force overtime after all three free throws came up short. 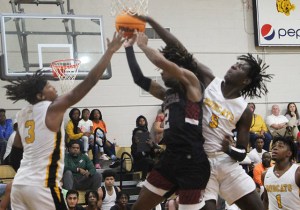 Brendan Davison, center, powers his way to the hoop as A.J. Coleman, left, and JaKanye Mount, right, apply defensive pressure during the play.

Coleman led Opp with a season-high 18 points and three assists while Hill finished with 15 points, four steals, and two assists for the Bobcats. Love had 12 points on four three-pointers to pace Andalusia, and Davison also took home double digits with 10 points for the Bulldogs.

Opp improved its record to 8-4 after winning two of three. The Bobcats came up short to Straughn 58-53 but rebounded for a 45-44 win over Monroe County. Andalusia dropped to 6-9 overall with the loss and a 68-49 setback to Flomaton in day one action.

“Props to Red Level High School for putting on a good competitive tournament. We really enjoyed the experience and opportunity to compete against some of our surrounding teams. The outcome wasn’t what we would like, but it was a step in the right direction. We have been focusing on building the culture to where we want it to be. After a few changes and adjustments, I think it’s starting to click to the guys. The second half of the season will be really exciting to watch them grow,” AHS Head Coach Marcus Mickles said.

T.R. Miller took third place at the tournament with a 50-40 win over Flomaton.

All four teams are back in action this week. Opp and Red Level both begin the area schedule with Thursday, Jan. 6 trips to New Brockton and McKenzie, respectively. Straughn begins the second half of the season Thursday at home against Brantley as Andalusia visits Opp on Friday, Jan. 7.