Tigers to face new challenges in return to 3A

(Editor’s Note: This is the third of a six-part feature series highlighting the 2022 football schedules for the schools of Covington County.)

With a move back into familiar territory, Straughn wants to continue its recent success as the program aims for another winning campaign in the 2022 football season.

The Tigers drop back to Class 3A after spending the last two years in Class 4A and find themselves placed in a nine-team Region 2. Ashley Kilcrease returns for his seventh year as a head coach and his second season with Straughn. Kilcrease led Brantley for five seasons from 2013 to 2017 and returned to coaching in 2021. 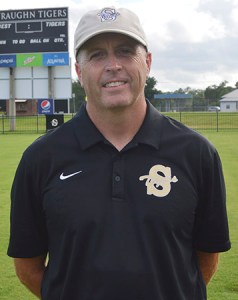 “We feel like the schedule will be a challenge for us. Having nine teams in the region, we will have to be ready to play each week,” he said.

SHS will welcome Red Level for a preseason jamboree Friday, Aug. 19. The regular season gets underway the following week with the region opener against Pike County. Following a region contest with Daleville at home to open September, Straughn hits the road for the first time at Clarke County in a non-region battle. The Tigers return home to face region foe Ashford and Ariton in the second non-region game on Friday, Sept. 23. The month concludes with a trip to Houston Academy in the first of three visits to the city of Dothan.

The region schedule combined with two quality opponents in non-region play will present a challenge for the Tigers. “Week 3 is an odd off week, so we had to just find someone who was off. We found the defending 2A state champions in Clarke County. Ariton’s coach is a distant cousin of mine, and we decided to play them in Week 5. They have a great program and will come to us for the first time in several years.”

Straughn gets the month of October underway with New Brockton in the last home region game. The Tigers then make their second trip to Dothan with first-time opponent Northside Methodist and travel to county rival Opp the following week. SHS closes out the regular season Friday, Oct. 28 against Providence Christian on the road. 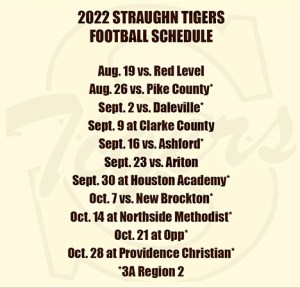 “I am blessed to get to serve these young men as their coach. Coaching is a calling and an opportunity to serve others and enjoy every minute of it. The first year for us at Straughn was great, and we believe the best is yet to come,” Kilcrease said.

Straughn finished the 2021 season with a 7-4 overall record.