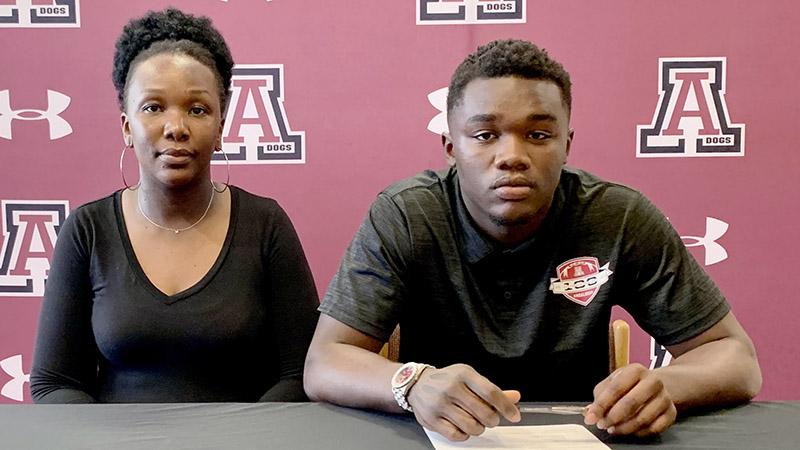 With a vision for his next journey in mind, Andalusia High School senior Mike Hourel Jr. aims to return Highland Community College to glory after committing to HCC Thursday.

“Having the opportunity to continue playing football means another dream of mine will be coming true. It will allow me to pursue my athletic career and show these coaches what I can do. I’m excited about meeting the players and getting to know them more. I can’t tell you how many people I’ve gotten close within the football locker room, but they go from strangers to brothers in a short amount of time. It’s fun getting to know them and finding out chemistry with each other,” Hourel said. 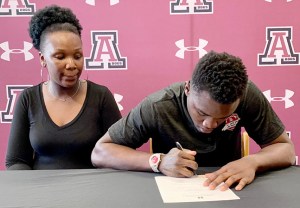 Nikki Robertson looks on as her son Mike Hourel Jr. signs his NLI to play football at Highland Community College in Kansas.

Located in Highland, Kansas, HCC is a member of the National Junior College Athletic Association’s Kansas Jayhawk Community College Conference. Hourel was not deterred by the Scotties’ 3-13 overall record since the beginning of the 2020 season.

“They weren’t very good the last couple of years. Being a good athlete I am, I want to go up there and change the program around and make history. It really means a lot to have this opportunity to play again in college. I prayed something would come in, and it did,” he said.

Hourel, who played both offense and defense for the Bulldogs in 2021, signed as a linebacker. He recorded 153 tackles, four sacks, and 10.5 tackles for loss. He is excited for the next step but will miss his time at Andalusia. 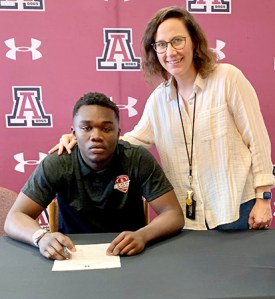 Hourel was grateful to have the support of one of his favorite Andalusia High School teachers, Holley Bass Wingard.

“I will most definitely miss the locker room time. That’s where you get closer and closer with your brothers. The coaching staff also taught me a lot of life lessons I will carry into my future. When we played Pike Road during the regular season, I was everywhere every snap and had 18 tackles, which was my biggest highlight.”

He first began playing football when he was four years old. “I loved it all the way until my seventh-grade year and stopped liking it for a while. I ended up finding my love for it again, and when this season ended for us, it was my last time playing in high school. It meant a lot my family supported me the way they do. I love all of them,” Hourel said.

“I’m really proud for Mike, who is a really good player. He played running back and inside linebacker for us at the beginning of the year due to injuries we had. That’s probably what drew the interest of Highland, who saw his versatility. I projected him to be an outside linebacker but think the school really likes him on the inside. They are in a very strong league with groups of community colleges in the Kansas and Illinois area known for sending kids on to the next level. Mike has continued to work even after football season and is always up here at night working out. We’re excited for him to have a great opportunity, and I believe he will take full advantage of it,” AHS Head Football Coach Trent Taylor said. 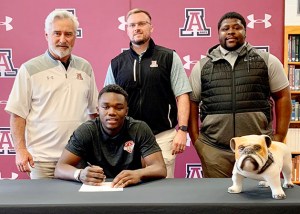 Hourel named his brother Jamal as his biggest inspiration growing up.

“Even though we played on two different sides of the ball, he helped me get the way I am today. We used to work out in the yard together, and he received a lot of offers, which had me thinking I could, too.”

When asked if he would have to make adjustments being so far from home, Hourel did not feel there would be many. “I’m ready to see what Kansas is like. It looks like it snows a lot there. That’s one thing I’ll see more, but I won’t get homesick or anything,” he said. 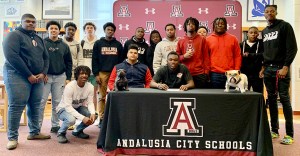 He is the son of Mike Hourel Sr. and Nikki Robertson and grandson of Sylvester Robertson. His siblings are Jamal Hourel, Destini Hourel, and Xavier Hourel. He will graduate from Andalusia High School on Friday, May 20, 2022.

“He is a sideline-to-sideline player whose highlights were passed on to us. The first play we saw was a 95-yard touchdown as a running back. That answered the question of whether or not he could run. We look forward to seeing what he can do and feel like what we do schematically will benefit both him and his skill set. We’ll be playing a lot of freshmen and will use him as an inside linebacker. He texts me every day and is ready to get started up here. I’ve heard nothing but good things about his character, and the film speaks for itself,” said HCC Assistant Head Coach DJ Mayo.