Andalusia’s season closes in second round to UMS 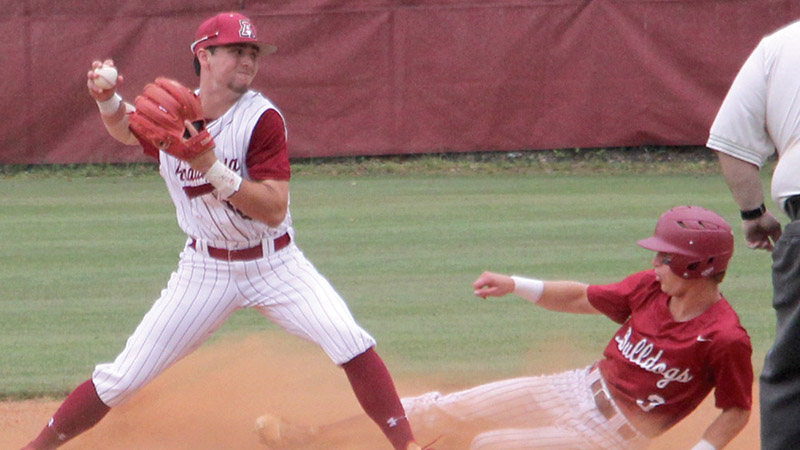 Conner Brooks gets the out at second and looks to first for a double play against UMS Wright on Friday. (PHOTO BY ROBERT BLANKENSHIP)

The Andalusia High School baseball season came to an end Friday in the second round of the playoffs as they dropped consecutive games to UMS Wright.

The first game was a pitchers’ duel through five innings until UMS Wright secured a run in the sixth and three more in the seventh. The Bulldogs had an opportunity in the final inning of game two to force a third game with both the tying and winning runners on base. But consecutive outs ended the comeback effort.

Game 1: Andalusia 0, UMS Wright 4
Aksh Patel pitched 6.1 innings for the Bulldogs, giving up no runs through five innings and striking out nine batters. After surrendering a run in the sixth and another in the seventh, Conner Brooks finished the game in relief, giving up two runs on three hits and a walk. Joseph Turner hit a double for the Bulldogs.

UMS held Andalusia scoreless and gave up only three hits and two walks in the first game.

Game2: Andalusia 5, UMS Wright 6
Andalusia’s bats came to life in the second game, but it was not enough as they fell by one run, 6-5.

Andalusia took an early lead in the top of the first when Parker Adams hit a two-out double and then was driven in on a single by Turner.

UMS tied the game on a sacrifice fly in the bottom of the third. In the fourth, they took a 3-1 lead on an error and double.

Parker Adams cut the lead to 3-2 in the top of the fifth when he doubled, driving in Ayden Amis.

In the bottom of the fifth, UMS took advantage of a walk and wild pitch to put up three runs to take a 6-2 lead over the Bulldogs.

Andalusia got two runs back in the top of the sixth. Conner Dalton hit an RBI single to score Tucker Glenn and Jack Lathrop would later score on a wild pitch, making the score 6-4 going into the final inning.

In their final opportunity, Andalusia came close to forcing a third game. Garrett Blackston’s single scored Parker Adams to cut the lead to only one run, 6-5. But, two strikeouts ended the game with runners on first and third.

Andalusia ends the season with an overall record of 14-14.