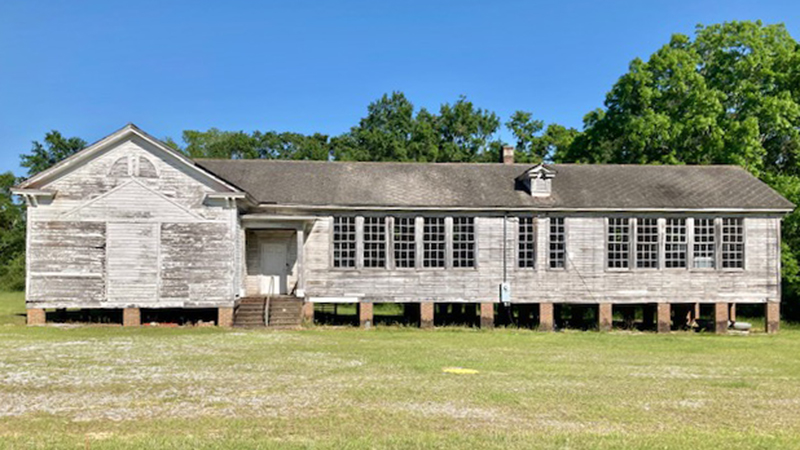 South of Andalusia just a few miles is an historical structure that is truly a treasure of Covington County. Efforts have been underway from time to time to preserve the building which is a former country schoolhouse from the “school marm” days.

It has been said that the building is about or over 100 years old. In researching the old newspapers, I have found articles about Stanley School going back to 1911. Others in the community whose family members have attended the school say the first building was constructed in the late 1800s and was located about a half mile from the current building. Many citizens in Covington County and the Red Oak/Stanley area are eager for the school structure to be preserved and used for community events for years to come.

Some former students have mentioned that it might have been a one-room school house and that there was definitely a fire at one time. Prior to that a windstorm blew the building off the wooden blocks. Next the school was built on a different site on land given by Enoc Josey, but the Stanley School name was retained since John Stanley donated land for the original building along with timber for the lumber.

It is remembered that in 1937, the current school house was erected across from the Judson Baptist Church and was used as a school until it closed in 1958 at which time students were transported to W. S. Harlan in Lockhart. Passersby have admired the school building as it serves as a reminder of days gone by.

August 24, 1911 – “There will be an all-day singing at Stanley school house Sunday, August 27. Everybody is invited to attend.”

March 20, 1913 – “AGED COUPLE MARRIED – At Stanley school house last Thursday, Tom Bryant, aged 77, was married to Mrs. Eliza A. Williams, aged 56. Rev. Raley performed the ceremony. A large crowd of friends were present to extend good wishes and congratulations to the newly-married pair. It is said that the couple had never met until last Thursday, and it was a case of ‘love at first sight.’”

Does anyone know if there are any descendants? Just wondering!

Another singing appeared in the May 1914 edition. There must have been more than just singing going on – maybe some courting, too.

Several alums of the Stanley School have told me that in the old days, the boys went to school after harvest and in the winter months only since when springtime came, they had to help with the farm work.

In last week’s column it was mentioned that Mr. Carroll sold wood or lighterd to the school. Others remembered that Cliff Maddox sold milk to the school. Glen Powell remembered some of the boys slipping around and smoking “rabbit tobacco” probably behind the bushes in the 2nd grade. Harold Elmore or Glen, can’t remember which one, said that some teacher or teachers boarded with the Thompsons near the Shiloh Cemetery. The teachers walked to school like some students who lived nearby.

In 1915, the Stanley School Honor Rolls appeared in The Andalusia Star. “The above named have made a general average of 90 percent and have not been absent more than five days.”

The last names of these students are of families who still live in the area such as Hildreth, Suggs, Windham, Nixon, Sellers, Josey, Atkins, Ramer, Stanley, and Turman.

April 21, 1922 – “There will be an educational rally held at the school on the fourth of July together with a barbecue. It is expected that all county (political) candidates together with Senator Prestwood will be there to address the people on education if they feel inclined to do so. The ladies around Stanley certainly know how to prepare and spread a dinner.”

January 30, 1923 – “Eighty-One Pupils And Patrons Take Hookworm Cure – One of the best examples of community spirit in Covington County is the Stanley School Community. Credit belongs to all members of the community but especially to the principal of the school, W. R. Walker. A splendid example of this spirit was shown last Friday morning, Jan. 26. The whole school had been examined by the County Health Nurse, Miss Morrison. Every child in the school with one exception had been found to have hookworms to a greater or less extent, some severely and some in a mild degree.”

“All the children came to school at 7 o’clock that morning without breakfast. The entire school was given hookworm treatment by the County Health Officer from the oldest boys and girls studying Algebra down to the six year old tots in the First Grade. Eighteen patrons of the school came to the ‘hookworm party’ and some of them also took treatment. In all eighty-one persons were treated or practically every child in the entire school.”

“The school has installed splendid sanitary toilets and a bubbling fountain so that the Stanley School stands first in sanitation and good health among our rural schools in Covington County. Professor Walker is certainly to be congratulated for this splendid result as progress of this community is improving the comfort and prosperity of the homes and the health and welfare of the children.”

Hookworms was such a problem in the county that in 1924, the World Health Organization in New York sent a doctor to study this situation. Letters that Dr. Wilbur Sawyer wrote home to his wife from Andalusia are posted on the internet. He and the health officer visited many homes and schools in the county and made observations of people suffering with malaria and tuberculosis as well as hookworms in an effort to report to the W.H.O. and to educate people about prevention and treatment. These were all common health maladies back in the 1920s.

October 5, 1923 – “Stanley School has just completed an additional classroom with state aid. There are three teachers there instead of two like last year.”

November 30, 1923 – “Thanksgiving Day at Stanley School was made a very enjoyable occasion despite the unfavorable weather. A large number of students and patrons assembled in the auditorium at 10:30 a. m. Mr. W. R. Walker, the faithful and highly esteemed principal, opened the meeting in a brief address of welcome. Devotional services were led by a lifelong friend of the principal, Mr. Davis of New Market, Ala. who made a stirring appeal to and prayed for the young people that they might get a vision of life which would make them useful citizens.”

“Following Mr. Davis, Teacher Miss Myrtle Wells led the primary grades to the stage and drew from the little folks some lessons which they had learned. Miss Wells had charge of the older pupils who recited a lesson in dental hygiene.”

“After these exercises, Dr. Lynn Walker, pastor of the Presbyterian Church, was introduced and preached an impressive sermon, “Give Thanks Always.” The audience listened attentively and many expressions of appreciation were heard. Afterwards a bountiful dinner was served and every guest was made to feel the warmth which filled the hearts of the citizens of this community.”

“There have been few communities which have shown the marked progress along educational lines and community spirit that has been displayed by the people of Stanley Community.”

In the years following from 1925 to 1944, other events were publicized in The Andalusia Star about box suppers to purchase shades for the school, plays staged at the school, Halloween parties, pie and cake sales for the school fund, all-day singings, and even a forest ranger talk to students stressing the need for fire prevention in the nearby forests and wooded lots. Stanley School was always mentioned as participating in the annual Covington County Fair, often times winning prizes in the exhibits.

As you readers may have read about the Stanley Schoolhouse Committee to oversee preserving the school building in the recent Hometown Heroes magazine inserted in the local newspaper, let me encourage you Covington County citizens to make a donation to help save this significant piece of history. You may contact Jimmy Grissett, Brad Bowman, Joshua Sightler, and David Elmore or visit gofund.me.com/f/Stanley-community-school-house-repairs.

If any errors were made of names mentioned in the previous column, I was quoting from a person who gave me information retrieved from her storehouse of precious memories of way over 50 years ago. Bless her heart! I am pleased to know how many people have connections with relatives and friends who attended Stanley School. Not only do we all Remember When this school was filled with children learning and playing but also becoming the citizens that helped to make Covington County what it is today.