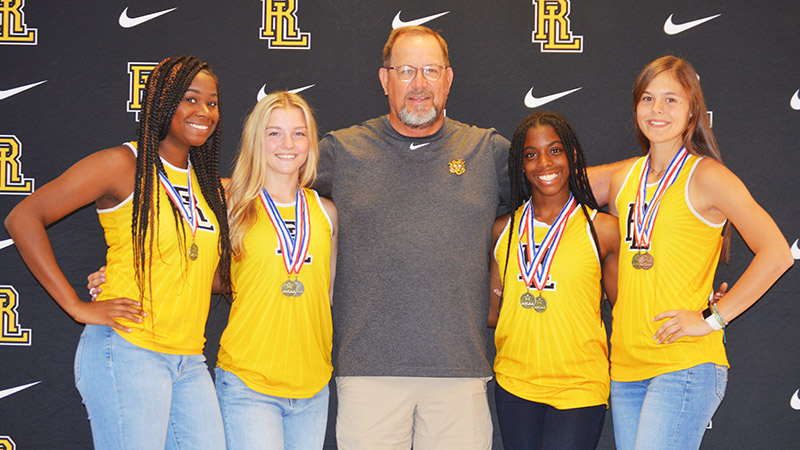 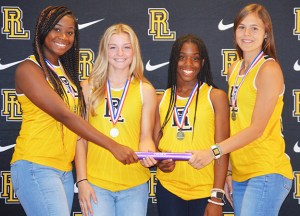 The girls’ team finished third in the state, while the boys finished 10th overall.

“I am proud of this whole team and not just the championships,” said Head Track Coach Tony Ingram. “That’s what you work for, but there are so many victories not seen with kids working their way into placing in the top 10 of the state. Personal records get lost in the championship, but to me, it’s just as important to see a kid advance. There are many people to thank with my assistant coaches Steve Bailey, Joel Phillips, Tyler Ingram, Brody Ingram, and Dawn Kelley. Our parents support us, and my team mom Lindsay Hood makes all our reservations and sets up our team meals. She gets everything ready for track meets and is probably the most unsung hero in the whole deal. I could not do what I do without all those people, especially Lindsay.”

The state champion 4×100 meter relay team consists of Miracle Wright, Mariah Crowell, Ruby Carroll, and Caylee Douglas. “This year flew by really fast. The team wanted it just as much as we did. We all put in the hard work to succeed at the events we competed in and made it happen,” Crowell said. 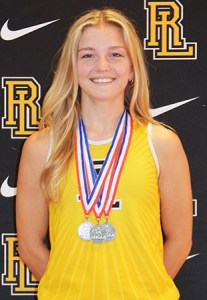 Douglas was named the state champion in the 300-meter hurdles and runner-up in the 100-meter dash. “Winning a state championship not only with my teammates but also as an individual is honestly hard to put into words. Coming back from an injury last year and still having ankle issues this year, I’ve had to push myself even harder to overcome these difficulties. At the beginning of track season, if you had asked me if I would win one, not two state titles, I would have said, ‘You’re crazy.’ Being able to represent Red Level in this way means so much to me. Not many people are able to leave high school as a state champion, but I’m very grateful I can say I did it with my teammates and my coaches,” Douglas said.

Carroll claimed the state crown in the 100-meter hurdles and notched third place in the 300-meter hurdles. “It means a lot to finish out my high school career with a state title. All of the hard work and dedication I put in really paid off. It’s very rewarding to the coaches knowing their time and effort was not wasted,” Carroll said. 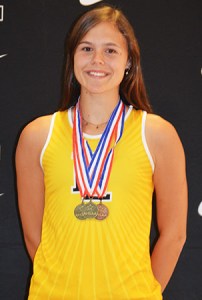 Wright won the state title in the 100-meter dash and was runner-up in the 200-meter dash. “I want to give a shout-out to Coach Ingram. He put in countless hours and hard work most people do not notice. We wouldn’t have it made as far as we did if it wasn’t for him,” Wright said. 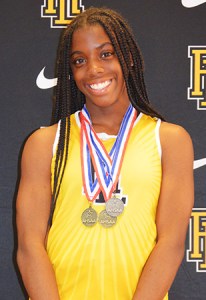 RLS took five girls to the state track meet and finished third out of 38 or 40 1A schools. Chasey Sanders earned seventh place in the discus throw and 12th place in shot put.

“It was quite an accomplishment, and I’m very proud to be a small part of it. My wife Ladonice keeps me focused and organized in all the chaos. Our principals, superintendent, and board members have provided us a place to have meets and practices. Our guys finished 10th, and that is amazing to me. We’re a pretty big track team for Covington County, and I want to give a huge shout out to Mr. Driver and the board members for having us a place to prepare for events,” Ingram added. “Our kids deserve a place to compete, which has probably led to these championships more than anything.”