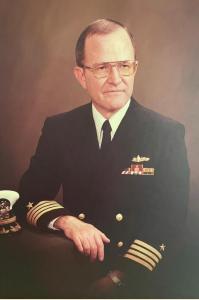 Jim was the loving husband of Jean Tadlock, his wife of 32 years.

Born January 18, 1938 in Andalusia, Jim was the son of the late Joseph and Mollie Tadlock. He received his commission as an Ensign in the U.S. Navy the day he graduated from Auburn University and married his high school sweetheart, Grovernell Little. During his time in the Navy he earned a Master’s Degree in Mechanical Engineering and he was an avid fisherman and woodworker. Jim’s ship has sailed to another horizon.

As a Navy man he loved the ocean and the fact that he could sail into one man’s sunset as it became another man’s sun rise. He set his course for another horizon as he entered into Heaven’s port. He served his country boldly for more than 30 years but served his family lovingly for a lifetime. He was my dad, my wise word, my rock, my friend and the Captain of my ship.

Capt. Tadlock was preceded in death by his first wife, Grovernell Tadlock, in February 1989, as well as his brother, Bill Tadlock, and his step-granddaughter, Amber Escabi.

In addition to his loving wife, Jean, he is survived by his son, Grover Tadlock and wife Sheri; grandchildren, Nathan and Rey Tadlock; stepchildren, whom he considered as his own, Regina Liechti and husband Tom, Alan Bean and wife Sheri, and Marcia Dermatas and husband John; step-grandchildren, Melissa and Scott Liechti, Steven, Kelsey and Gretchen Dermatas, and Hollie Bean; a step-great-grandson, Josiah Escabi; and several nieces, nephews, cousins, friends and other relatives.

A private memorial service will be held at a later date. In lieu of flowers, donations in Capt. Tadlock’s memory may be made to the American Cancer Society (www.cancer.org).