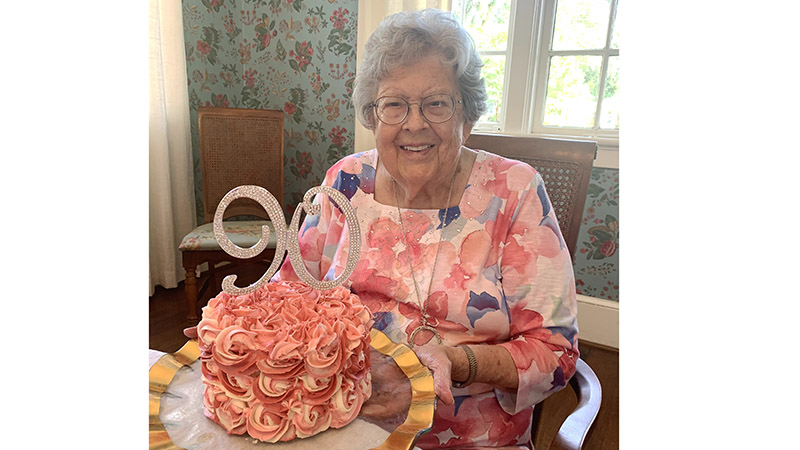 Janice Castleberry celebrated her 90th birthday Wednesday, June 22, with members of her family and gave credit to God for helping her reach this milestone in her life. (SUBMITTED PHOTO)

Janice Castleberry lives for the Lord every day as someone who enjoys helping others, and Wednesday, June 22, was no different as she celebrates reaching the age of 90.

“I feel fine to reach 90. I can’t do what I used to do and want to do, but I’m still moving around. I’ve had a good long life, and God has blessed me to have many people in my life with family and a multitude of friends. I’ve always been a people person and love to help people. It’s always been my desire to help somebody along the way,” Castleberry said.

She stated that her secret to turning 90 years old is putting her trust in God. “I have always turned to Him to give me help with what I’ve done in my life. I want to thank Him and my friends who have been so helpful. He is there every day all the way.”

Born in 1932, Castleberry grew up in Loango and graduated from Red Level High School in 1950.

“Loango is a little community about five miles below Red Level and was very active at that time. We had two stores, a school, and two churches. Now, it’s like all of the other little communities and has dissipated. Our school was consolidated with Red Level School in the 1950s. We left Loango School and went to Red Level School when I was in the seventh grade,” she said.

Castleberry felt trusting God and obeying your parents are two important life lessons, which have remained with her throughout 90 years on Earth.

“You need to be active in church, your community, school, and be a volunteer. That’s my cup of tea, and I love volunteering. I volunteered with the Red Cross, and we started the People Against a Littered State (PALS) program. I’ve been with that for all these years and finally had to give chairmanship over to Frank Shaffer. I’m still in touch. When I see litter on the streets, I want to pick it up, but they won’t let me do that.”

Castleberry, a resident of Andalusia, has witnessed many changes in today’s world since she was a little girl.

“We don’t have as much respect for our country as we were raised to have. I’m a very patriotic person, and it bothers me to see people who do not respect the flag and military. When Johnny was in the military four years, I was with him. We were in England for three years. When you get out of our country, it really makes you appreciate your country,” she said.

She was married to Johnny Castleberry for 61 years before he passed away in 2013.

“It was a wonderful occasion to celebrate my 90th birthday. I called it a family reunion instead of a birthday party. I have too many friends and couldn’t invite the whole county since I have friends from every area. By being involved in school and with Johnny doing politics, I have friends all over this county that I wanted to invite. I told them we couldn’t do that, and it was just a little family reunion, which was good,” Castleberry said.

Castleberry was a secretary at Red Level for 30 years prior to her retirement.

“When I worked in the school office, I saw many kids go through the school and loved them all. They could call on me, and if I couldn’t do what they needed, I could find somebody who did.”

Cantrell excited to lead Florala Wildcats into next football…