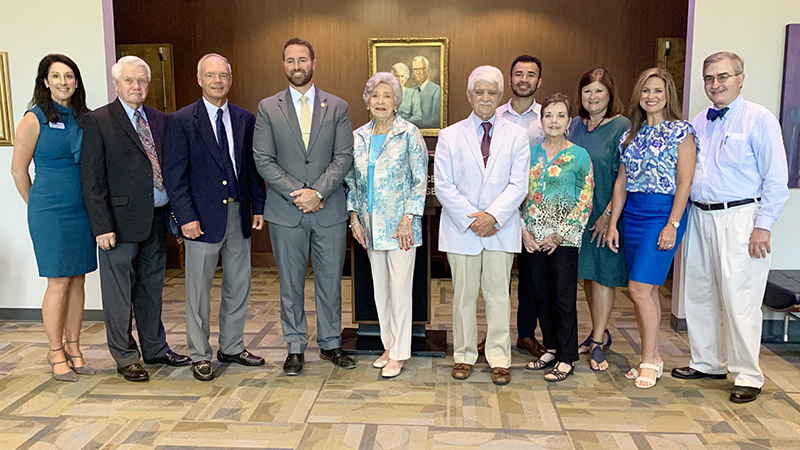 LBW Community College held a special celebration to recognize the 40th anniversary of the Martha and Solon Dixon Center for the Performing Arts on Friday, June 24.

Members of the LBWCC Foundation gathered for a special ceremony in the front lobby to recognize the Dixon Foundation for their contributions to the theater in its 40-year history. The Martha and Solon Dixon Center for the Performing Arts first opened on May 20, 1982.

“As a proud alumnus and president of LBW, I can attest that the ground on which we stand today is stronger than ever. It’s because of the Dixon Foundation, which the Martha and Solon Dixon Performing Arts Center has remained a world class facility standing the test of time and becoming a true superstructure,” said LBW President Dr. Brock Kelley. “Since 1978, the Dixon Foundation has graciously supported LBW growth with several million dollars in gifts.”

The Performing Arts Center originally was made possible by a gift of more than $500,000 by Solon and Martha Dixon and a $550,000 grant from the Alabama Building Commission. At the time, it was the largest individual gift ever given to a two-year college in Alabama.

“Because of this donation, many have benefited from the Martha and Solon Dixon Performing Arts Center. Many have been able to find their passion on this stage. The talent that has graced the stage the past 40 years would not have been possible had it not been for the vision and passion of Solon and Martha Dixon. LBW is forever grateful for the generosity and forward thinking of the Dixon Foundation. As long as I am the President here, LBW will continue to honor the legacy the Dixons have left. It’s truly a world-class facility.”

“I was able to play baseball out here, but my first recollection at LBW was the arts, and my favorite class at LBW was on that stage. If it wasn’t for you guys, we wouldn’t have that, and neither would the future. Thank you from all of us,” Kelley added.

Many citizens in the area have welcomed several recent improvements with lighting at the theater thanks to Martha and Solon Dixon Center for the Performing Arts Technical Manager Jerry Wishum.

“The contributions made last year really made a difference at our Family and Friends Night. I had so many compliments on the light shows we were able to display. It’s continuing to be a steady art facility,” Kelley said.

LBW Director of Institutional Advancement Chrissie Duffy also spoke on the Dixon Foundation’s many contributions over the last 40 years.

“Thanks to the support of the Solon and Martha Dixon Foundation, we have been able to maintain a level of technical excellence that has allowed us to host hundreds of professional events through the Covington Arts Council, as well as our beloved local productions, countless recitals and pageants, including regular performances by the Andalusia Ballet and LBW’s own Ensemble,” said Duffy. “With new upgrades in place, the theater will remain a state-of-the-art theater and be able to accommodate and meet the needs of professional touring companies for many years to come.”

Renovation to the Martha and Solon Dixon Center for the Performing Arts entrance was completed in 2010. A landscape enhancement plan for the Andalusia Campus was also developed. The first phase was completed in 2012 and included a drop-off area in front of the Performing Arts Center, an enhanced streetscape along Dannelly Boulevard with improved drainage, new curbs, angled parking, more than 40 new trees, and additional attractive street lighting.

The Solon and Martha Dixon Foundation has provided funds to replace older equipment and add new technology through the years as well as replace curtains, seats, and enlarging the lobby.

“A full refresh of the Dixon Center’s key components was proposed in May 2021. The first phase of this project has been completed, including replacing microphones, purchasing a new sound mixer, adding a new lighting console, and beginning to replace older lamps with moving LED lights with a $116,000 injection from the Dixon Foundation. To complete the equipment refresh and guarantee the Dixon Center’s continued professional level of production, the Solon and Martha Dixon Foundation has agreed to fund the completion of the equipment refresh at $283,000,” according to a LBW statement.