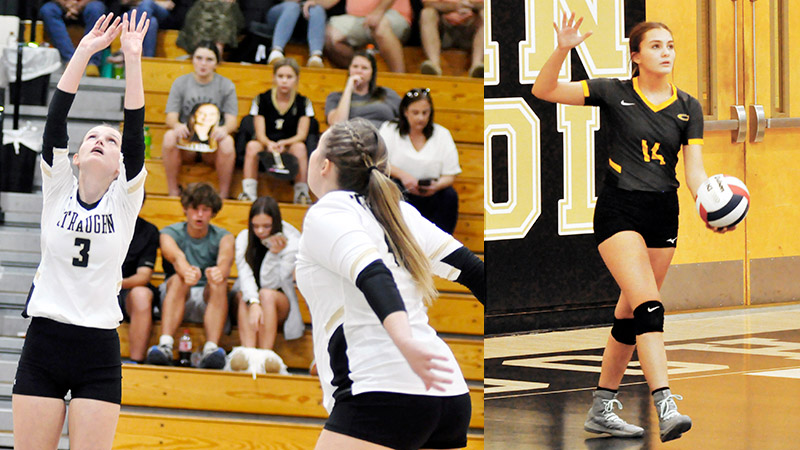 Straughn swept Opp 3-0 in varsity volleyball action Tuesday night. LEFT: Straughn’s Katelyn Dewrell prepares to set the ball during a play on offense. RIGHT: Opp’s Ada Blackstock gets ready to serve the ball during a 3A Area 3 match Tuesday. (PHOTOS BY ZACK MAIO)

“Our girls started a little slow at the Kinston tournament coupled with our first area game against New Brockton. As long as we progress throughout the year and push hard to get better and better instead of starting slow, we can overcome that. I think beating Opp, one of our big area rivals, 3-0 tonight sets the precedence for us, so we’re excited as we go to Pike County for another area match Thursday. I’ve told the girls it’s better to peak later rather than early,” Head Coach Deidra Burleson said.

SET 1 (Straughn 25, Opp 20)
Straughn took a 1-0 lead before Haylei Henagan tied the score with a kill. Presley Melvin made the score 3-2 with a kill, and Kaylee Murphy had an ace for a 5-4 lead. Opp fell behind 10-5 before Megan Pinson capped a 7-0 run with an ace. Mallory Hall evened the score at 12-12 with an ace. After the Lady Bobcats took an 18-15 lead, Katelyn Dewrell started an 8-0 surge with a kill. Alyssa Richardson hit a blistering kill for set point as Murphy gave the Lady Tigers a 1-0 lead with an ace.

SET 2 (Straughn 25, Opp 22)
Claire Howe earned two kills and made the score 3-0 early in set two. Cuba Wiggins put the Lady Bobcats on the board with a kill. Howe then added an ace, and Hall gave the Lady Tigers a 10-4 lead with a mighty kill. Brooke Butler notched an ace for Opp who roared back and took a 13-11 lead with a 9-1 run. Straughn responded when Hall tied the score at 15-15 with an ace. Carlin Bates followed with three kills for a 20-16 margin. Amiya Thompson drew the visitors even at 22-22. Kylee Brown gave the hosts a 23-22 advantage before consecutive aces from Murphy sent the hosts to a 2-0 lead in the match.

SET 3 (Straughn 25, Opp 20)
Both sides split the first 10 points of the third set. Richardson sparked a 6-0 run with a kill as Murphy added two more aces for an 11-5 lead. Isabella Grissett delivered a kill, while Butler collected an ace and trimmed the deficit to 11-9. After the Lady Bobcats pulled within three at 17-14, Richardson tallied two more kills. Dewrell executed an ace as the Lady Tigers took a 20-16 lead. Opp fought back and cut the deficit to 23-20 before Straughn took the sweep.

Both teams return to action Thursday, Sept. 1. Opp is scheduled to host Brantley at 4 p.m., while Straughn makes the trip to Pike County for a 5 p.m. area match.