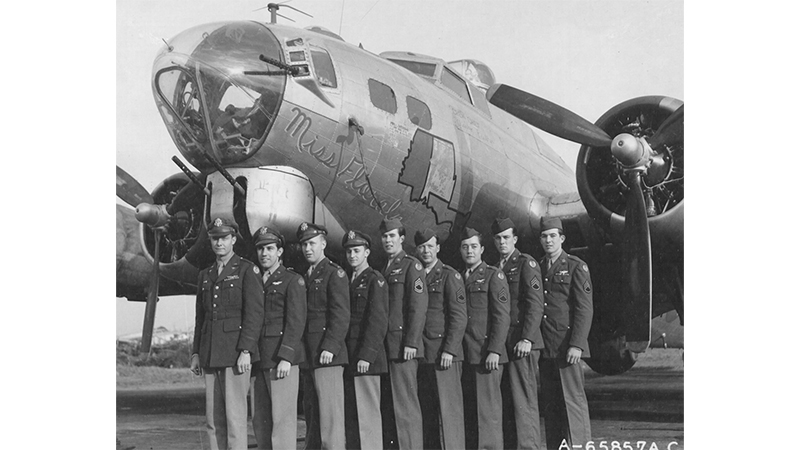 One of the early crews of the B-17, "Miss Florala." [Photo: The American Air Museum in Britain]

On April 8, 1945, B-17 44-6173, “Miss Florala,” was lost to flak over Germany. The nose art on the bomber showed the outline of the states of Mississippi, Florida and Alabama. We’re not sure why the name, “Miss Florala,” was chosen, but it seems reasonable to assume that one of her earlier crews was from those three states. The name and nose art can be seen in the accompanying photo.

The aircraft was over Stendahl, Sachsen-Anhalt, Germany, at approximately 12:15 pm local time, when it was hit by flak. Their bombs had just been dropped when the plane was hit by flak, causing the bomb bay door motor to catch fire. Late in the war, planes dropped bombs when the lead plane’s bombardier released his bombs. This was done by a toggle switch and the airman operating the switch was called a “togglier,” a combination of “toggle and bombardier.”

“Miss Florala’s” togglier was badly injured by the flak and was being assisted by the navigator. The co-pilot and flight engineer went forward to help the navigator. The co-pilot tried unsuccessfully to close the bomb bay doors but they remained stuck, half-open. The radio room was on fire so the pilot broke formation and dove the plane to 10,000 feet in an unsuccessful attempt to put out the fire.

While they were still about a thousand feet in the air, the Germans started firing at them. The tail gunner landed in a tree, slipped out of his parachute harness and dropped to the ground. All the while, the Germans were shooting into the tree. The radio operator landed some distance away. Neither were hit by the gunfire. The tail gunner took off his heated flying boots, put on his regular shoes and took off looking for the radio operator.

The two met at about 1:30 pm local time. The tail gunner, Sgt. Edward P. Houser, and the radio operator, T/Sgt. James H. Hayden, made a final statement, “The landing area was slightly south of Waake [east of Gottingen] and to our knowledge, we were the only two of the crew to get out. The plane came down about 1 ½ miles south of us.”

The two men gave their statement after they had been returned to base in England. In a twist of irony, none of the six crewmen killed in the crash were from Mississippi, Florida or Alabama.

The pilot, 2nd. Lt. Harvey E. Adelmeyer, was from Wisconsin; the co-pilot, 2nd. Lt. John W. Frampton, was from Minnesota; the navigator, Flight Officer Norman E. Melvin was from Maryland; the flight engineer and top turret gunner, T/Sgt. Richard E. Dailey was from Washington; the waist gunner, Sgt. Robert G. Cobb was from Missouri; and the togglier, S/Sgt. Edward J. Dybicz was from Illinois.

The author would like to thank Charles Smith for telling him about the B-17 named “Miss Florala.”