The August preliminary unemployment rate for Covington County saw a decrease to 2.9 percent.

The August rate decreased from July’s rate of 3.2 percent, which was also the same rate from August 2021. The county’s rate is slightly higher than the statewide rate of 2.6 percent.

Covington is ranked 29th for unemployment among Alabama’s 67 counties. 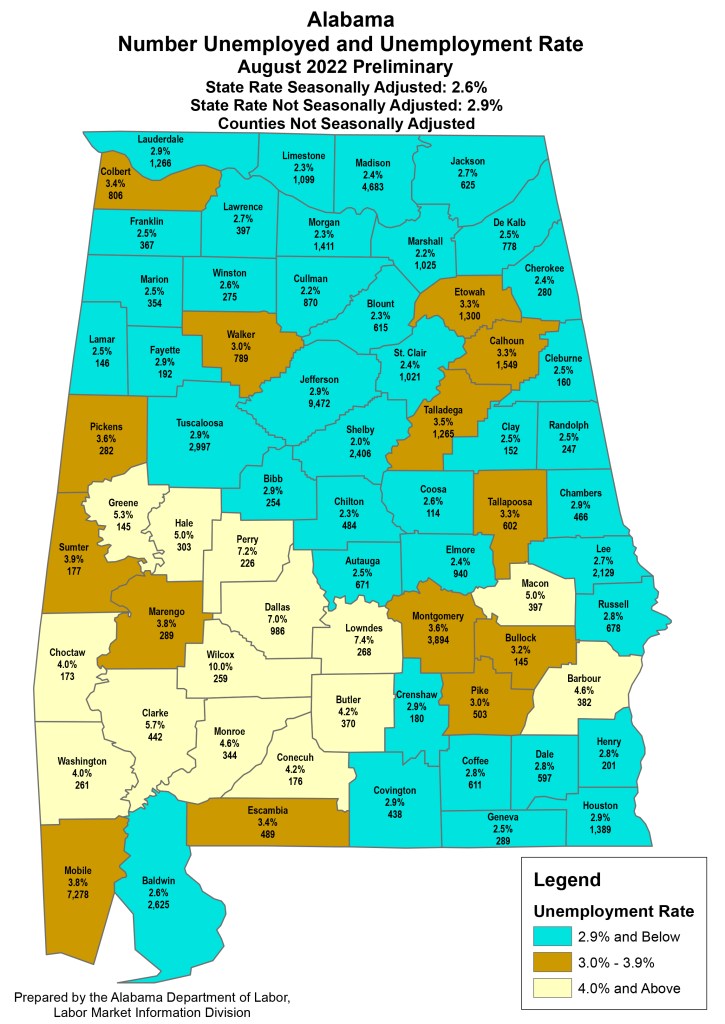 In other counties across the area, Geneva recorded the lowest unemployment at 2.5 percent. Butler and Conecuh counties each had the highest at 4.2 percent, but Butler was down from July’s rate of 4.7 percent while Conecuh was down from the previous month’s 4.6.

Coffee County’s unemployment rate for August was 2.8 percent; Crenshaw County was 2.9 percent; and Escambia County came in at 3.4 percent.

“Alabama continues to maintain its record-setting recovery with this month’s numbers,” said Governor Kay Ivey. “All of our metrics continue to move in the right direction, and we’re seeing more and more people joining our labor force. This positive news displays that Alabamians are confident they can land a job. Opportunities are abound in Alabama, and we’re proud of our continued progress.”

“We continue to add jobs to our economy at a good pace,” said Labor Secretary Fitzgerald Washington. “Right now, there are around two available jobs for every unemployed person. Our construction industry is thriving, and growing construction employment generally tends to predict positive economic growth.”

Over the year, wage and salary employment increased 36,800, with gains in the construction sector (+9,800), the education and health services sector (+9,300), the trade, transportation and utilities sector (+7,100), among others.

Counties with the lowest unemployment rates are: Shelby County at 2 percent; Marshall and Cullman counties at 2.2 percent, and Morgan, Limestone, Chilton and Blount counties at 2.3 percent.

Counties with the highest unemployment rates are: Wilcox County at 10 percent, Lowndes County at 7.4, and Perry County at 7.2 percent.

Major cities with the lowest unemployment rates are: Vestavia Hills at 1.6, Homewood and Trussville at 1.8, and Alabaster and Hoover at 1.9 percent.

Major cities with the highest unemployment rates are: Selma at 8.5 percent, Prichard at 6.5, and Anniston at 4.6 percent.