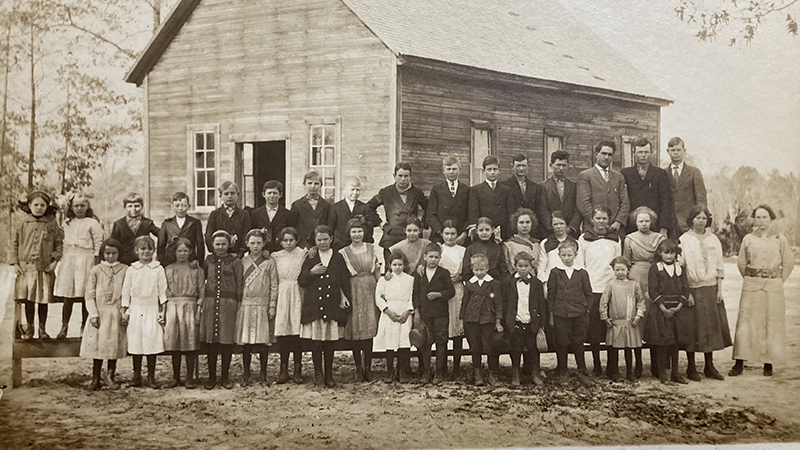 What a surprise when over two dozen vintage cardboard photographs were brought to me for placing at the Three Notch Museum. Mary Kirkland, an Andalusia resident who has been a collector of old things for many years found at yard, garage, attic, and estate sales, thought that the historical society might be interested in these pictures. She has willingly and generously donated them encouraged by her friend Belinda Marvin. These fragile and delicate treasures are surely over 100 years old and are pictures of one-room schoolhouses which were probably located in Covington County.

The ones that are indeed labeled include communities including Antioch, Mount Chapel, Coldwater, Garrison, Red Oak, Liberty Hill, Bay Spring, Red Level, Campbell Chapel, Brooks, Babbie, and Sanford. Others in this collection need identifying. They are housed at the Three Notch Museum if any of you readers can look at them and help name the schools, the students, and the teachers.

In the United States, the concept of a “little red schoolhouse” is one that has been preserved and celebrated as a symbol of frontier values. The parents in most cases kept up the school grounds, painted what needed to be done, chopped and stacked wood for the heater, patched steps and doors, and mended roofs and windows that leaked. When necessary, a one-room schoolhouse might have been enlarged to two rooms.

Today it is estimated that there are more than 200 early schoolhouses listed in the U. S. National Register of Historic Places. The River Falls Post Office which served as not only a post office but also a doctor’s office and schoolhouse is now located on the grounds of the Three Notch Museum thanks to the Houston family who first donated it to the city of River Falls and later the Pebworth family who donated it to the historical society. In its original location, it was said that the structure was the most photographed building in the county. 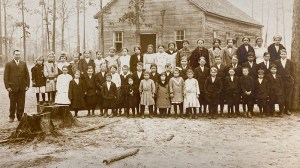 This wooden building houses memorabilia exemplary of an historic one-room schoolhouse. Even the dunce’s chair is placed in a corner spot!

Some of these pictures we recently received display groups of students. It appears that some of these shots were taken in cold weather and others in warmer weather based on the clothing and the shoes (or no shoes) worn by the children. There are younger smaller children and older bigger children, all precious likenesses of the boys and girls of long ago. Some scenes feature male teachers while others are female “school marms” posing, the ones that old timers stated “ruled with the firmness of iron!” A typical teacher’s salary was $35. a month according to some accounts.

In the 1800s and early 1900s, most American students in rural areas attended one-room schoolhouses near where they lived. Typically, an unmarried teacher would teach students in the 1st through the 8th grades, and, bless her heart, she taught them all ages with help sometimes from the older youngsters. The number of students varied from 6 to 40 or more. Students all sat and met in one room. The basics were taught, everything from the ABCs to Algebra but always “readin’ and writin’ and ‘rithmatic taught to the tune of the hickory stick!”

The McGuffey’s Readers were among the first textbooks in the U.S. They emphasized spelling, vocabulary, and formal public speaking, a common requirement in the 19th century America. McGuffey’s series of grade levels (1-6) consisted of stories, poems, essays, and speeches. The advanced readers contained excerpts from the works of well-regarded English and American writers and politicians.

McGuffey, a conservative theological teacher, attempted to give schools a curriculum that would instill Presbyterian Calvinist beliefs and manners in their students. The later versions replaced content with middle-class civil religion, morality, and values.

Several stories were written on this county’s early schools in the “Heritage of Covington County” (2003 edition). Curtis Thomasson, one of the county’s notable historians, genealogist, and historical society member of long standing, was a driving force behind getting that volume compiled. Older citizens wrote, “The structures had one or two rooms; a front door, a large pot-bellied wood-burning heater; and a blackboard in each room. Members of the community got together and bought or built desks. Outdoor restrooms were built behind the school – one for the girls and one for the boys placed far apart and usually in the woods. An open well was the source for water until hand pumps were installed. School recreation included playing marbles and jacks, spinning tops, jumping rope, hopscotch, and dodge ball, or just boys tussling in the sand beds. When girls played basketball, they had to wear bloomers.”

School nurses sent by the county would visit on occasion checking students for hookworms and head lice and then give appropriate treatments.

These schoolhouses were commonplace throughout rural areas of not only America but also in such countries as the United Kingdom, Ireland, Spain, Sweden, Canada, Australia, New Zealand, Norway, and Prussia.

The Fletcher School in Andalusia on what used to be called the Brewton Highway (Hwy. 29 S.) was attended by children who lived in the vicinity on South Three Notch and down the Brooklyn Road. The late James Arthur Wilson, long-time teacher and principal of the Andalusia High School, remembered his days at that school as a school boy. He recalled, “All of the children walked to school carrying their lunches in a syrup bucket. This lunch pail contained leftovers from breakfast with mainly a ham or sausage biscuit. If you were lucky, the biscuit may have had a hole punched in the middle with syrup or jelly inserted. Baked sweet potatoes or taters and cornbread were often included.”

In the spring and in the fall, it was a common practice for the students to help out on their family farms. That was also true for the teachers as well. School was taught routinely in mid-summer and mid-winter. There are, of course, exceptions to this.

Gradually these community schools became consolidated. The wooden schoolhouses were abandoned. In some cases, these schools were used for community events such as square dances, singings, barbeques, and other social events. Time passed resulting in disrepair from weather issues, season changes, and pure neglect from the schools being vacant.

In the majority of these old photographs, students appear to be dressed up for the picture-taking. Some of the boys were wearing suits with ties of that era. The girls wore what were called “midi” dresses (drop-waist) at the time. In other words, they knew to come to school that day prepared to have their picture taken.

In the popular tv series that aired for so long, “Little House on the Prairie,” the McGuffey Readers are frequently seen being used at the schoolhouse. Industrialist Henry Ford cited McGuffey’s Readers as one of his most important childhood influences. Ford republished all six Readers from the 1867 edition and donated complete sets to schools across the U.S. 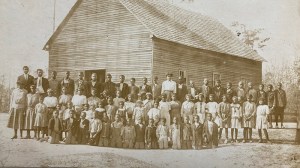 He thought there was great value in students being encouraged to memorize and read aloud.

It is interesting to know that McGuffey’s Readers are still in print and may be purchased in book stores across the country. Even today, many homeschooling parents use the McGuffey’s Readers to recapture 19th century conservative values for their children.

I Remember When some of the teachers of my generation that we were fortunate to have in school were no doubt reared in the one-room schoolhouse time frame. Thinking back, it is quite evident their education was in that setting because of the knowledge, the mannerisms, the highest levels of ability, and traditional religious values they possessed.