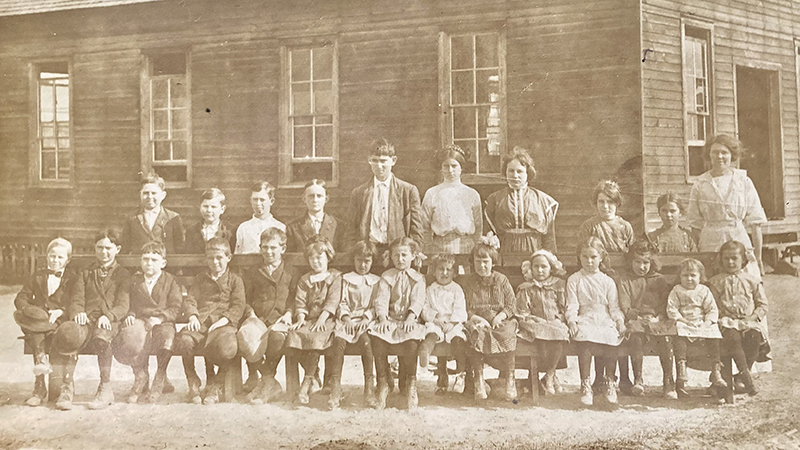 Always when I occasionally eat a sausage, ham, or bacon biscuit like I did this morning, my thoughts take me back to the one-room schoolhouse days and my old school principal at the Andalusia High School James Arthur Wilson. After he retired, he became a member of the historical society at which time he shared how he walked to the Farmers School on the Brewton Highway every morning, rain or shine.

His tin lunch pail (syrup bucket) was by his side with that biscuit stuffed with either a piece of leftover breakfast meat or sometimes just some syrup or jelly inserted through a punched hole. He was amused by telling this story that happened so many years before but lingered in his memory. I remember that Mr. Wilson donated one of the very first artifacts given to the Three Notch Museum back in the mid 1980s, a cotton weight. Bless him. Reminds me of the widow’s mite story in the Bible.

Mr. Wilson was not financially able to go to medical school during the Depression days, but he sent his son who became Dr. James Wilson. Who we affectionately called JAW, Principal Wilson could step right in the classroom when the biology teacher got sick and had to leave school in the middle of the day and teach the class as a substitute teacher without blinking an eye. More than likely, he was educated on the McGuffey Readers at the Farmers School on the Fletcher property.

In 2003 Wyley Donald Ward wrote a booklet “History of Public Schools in Covington County, Alabama.” He penned, “All of these schools have an interesting story to tell. It is hoped that the data given here will encourage and assist others in writing the history of some of these schools which shaped the lives of many residents of Covington County throughout the years.”

Ward mentioned that photographs of the teachers and students in most of the one-room schools in the county were taken during the period from 1900 through the 1920s. Probably the majority of these are in private collections. It is believed that the Dixie Studio’s C. C. Moon may have taken these pictures. These are the ones that were recently generously donated to the Three Notch Museum, more than two dozen or so by Mary Kirkland, a collector of antique mementoes. Citizens are already visiting the museum to see if they can recognize any of their relatives or the old school houses.

By 1860, at least 50 percent of the white children in Covington County could read and write.

The Civil War brought an abrupt halt to the progress of the public school system in Alabama and Covington County. By 1863, there was little schooling, but by the summer of 1866, about one half of the county schools had been reestablished with the exception of the three townships which had large black populations where there were none in that year.

Many of the schools lasted less than 3 months. Teachers were paid between 50 cents and one dollar per school day, but most of the teachers probably received other pay from student tuitions and local contributions.

The names and locations of the schools that existed during the Antebellum and Civil War years could not be found. Neither could the names of the school officials or school teachers. The schools were probably located near churches or post offices or Masonic lodges or in privately owned buildings.

Based on information in early newspaper articles, most of the public schools held in Covington County prior to 1900 did not have names but were sometimes referred to by the name of the church or post office serving the community or by the teacher’s name or by the person who owned or donated the school building. This was true of the Stanley School near Red Oak.

Even though some of the one-room or two-room schoolhouses taught all grades up to about the 8th grade, there were some schools that were primary, some intermediate, some grammar, and others referred to as high school between 1874 and 1876.

The earliest known record mentioning a specific high school in Covington County was in an article in the August 24, 1889 issue of The Covington Times.

“A mass meeting of our citizens was held at the Baptist Church on Tuesday afternoon for the purpose of devising ways and means for the building of a suitable house for a high school……By sundown, the handsome sum of $700. was submitted (raised) and reported by William Riley, one of the committee persons appointed. This is indeed encouragement and in the near future, our town will have a high school building to which her people can point to with pride.”

A January 11, 1890 article appeared in the newspaper stating that “Miss Jessie Albritton of Mount Olive, North Carolina has returned to Andalusia to open a school in the Academy.”

The Andalusia Academy building was constructed on South Three Notch Street on a 2-acre lot about 100 yards south of the RR tracks. This is the current site of where the Christian Service Center is located today. The contract for building the new academy was awarded to J. A. Prestwood who owned a saw mill and much land.

On November 2, 1894, a letter to the editor appeared which stated that “On Saturday night, November 10th, Prof. L. H. Jackson and his school will give to the public an appreciative ‘house-warming’ in our beautiful new Academy building. This is a compliment to those whose generosity and public spirit have made it possible to have an excellent school in Andalusia.”

Those first classes were opened November 13, 1894. That house served as the high school through the 1898/99 school year. It seemed that Prestwood never deeded the school house or the lot on which it stood to the board of trustees. Prestwood sold the property to Ida O’Neal, the wife of Clanton S. O’Neal, who converted the school house into a residence where members of that family lived for many years.

Early public school officials are listed in Ward’s book. He is credited with the pain staking job of much research in compiling statistics regarding sixteenth section land which when divided up and purchased would be sold with monies to be given to the township trustees to be used for the schools. Much legislation was passed beginning in 1828 designating where funds for sales of these parcels should be deposited.

There is some evidence to indicate that some of the money paid for sixteenth section land in Alabama was skimmed off before it was placed in the correct fund.

The first tract of sixteenth section land sold in Covington County was in 1842. Located in the Conecuh River Township, the land was an 80-acre parcel containing a large permanent spring, the site of an aboriginal Indian village which had been cleared for farming before the whites moved to the area.

According to Ward, “The concept of Federal land grants to support public education predates the U. S. Constitution. It was the first attempt by the Federal Government to establish and fund a uniform public school system for every community in all the new states admitted to the Union.”

Consolidation of rural schools in Andalusia, Opp, and Florala, white and black schools, are outlined in Ward’s book. He states, “There was considerable support and opposition to the rural school consolidation movement in Covington County, and the politics got ugly.”

In Ward’s summary, he stated, “There were certainly some outstanding achievements and failures during the development of the county’s public school systems. The most shameful aspect of Alabama’s public school system was the unfair treatment of black schools under the provisions of the 1901 constitution during the first half of the Twentieth Century.”

Many thanks to Wyley Ward for the documented information on the creation, operation, financing, and performance of public schools existing in Covington County from 1821 through 1921 as well as a brief discussion given on the consolidation and integration of the county’s public schools between 1921 and 2000. No one else to this writer’s knowledge has ever ventured to research and compile such detailed information where we can Remember When and be proud but at the same time ashamed.

“School days, school days, dear old golden rule days…” May we learn what we need to know from the one-room schoolhouse days and move forward to the future with greater insights into providing a good education for the children of Covington County. “A PROUD PAST, A PROMISING FUTURE should be our motto with the emphasis on the future!