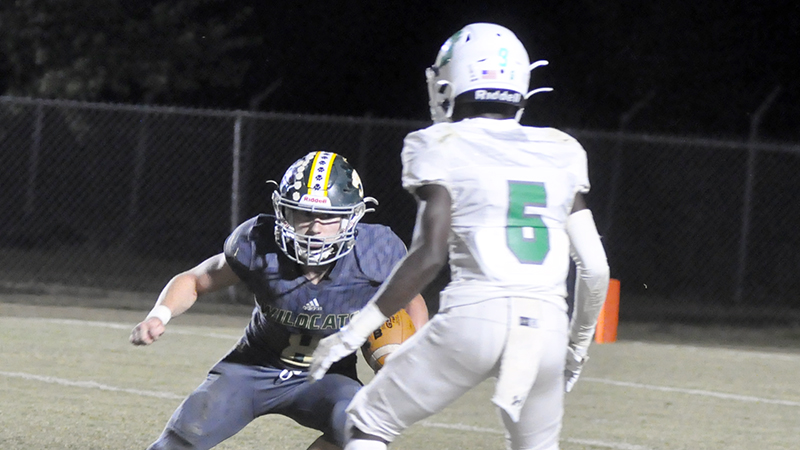 Brantley clinched the two seed in the region with a 53-25 region win against Florala in the final regular season contest for both teams Friday night.

Brantley (8-2, 7-1 1A Region 2) took an early 6-0 lead when Jayden Parks threw a 53-yard touchdown pass to Jon Bush on the first play of the game. Florala (7-3, 5-3) began its opening possession with a 15-yard pass from Rayshon Coleman to Christian Greasham and a first down to the 46. The defense rallied back and forced a punt.

Robert Shine had a 30-yard run on the second play of the next drive into opposing territory. Following back-to-back offensive holding penalties, Parks delivered a 30-yard strike to Kedrick Brown and set up first and goal. Two plays later, Parks scored from four yards out, and a successful conversion gave the Bulldogs a 14-0 lead with 3:50 left in the first quarter. Johan Zamora gave the Wildcats a first down on second-and-6, and Coleman sprinted for an 11-yard gain. Zamora then moved the chains with a 12-yard run to midfield before a costly fumble.

Brantley needed only four plays and pushed its lead to 20-0 on a 35-yard touchdown pass over the middle by Parks to Jordan Parks. Zamora closed the opening frame with a 37-yard run around the left side. Coleman connected with Greasham for a 24-yard on the initial play of the second quarter. Three plays later, Dalton Jackson crossed the goal line from a yard out and converted the PAT as Florala cut the deficit to 20-7 with 9:52 remaining in the first half.

The Bulldogs started at the opposing 47 and capped a four-play drive with a 2-yard touchdown scamper by Shine. The score remained 26-7 after a failed two-point try. Colby Strickland hauled in a 25-yard reception on the ensuing drive aided by a facemask penalty. Jordan Parks put an end to the possession with a pick-six and took the margin to 32-7. After Bradley Norman intercepted a pass for the Wildcats, Zamora had a 16-yard first-down run. Jayden Parks called his own number with a 22-yard touchdown run, and the PAT was good for a 39-7 lead at halftime.

Florala began the second half with a 12-play drive and took seven minutes and 10 seconds off the clock. Following several rushing plays, Coleman converted on fourth-and-5 with an 8-yard pass to Greasham. Coleman blitzed into the end zone from three yards out and cut the gap to 39-13. Brantley used only 15 seconds and struck right back when Jayden Parks threw a 68-yard touchdown pass to Bush. The PAT was good for a 46-13 lead after three quarters.

Zane Weeks threw a 22-yard completion to Greasham in the early moments of the fourth quarter. Zamora polished off the rest of the drive with 24 rushing yards and a 4-yard score with 7:25 left in the game. Trevon Pittman closed the scoring for the Bulldogs with a 4-yard touchdown run, and the extra point put the score at 53-19. Coleman and Zamora each tallied long rushes for first downs. Coleman then went to the air and found Jackson on a 5-yard touchdown pass as the Wildcats ended the scoring.

Florala will travel to Millry (9-1) Friday, Nov. 4, in the first round of the 1A playoffs.