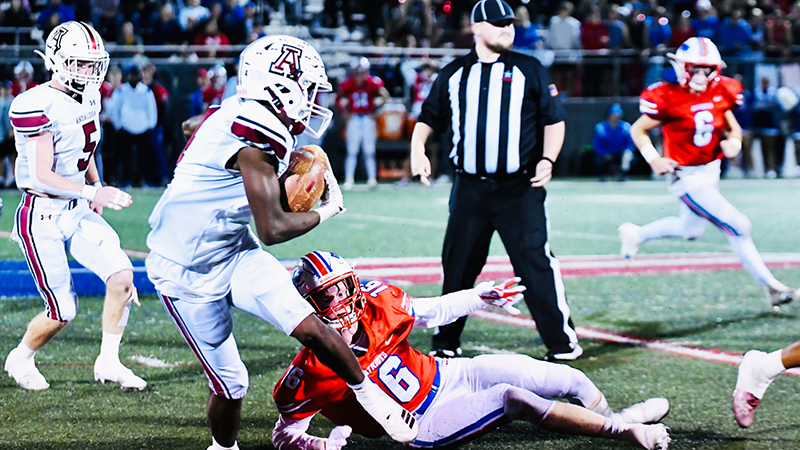 Andalusia used a strong attack on offense and defense for a 31-7 road win at American Christian in the second round of the 4A state playoffs Friday night in Tuscaloosa.

“It was not a very well-played football game by either side. There were way too many penalties, and we let our emotions get away from us. At the end of the day, we’re practicing football Monday and playing next Friday. I know absolutely nothing about Anniston and looking at some of the teams they’ve played, I don’t even know those names,” Head Coach Trent Taylor said.

Andalusia started the game at the 30-yard line. Dorean Crittenden converted a third-and-3 with a 19-yard run across midfield. Jack Lathrop had a 4-yard second-down pass to Tycameron Jackson for a first down. Following a holding penalty, Lathrop threw an 8-yard pass to Kaden Denson and a 13-yard completion to Jackson. Crittenden rushed 21 yards on four carries and capped the 11-play, 70-yard drive with a 4-yard touchdown run. Cobb Stewart added the PAT for a 7-0 lead with 6:58 left in the first quarter. The defense then forced American Christian into a three-and-out.

Crittenden found green grass on the next possession and took it 62 yards to the end zone. The two-point attempt failed and kept the score 13-0 at the 5:31 mark. The Patriots did not get anything going offensively but were given a reprieve when DJ Daly recovered a fumble. Carson Sute converted a third-and-16 with a 17-yard pass to Bubba Lester on the final play of the quarter. Sute then found Lester open in the end zone from four yards out. Daly split the uprights and cut the deficit to 13-7 with 11:14 left in the half. The Bulldogs were held in check on their next drive, and Eric Hines returned an interception to the 3-yard line.

Kolby Preskitt reached the 1-yard line before Xavier Marshall delivered a huge third-down sack. Andalusia made a huge defensive stand when Daly’s 32-yard field goal attempt was no good. Zerrick Jones had a 16-yard run for a first down aided by a personal foul facemask. After consecutive penalties set the ball back, Lathrop found Denson open for a 55-yard touchdown pass. Jones converted the two-point attempt and extended the lead to 21-7 with 5:14 to go until halftime. Davis Dare had a huge 48-yard kickoff return across midfield, but ACA was stymied once again.

Jackson electrified the Bulldogs with a big punt return to the home 20. Cason Clark booted a 32-yard field goal and took the score to 24-7 at the 2:36 point. Sute gave the Patriots a first down with an 11-yard third-down pass to Preskitt just before halftime.

Both teams began the second half with defensive stops. Sute started the next possession with a 26-yard pass to Lester and converted on second-and-10 with a 21-yard pass. The drive stalled when Garrett Blackston made a third-down sack. Jones earned a first down with a 3-yard run for the Bulldogs before another punt. Preskitt converted a third-and-6 for the Patriots, but Parker Adams made an interception to end the third quarter.

Andalusia converted on fourth-and-1 and set up a 10-yard touchdown pass from Lathrop to Denson. Stewart’s point after pushed the lead to 31-7 with 6:41 to go. ACA made one final first down before the game ended.

The Bulldogs finished with 301 yards to the Patriots’ 149. Lathrop went 9-of-12 passing for 99 yards with two touchdowns and an interception. Crittenden led the ground game with 13 carries for 130 yards and two scores as Jones followed with 18 carries for 71 yards. Denson grabbed four receptions for 78 yards and two touchdowns. Kameron Weaver paced Andalusia with 6.5 tackles. Marshall was next with five tackles, and Blackston tallied 4.5. Adams, Jacob Sellers, and Kaden Denson had four tackles each.