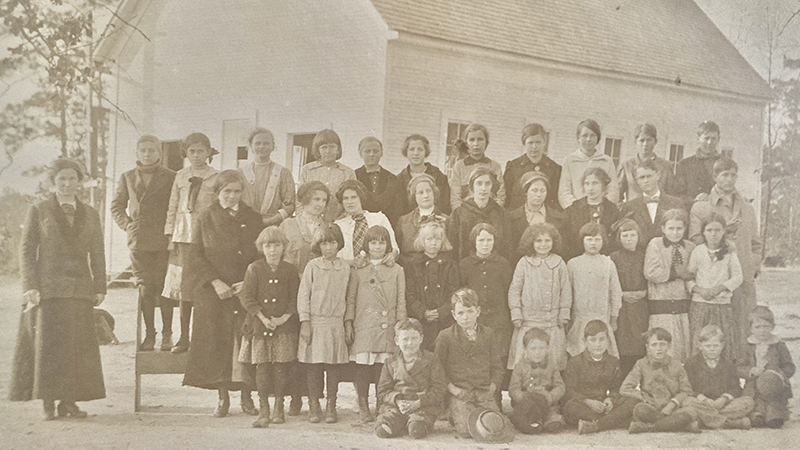 The late Miss Derlie Barnes, Covington County educator for 44 years, wrote and completed in 2002 the most delightful booklet, “Along the Way” about her life experiences which included her first teaching days beginning in 1925. I was reminded of this story by Caroline Eiland Busbee who has been enjoying my recent columns about the one-room schoolhouses that once dotted the hillsides of this county. Her mother, Margaret Eiland, helped to type material for the Barnes’ book. Opal Couch, Barnes’ niece, as well as friend and neighbor, Herb Carlisle, assisted in preparing and arranging final manuscripts and illustrations for this treasure of collections which kept Miss Barnes busy in her retirement years. She described her story as “life along a trail that I walked.” Heaven help me if I make a mistake in summarizing some of this precious story! 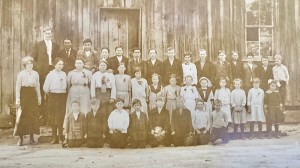 “Before consolidation of schools, the Carter School where Miss Barnes was a pupil was located a little east of the Red Oak Church. It was only one of more than a hundred small one-teacher, two-teacher, three-teacher schools of yesteryear in Covington County. Although these schools taught basic elementary education in short school terms, Barnes wrote, “One has only to look about today to find successful business and professional men and women who attended these small schools.”

The teachers were proud, respected, and dedicated people who served education well in the era in which they lived. It was the practice of the county superintendent of education and the county board to place beginning teachers in the one-room schools. A lot of young teachers had their first experience in isolated situations miles away from home with little chance of getting professional help. Teachers often boarded with families in the communities. Their typical room was a small one with a bed but no heat and no running water. She could warm by the family fireplace. Bathing consisted of using a washbowl of hot water carried from an iron kettle on the hearth. The homes were kept as clean as the lye soap and corn shuck scrub brooms could make them. Sheets were boiled and hung to dry once a week.

There were rules which the teachers were expected to follow. They had to live in the community where they taught and were allowed to go home only one weekend per month. They were not allowed to date or go to the picture show except on weekends. They were expected to attend church and teach a Sunday School class and required to trade at certain stores in the community. For the lady teachers, wearing short hair was frowned upon in some communities. Chewing tobacco or dipping snuff was a no-no. Some communities had strict rules on dating, and they kept a list of the young men whom the lady teachers were not to date. To defy rules would jeopardize one’s job.

At some point in time, teachers were required to attend an in-service training program in Andalusia on the first Saturday in each month. They had to arrange their transportation to and from town. “When the meeting was finished about three o’clock, everyone rushed to run errands, get a ‘hair fix,’ buy school supplies, and then ended up at the Brown and Broughton Drug Store where Captain Broughton would treat them with candy and ice cream before their ride would pick them up. Many stores on the square stayed open until nine o’clock giving customers who came to town on Saturday plenty of time to shop and take care of business downtown.”

The Carter School was described by Miss Barnes as being a typical one-room building constructed by local labor with rough lumber with a roof of wood shingles. A stage about ten inches high and eight feet wide extended across the classroom. The recitation bench and teacher’s chair was located on the stage. Long benches with high backs to which attached wide planks served as desks. The room was heated by a wood burning heater located in the center of the room with flue extending through the roof. Water for the school was brought up a long hill from a shallow spring. Everyone drank from the same wooden bucket using a tin dipper.

The school day began with the roll call and the opening exercises where the students sang, recited Bible verses, and repeated The Lord’s Prayer. Reading was the first subject for all classes where students in each grade were called to the recitation bench on stage to read orally. Stories enjoyed by the younger children were “Chicken Little,” “The Little Red Hen,” “The Three Bears,” and “Three Billy Goats Gruff.”

The upper grades read books and poems such as “Aesop’s Fables,” “King Arthur and His Knights of the Round Table,” “Poor Richard’s Almanac,” and selections from Greek mythology. They memorized many poems especially the patriotic ones such as “Hats Off, The Flag is Passing By,” and recited poetry on the stage in front of the blackboard.

Textbooks, most of them old, contained a wealth of literature for writing, spelling, language, arithmetic, and health with selections of famous authors and artists. Geography, history, spelling, and penmanship were taught. Pupils made use of the long lunch period with syrup bucket lunches followed by a variety of team games with physical activity such as “Goosey-Goosey Gander,” “What’s Your Trade,” jump rope in fancy patterns, stick ball, and singing games such as “Pop Goes the Weasel” and variations of The Virginia Reel.

Absenteeism caused by sicknesses such as measles, mumps, whooping cough, sore eyes, and hookworm were common childhood diseases. The people relied upon home remedies such as castor oil, spirits of turpentine, asafetida ball, tallow, camphor, beeswax, and a red flannel cloth saturated with a mixture of some of these supplies worn around the neck to ward off diseases. No one wanted to sit next to that boy or girl!

Weather conditions affected school attendance, too, especially if a student had to cross a creek or river walking on logs, planks, pine knots, or fence rails. If early morning weather was too rough, students were forced to stay home.

With farming being the principal occupation out in the country, at times during the planting and harvesting seasons as well as hog killing, cane stripping, cotton picking, corn and peanut gathering, and other special work days, it was necessary for the older children to help with the work. Little children could not walk to school alone so all of the children in the family were absent from school on those days.

Because there were few public funds for maintenance and care of buildings, the community raised money through box suppers, ice cream suppers, and cake walks. The school was able to purchase window panes, door steps, well ropes, and other needed repair items.

Miss Barnes who began her teaching career in the Bell Schoolhouse near the Yellow River remembered that she swept the schoolhouse floors with brooms made of broom sage and cleaned the yards with gallberry bush brooms. When the school was out of firewood, she would take students to the nearby woods where they would work several hours gathering wood after having walked herself two miles to school carrying an axe.

Miss Barnes believed that the basic education she received in the one-room schoolhouse enabled her to graduate from the Covington County High School and afterwards earn a B.S. from Troy State Teachers College and an M. A. degree from Peabody College.

A “Postscript” to “Along the Way” included a statement by Miss Derlie Barnes which read, “If I have encouraged one to appreciate the nation given us by former generations or to become aware of the wonderful world of nature, its beauty, its majesty, its wonders, then I am rewarded.”

“My prayer is that those lives which I was allowed to touch have been blessed. Lord, when you are finished with me here, I pray that you will take my feeble hand and lead me home. Amen.”

The 44-year teaching career of this Covington Countian began when Superintendent J. A. Keller hired her. She decided to apply for a teaching assignment at that time since there was little or no employment for women in 1925.

In summing up her first year of teaching at the Bell Schoolhouse, Miss Barnes said, “During that year, I learned what teaching was all about. I came to realize that every student, no matter what his circumstances, deserved the best that I had to offer. I knew that after that year, I had found the profession that was right for me and one that would bring me rich rewards.”

This month of November which is National Education Month, may teachers who read this column be inspired to Remember When these early pioneer teachers such as this dedicated one paved the way. Yes, things have changed from the “dear ole golden rule days,” but we can learn so much by looking back at stories like this “Along the Way.” 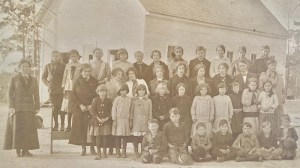