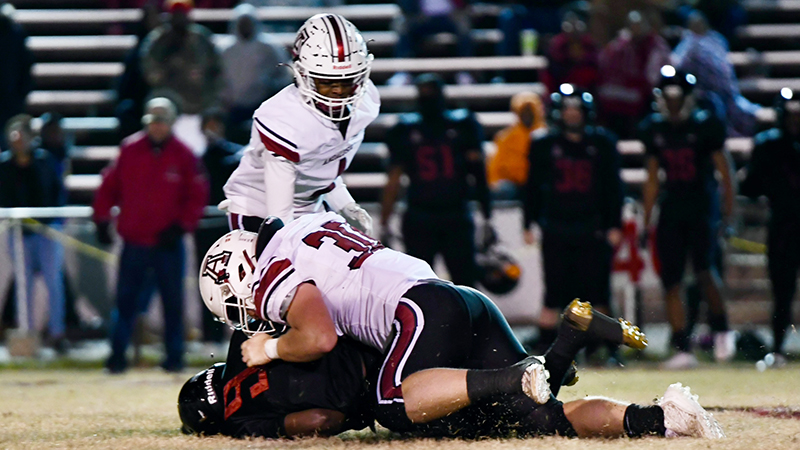 Josh Riley makes a stop on an Anniston defender with assistance from Tycameron Jackson during Andalusia’s comeback win in the 4A quarterfinals. (PHOTOS PROVIDED BY AHS BROADCASTING)

Andalusia erased a 21-point halftime deficit and punched its ticket back to the semifinals with a 35-28 thrilling comeback win at Anniston in a 4A quarterfinal game Friday night. 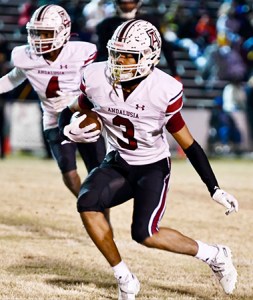 Kaden Denson looks for an opening during a run play for the Bulldogs at Anniston.

Andalusia improved to 12-1 on the season and set up a fourth-round rematch at region champion Montgomery Catholic (13-0) on Friday, Nov. 25. Anniston suffered its only loss of the season and finished the year 11-1.

“Wow, what a group of kids! The only thing I said to the guys at halftime when we got in the locker room and before we left was not to pay any attention to the scoreboard and just play. My God, you can’t say enough about these kids. We wouldn’t know what to do if we get to play at home, so let’s just do it again next week in Montgomery,” Head Coach Trent Taylor said.

Jaylon Cunningham began the opening drive with an 18-yard run but fumbled the ball to Josh Riley, but Andalusia could not capitalize on the miscue. Kamron Sandlin had a 26-yard first-down strike to Jamarius Billingsley. Sandlin threw a 27-yard touchdown pass to Cunningham a 7-0 lead with 8:11 left in the opening quarter. 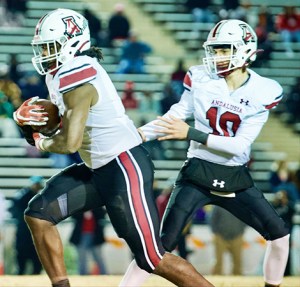 The visiting Bulldogs received seven yards from J’Marion Burnette and Dorean Crittenden but were forced into another punt. Sandlin converted a third-and-6 with a 46-yard completion to Javon Thomas. Cunningham then crossed the goal line from 14 yards out and gave the home Bulldogs a 14-0 lead at the 4:59 mark.

The two teams traded punts on their next two possessions. Anniston received a 12-yard run by Sandlin before a 13-yard gain from Malachi Taylor at the end of the opening quarter. Sandlin found Cunningham open on a 35-yard touchdown pass and a 21-0 lead with 10:13 left until halftime. Burnette and Crittenden each tallied three yards on the next drive, but Andalusia was held in check once again.

After a three-and-out by the home Bulldogs, Burnette opened the next possession with a 4-yard run. Jack Lathrop moved the chains for the first time with a 13-yard pass to Kaden Denson. Two plays later, Tycameron Jackson made a 16-yard reception to the opposing 20-yard line. Lathrop had a 10-yard screen pass to Burnette and set up first-and-goal. Brunson Wilson made a 6-yard grab to the 4-yard line, and Burnette reached the 1-yard line before the visiting Bulldogs turned the ball over on downs. 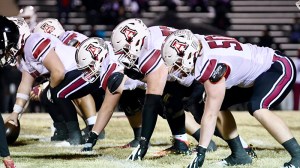 Andalusia’s offensive line gets ready to run the next play in a 4A quarterfinal game at Anniston.

Denson delivered a pivotal interception for Andalusia and returned the ball to the 1-yard line before a costly fumble into the end zone. Officials ultimately ruled a touchback as Anniston took over before the half ended.

Lathrop began the second half with an 8-yard pass to Denson. Burnette followed with two first downs across midfield, but the drive stalled. The home Bulldogs were stymied on offense and also had to punt. Lathrop connected with Denson on a 35-yard pass, while Burnette put the visiting Bulldogs on the board with a 10-yard touchdown. Cobb Stewart split the uprights and cut the deficit to 21-7 with 5:54 remaining in the third quarter.

Cameron Johnson delivered a huge second-down sack on defense and set up another interception by Denson. Anniston forced another three-and-out but rolled the dice on fourth-and-1 and came up short on a huge stop from Garrett Blackston. After a holding penalty, Lathrop threw a 17-yard pass to Denson on the final play of the third. Connor Dalton began the final quarter with a 14-yard first-down grab. Lathrop converted a clutch third-and-14 with an 18-yard pass to Jackson. Crittenden scored on the very next play from four yards out, and Stewart’s PAT brought Andalusia within 21-14 at the 9:47 mark.

Taylor came up with a 30-yard kickoff return and a 19-yard run for a first down. Cunningham added eight yards before Xavier Marshall recovered a huge fumble. Crittenden kept the next drive alive on third-and-3 with a 6-yard run. Lathrop delivered a clutch 37-yard completion to Denson at the 17-yard line. Denson took a 13-yard pass into the end zone as Stewart tied the score at 21-21.

The home Bulldogs earned one first down on their next possession but turned the ball over on downs. An interception by Jaden Dobbins set up a 5-yard touchdown run from Sandlin. The extra point took the score to 28-21 with 2:41 left in the game. The visiting Bulldogs responded with a quick two-play drive and evened the score with 1:39 to go. Lathrop found Dalton open on an 11-yard pass for a first down to the 41-yard-line. After an illegal shift penalty, Lathrop converted a 46-yard touchdown to Denson, and Stewart tacked on the PAT for a 28-28 tie.

Anniston went three-and-out, and Jackson executed a 47-yard punt return to perfection with a touchdown. Stewart put the score at 35-28 with 23 seconds left, and Jackson intercepted a pass on the final play.

Anniston outgained Andalusia in total yards 384 to 327. Lathrop went 18-of-31 in the air for 258 yards with two touchdowns. Burnette led the ground game with 15 carries for 45 yards and a touchdown as Crittenden added nine carries for 31 yards and a score. Denson was the top receiver with seven receptions for 169 yards and two touchdowns. Parker Adams led the defensive effort with eight tackles and was followed by Johnson at 7.5. Crittenden and Weaver each had six tackles, while Riley and Blackston both notched four.