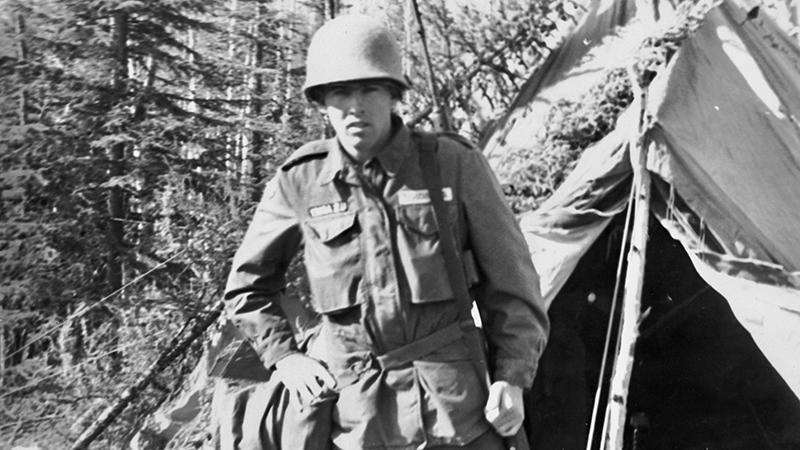 It happened on Good Friday in Alaska, March 27, 1964, at 5:36 p.m. local time. Jack Ammons recalled, “I just knew we were being attacked by the Russians. It wasn’t the Russians but it was the largest earthquake to strike North America…8.7 on the Richter Scale…It rocked South Central Alaska, causing hundreds of millions of dollars in damages and killing 78 people, with another 33 missing…I was terrified! I wasn’t trained for this…Tsunamis affected places as far away as California and Japan…We received more than 100 aftershocks…some areas of coastal Alaska experienced 90 feet sea surges…other areas sank 6-8 feet. In the months to follow, I experienced a side of the U.S. military that most Americans know little about.” 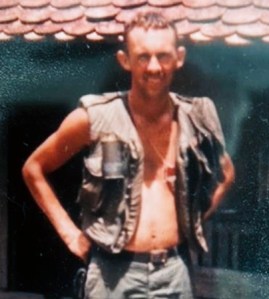 Sgt. Jack Ammons on a search and destroy mission in Vietnam, wearing the “uniform of the day” for hot and wet Vietnam. [Photo: Jack Ammons]

Jack Ammons was born December 12, 1942, on a farm in the small community of Brooks, located in north west Covington County, Alabama. His parents were Bob and Essie Ammons. Jack had a brother, Cecil, and a sister, Ella Mae. Life on the Ammons farm was hard.

Jack attended Red Level School through the 11th grade when his family moved to a farm in the Rome community in southwest Covington County. His dad told Jack and his brother that they were through with school and they would be working on the farm. Like many young men, Jack had relatives who had fought in WW II. An uncle, Tell Ammons, was killed in the war and a cousin, Bonnie Ammons had been a POW. When Jack turned 16, and received his driver’s license, he drove a disabled U.S. veteran, a Mr. Sowell, to the VA Hospital in Montgomery, Alabama. Jack recalled that Mr. Sowell had said, “War is Hell!!,” and that memory stayed with him.

On January 14, 1963, Jack joined Battery B, 117th Field Artillery, Alabama National Guard, in Andalusia, Alabama. He was sent for basic training to Fort Jackson, South Carolina, and upon completion, returned home for a few months. On November 15 of that year, Jack enlisted in the regular Army and was sent back to Fort Jackson for Advanced Individual Training. He arrived back in Andalusia around the time of President John F. Kennedy’s assassination on November 22, 1963. 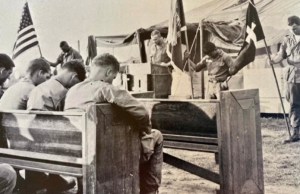 On January 12, 1964, Jack left his duty station in Fort Jackson and was ordered to Fort Richardson, Alaska. Jack remembered, “It was 40 degrees below zero and I became a member of the ‘Way Below Zero Club,’ and I’ve got my card to prove it.” He was just getting acclimated to his duty station in Alaska when the earthquake struck on March 27, 1964. During the rest of the year, Jack, and other military personnel filled the role of first responders. They did guard duty, provided vital supplies including water and food, provided electrical generators and much more. Jack recalled, “I was proud to be a part of that endeavor. I fell in love with Alaska and the Army that year…My life had taken on a new meaning.”

The year of 1965 provided several memorable events for Jack. He recalled, “In January 1965, I had an encounter with God when I found a ‘road map’ in Psalm 91. I used that ‘road map’ later in Vietnam and have used it ever since – it has served me well.” Within a few months, Jack recalled another incredible encounter, “I met a very special young lady, Emma Rose, on Easter Sunday, March 29, 1965. We were married on September 3, 1965, and moved off post to Chugiak, Alaska.” By that time, Jack had been promoted to Sergeant [E-5].

“In December 1965, we received notice that our unit, 4th Battalion, 23rd Infantry Regiment [4/23], would be deploying to Vietnam,” Jack said. His wife flew home to Oklahoma and on January 20, 1966, Jack and his unit boarded the troop carrier, USS LeRoy Eltinge [AP-154] for Hawaii. Jack remembered, “I was seasick the whole way until we arrived at Schofield Barracks on January 30, 1966.” Jack’s unit underwent jungle warfare training in Hawaii to prepare for Vietnam.

They departed Hawaii on April 15, 1965, and arrived at Cam Ranh Bay, Vietnam, on April 28. After a couple of days, they joined the 25th Infantry Division [nicknamed Tropical lightning] at their base camp located at Cu-Chi, Vietnam. The area was about 20 miles northwest of Saigon and had been controlled by the Viet Cong for years. It was riddled with tunnels, and in those early days of the war, it was not unusual for “Charlie” [nickname for the Viet Cong] to pop up out of a tunnel in broad day- light and take a shot at a GI.

Within a few weeks of being in Vietnam, Jack’s unit took part in “Operation Paul Revere.” Jack recalled, “We were operating with the ARVN [Army of South Vietnam] forces for control of an area in Pleiku Province. Our job was to establish and maintain communication for the 4/23 ‘Tomahawks.’ We were in the field for 14 days and learning quickly – nothing was routine. We were patrolling rice paddies, jungle, much of which was eerily beautiful, but you could face sudden death at any moment. It was hot and wet!”

The GIs were constantly on the lookout for Viet Cong booby traps such as the punji sticks [sharpened bamboo sticks, coated with excrement] that had been placed in concealed holes, trip-wire mines that went off if a wire was walked into and nails on a board, coated with urine.

There were also poisonous snakes and insects to watch out for. Jack remembered, “We all made it back safely on that first operation.”

On May 17, 1966, Jack witnessed a heroic action by their medical officer. Jack remembered, “One of my personal heroes was Captain Arthur Lewis, our Battalion Medical Officer. During a firefight, some of our men had been wounded and were lying in a mine field. Captain Lewis went forward, through the mine field to help them and was killed when a command detonated mine exploded. My radio operator, PFC Wing was with him but was not injured. He was never the same after that.”

In September 1966, Jack Ammons’ unit fought in “Operation KIPAPA,” along with the 1st Battalion [mechanized], 5th infantry Regiment. The operation’s goal was to find and destroy the Viet Cong that had infested the Filhol rubber plantation. The VC had entrenched themselves with a series of tunnels and bunkers within the plantation which was only 25 miles from the 25th Infantry Divisions’ base camp at Cu Chi.

The rubber plantation was full of dense underbrush and rice paddies, making it ideal for concealing VC ambushes. Jack recalled, “As the infantrymen and armored personnel carriers fought through dense underbrush, the VC would suddenly attack and run away. It created terror because you couldn’t see the enemy. You had no idea where the bullets were coming from. This was my second encounter of being pinned down and dodging bullets from an enemy you couldn’t see. I seemed to be in the VC’s crosshairs as I could hear the bullets go past and feel the breeze as it missed my head. I saw my first casualty of the war in that battle and it’s something I’ll never forget.”

The mission was deemed a success, as most of the enemy tunnels and bunkers were destroyed. They were credited with killing nine VC and they brought back about 45 suspected VC for questioning. Jack remembered another side of the mission, “Our medics took care of the Vietnamese kids in those small hamlets. It was called ‘Operation Helping Hand,’ where our medics held clinics for the sick kids and adults. On that mission, I saw the good, the bad and the ugly side of the war. I was lucky to have returned with no injuries.”

Jack and his unit returned to their base camp and settled into a normal routine of filling sandbags, cleaning showers, picking up supplies and digging a well for the battalion commander. Jack recalled, “He always had a project for us.”

Jack Ammons was witness to “Operation Ranch Hand,” an operation that still has long-lasting, deadly consequences to this day. U.S. forces in Vietnam and Laos sprayed around 20 million gallons of a deadly, dioxin-based herbicide throughout the countries. The purpose of the application of the herbicide was to defoliate the jungle hiding places of the Viet Cong and NVA. An additional effect was to make the soil sterile so that no crops could be grown. Little was known [or maybe we should say ‘made known’] about the harmful effects on the human body.

Jack recalled, “The herbicide came in a 55-gallon drum with an orange stripe on the side. We called it ‘agent orange’ because of the stripe. On one occasion, the Army sprayed a little creek that ran in front of the perimeter of our base camp. Shortly after spraying, all the vegetation was gone. We had no idea that the government was poisoning its own soldiers.”

After his discharge, Jack returned to Alabama for a short time before he and Emma felt the urge to return to Alaska. They moved there in 1967 and spent the next 32 years working and raising a family. Jack worked in the electrical wholesale business for the next 30 years or so. All three of their children were born there: Jeff in October 1967, Jenene in June 1969 and Jon in June 1972.

In 1988, Jack moved the family to Salem, Oregon, where he worked in the electrical wholesale business until 1997.

In 1997, the Ammons family moved home to Andalusia, Alabama, where they currently reside in the Green Acres subdivision. Jack looks back on his time in Vietnam with pride and is proud of the friends he made during that time. He recalled, “The Vietnam War got to be a ‘political war’ and divided our country. One of the reasons I agreed to write this was as a tribute to the more than 58,000 brave Americans who gave their lives. What a tragic loss of so many heroes! I was lucky and survived and have been living ‘the American Dream’ by following the ‘Golden Rule’ and by never missing an opportunity to do good. As Thomas Edison said, ‘Opportunity is missed by most people because it is dressed in overalls and looks like work.’”

The author thanks his friend and American hero, Jack Ammons, for allowing us to share his story. In the coming months, look for more on the Ammons’ family service members.