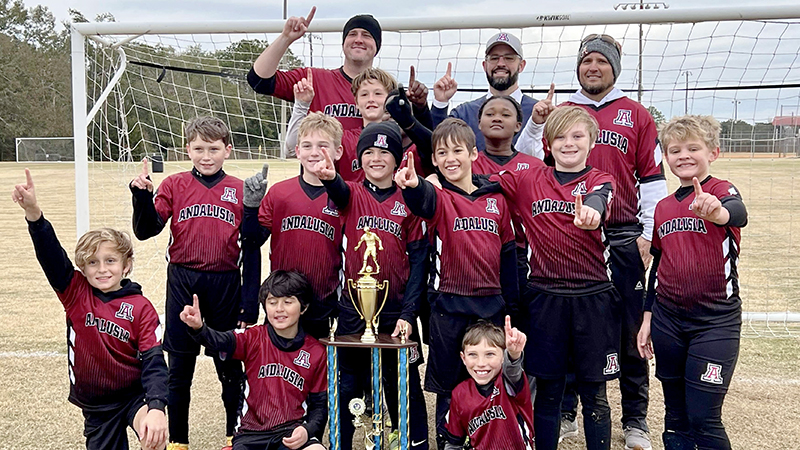 The Andalusia 10U All-Stars went undefeated in four matches at the ARPA State Soccer Tournament and won the title at Westgate Park in Dothan last weekend.

“This championship means everything as far as soccer goes. It makes all the long nights at practice in the rain and in the cold worth it. When that final whistle blows, and you win the championship, there is nothing like watching the excitement from the players and the fans. I don’t know that I have ever been part of a team that had more grit and am so proud to be a part of this team,” Head Coach Emmett Massey IV said.

Andalusia began the tournament with a 6-0 win over Huntsville in the first round and then edged Alex City, 2-1, Saturday, Nov. 19. Emmett Massey V scored all eight goals in the two wins. The Bulldogs advanced to the championship with a hard-fought 3-2 win over Athens and took down host Dothan, 2-1, for the trophy Sunday, Nov. 20. Talon Woodall scored two goals against Athens. Massey V added the third goal in the team’s semi-final win and both goals in the championship win.

“You really can’t measure the heart of a competitor. If we are being honest, we weren’t the most talented team there, but we just wanted it more. We teach a complicated style of soccer, but they paid attention and learned their positions well. A lot of kids had to learn a position they never played before, but they trusted us to put them where they needed to be for the team to succeed,” he said.

Massey added that only two players returned from the 2021 season.

“Last year, we were loaded at every position and honestly expected to win the state championship. This year was very different. We had several kids who had never made All-Stars before and at least one who had never played soccer before. All of them worked so hard, and it showed. We always preach for them to be All-Stars on and off the field.”

Andalusia hopes to carry the momentum from this year’s title into the 2023 season.

“Most of this team is young, so I expect a lot of them will be back in 10U next year. I hope they have learned that when you sink your heart into something, you really can accomplish anything. Next year, I hope they have the confidence to step up and lead the younger kids,” he said.

He paid tribute to those who helped make this season a successful one for the Bulldogs.

“We just want to thank God for the opportunity to play a sport we all love and the privilege to represent the city of Andalusia. I just want to thank Jason Martin and Nathan Daniels for coaching. They really are two of the finest people I have ever met. Thank you to the Parks Department for being there to support our kids. Most importantly, thank you to all the parents who have trusted us with their kids and supported this team. One of the best things about All-Stars is all the new friendships you get to make,” he said.