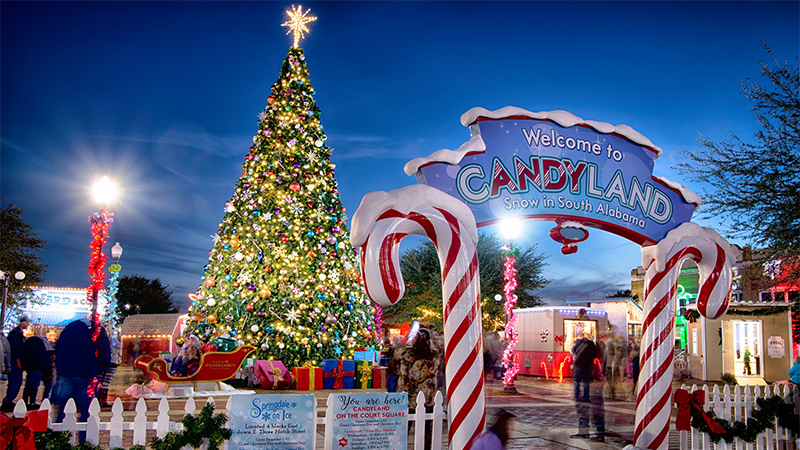 Christmas in Candyland will open for 2022 on Friday, Dec. 2, as scheduled. The City of Andalusia Christmas Parade will be held Thursday, Dec. 15, instead of the original date of Thursday, Dec. 1. (PHOTO PROVIDED)

Due to Andalusia High School playing in the 4A State football championship game, the annual Christmas Parade will be postponed until Thursday, Dec. 15, at 7 p.m.

Candyland will open as scheduled on Friday, Dec. 2, at 5 p.m.

The Andalusia Area Chamber of Commerce and city officials announced the decision to postpone the parade, originally planned for Dec. 1, after considering the large number of students and residents who are involved in, or who will be traveling to, the state championship game in Auburn on Friday.

AACC Executive Director Laura Wells said the decision was made after all parties involved in the planning of the parade, — security, traffic control, management of the event, participants, board members, city leaders, business owners and organizers — met over the weekend and decided as a group to make the change to ensure full participation from, not only entries, but citizens.

“We are so proud of the players, coaches, and fans who have helped to make this dream a reality for our community. This is an exciting time in our community,” Wells said. “We will be extending the deadline for entries and will continue to accept applications until Wednesday, Dec. 7.”

Those who have registered for the parade and will not be able to participate will receive a refund for the entry fee.

Candyland will continue as planned, although opening ceremonies will not be held.

“Given all the competing activities, we are not having a lighting of the Christmas tree on the square or a ribbon-cutting ceremony to open Candyland as we have in past years. We have already turned the tree lights on and will officially open Christmas in Candyland at 5 p.m. on Friday,” Wells said.