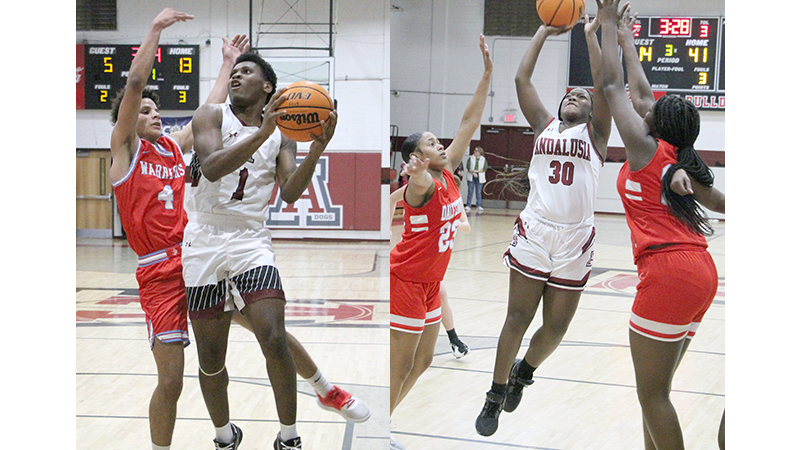 Andalusia came improved in area play Friday night when both the girls’ and boys’ teams scored wins over Dale County.

The Lady Bulldogs jumped out to a big lead over the Dale County Lady Warriors and went on to score a 54-17 victory.

Dianna-Grace Nelson set the pace early on for Andalusia, scoring a couple baskets, including a three-pointer. With four points each from Jaidy Berry and Kamari Gray, the Lady Bulldogs took a 19-6 lead after the first period.

Nelson added another six points in the second period with Zaniya Anderson adding four points. On defense, the Lady Bulldogs surrendered only a couple of free throws as the teams went into the half with Andalusia ahead 37-8.

In the third, Kionni Wright lead the charge for the Lady Bulldogs with six points and Khayria Reynolds led in the fourth period with four points to close out the victory.

Nelson led the Lady Bulldogs with 11 points while Anderson, Berry and Wright each had eight.

The Bulldogs took a big lead early, but Dale County came back to make things interesting down the stretch. Ultimately, the Bulldogs held on to score the area win 73-67.

Tyler Sigers and Tevin Sigers each hit three-pointers early on as the Bulldogs took a 20-9 lead after one period.

In the second, it was Cammeyun Love and Cadariyus Love setting the pace for the Bulldogs with a combined three three-pointers. Christian Sheridan added five in the period. Meanwhile, Dale County put up 26 points in the second to cut Andalusia’s lead to five points at the half, 40-35.

Andalusia increased its lead to eight by the end of the third period, led by Tyler Sigers’ nine points.

The Warriors got as close as only three points behind, but the Bulldogs 14 points in the final period was enough to claim the 74- 67 win.

Tyler Sigers led the Bulldogs with 19 points and Cadariyus Love finished with 13.

The Bulldogs traveled to Montgomery Monday where they fell 47-45 to Brewbaker Tech in the Park Crossing MLK Classic.

Andalusia welcomes Slocomb for another area matchup on Friday, Jan. 20. There will be three games with the JV team set to start at 4:30 p.m., followed by the girls’ and boys’ varsity teams.