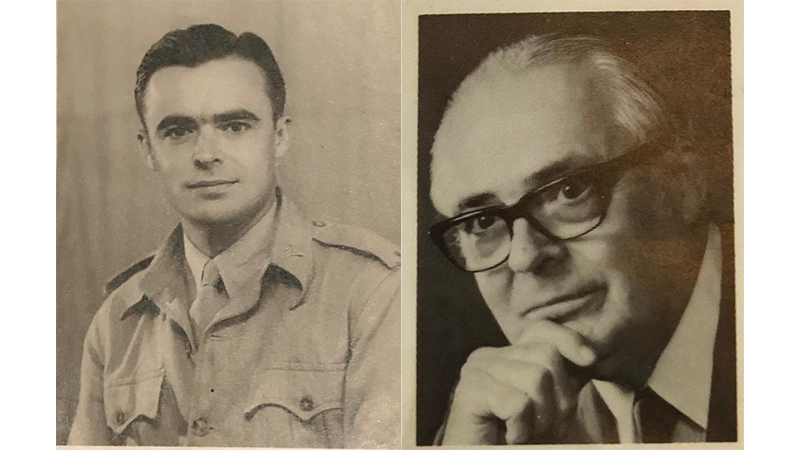 Soon after contracting typhus fever in September 1944, Captain Gary Cumbie had been flown from a medical facility in Burma to the large, 20th General Hospital in Assam, India. Most cases of typhus contracted in Burma at that time were classified as “scrub typhus,” a bacterial infection usually contracted from chiggers. A vaccine was produced later and flown to the CBI theater in June 1945. 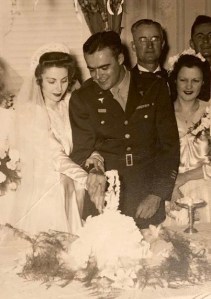 On November 4, Cumbie wrote his mother, “Happy birthday mother. Here’s hoping I’ll be home before you have another. Speaking of going home, 80% of all typhus cases are being sent to the States for recuperation. Each case is handled by a disposition board…Disposition is determined by severity of disease, complications and the type of work one does. Cases are divided by classes, from 1-10, with one being the most severe. I was put in “class one,” a large percentage of which die, but fortunately I pulled through. I have no complications and my work is not considered strenuous. Thus, my chances of coming home are practically nil.”

By November 1944, Cumbie was in his second month of recovery from typhus fever. On November 23, he wrote, “Didn’t get to Thanksgiving service as I was called over to help out here at the hospital. From now on while recuperating, I’ll be in charge of one of the medical wards. I’m very glad as it will help occupy my time.”

On December 3, Cumbie wrote, “I’m as good as well now and keeping very busy. I’m still listed as a patient and take my medicine, but I’m also doing full time duty. No doubt I’ll be moving on somewhere around Christmas.”

On January 1, 1945, Cumbie wrote, “I was discharged from the 20th General Hospital a couple of days ago and assigned to this field hospital [44th Field Hospital in Burma]. I flew into Burma and reported to this field hospital. I’m very happy as I know most of the medical officers and many of the nurses. We have a nice place to live, a nice mess hall…plenty of work. Now I’m just hoping I can stay at this hospital for the duration.” One of Cumbie’s mother’s letters to her son had been returned marked, ‘Enroute to the U.S.’ Cumbie explained, “That letter returned to you sounded good to me but that was a mistake. There was some talk of my returning when I was so ill but fortunately, I got well faster than they expected.”

On February 7, Cumbie mentioned a newspaper clipping his mother had sent, “The clipping you sent about the U.S. convoy from Burma to China was most interesting. I know the men mentioned and have lived in and visited all the towns mentioned. It’s almost unbelievable that a road could be built over such mountains, jungles and swamps.”

The road Cumbie referred to was the “Ledo Road.” In December 1942, U.S. General Lewis A. Pick was put in charge of building a 1,000-mile road from Assam, India, to northern Burma. The road was built to re-establish the land supply route to China which has been blocked by the Japanese earlier that year. The road was not officially finished until May 1945. Until that time, supplies were flown over the Himalayas into China by the U.S. Army Air Corps [this came to be called “flying the hump”]. Nearly 150,000 tons of supplies were carried over the road by the end of the war.

In March, Cumbie wrote “I received orders to report to the 98th Station Hospital…It is located in Shingbwiyang, in north Burma about 100 miles below Ledo. The theater medical consultant told me they had no one there who was experienced in tropical medicine. It is a new unit from the States.”

On April 15, Cumbie wrote, “We heard the sad news of Roosevelt’s death early this morning. I’m going down town to be an usher at a memorial service in the morning. Too bad he couldn’t have lived to see the end of this war.”

In his letter of May 10, he wrote, “I’ve had a most pleasant visit to Calcutta…I’m now staying at a city called Darjeeling. It’s very cold here…the scenery is beautiful…We go fishing, hunting, horse-back riding etc….It’s about 8,000 feet altitude, in fact the city is on the side of Mt. Everest.”

Back at the field hospital in Burma, Cumbie wrote on July 8, “On June 30, I finished my first six months with this field hospital…During this period, we’ve moved only twice, once to Myitkyina to Rhamo, then back to here.”

On August 12, Cumbie wrote, “We had several big parties this week over the rumors that Japan will surrender in a few days. Actually, that’s only a rumor but it definitely has some basis…With Russia entering the war and our use of the atomic bomb, things seemed to have changed.” He followed on August 15, “Well, it seems it’s all over but the shouting, speaking of the war….It’s almost unbelievable…Somehow, it’s hard to relax and feel happy when one thinks of the sacrifices so many have made…We at the hospital are carrying on as usual until notified otherwise.”

In his last letter from Burma and India, Cumbie wrote on September 15, “I left Ledo, Assam at 11:30 am yesterday…arrived in New Delhi about 1:30 pm this afternoon….As you know, Delhi is the headquarters of the entire CBI theater…The physical setup of the hospital here is indescribable…I felt like the little country boy who had come to town for the first time…The grounds cover acres and acres with green Bermuda grass that reminds me of the University of Alabama campus – streets and sidewalks all paved and the hospital buildings are all marble and brick and all painted white…Surgery and officer’s wards are air conditioned…each room has a refrigerator, running water and a ceiling fan…Sure would like to be on my way home.”

Captain Gary Cumbie returned to the States on February 4, 1946. While still on active duty, he married Carolyn Boatner in Troy, Alabama, on April 30, 1946. Following the wedding, Cumbie was ordered to Camp Pickett, Virginia, for processing out of the Army. He was discharged on July 16 from Fort Meade, Maryland. He had earned the American Campaign Medal, the Distinguished Unit Badge, the Asiatic-Pacific Campaign Medal and the World War II Victory Medal.

After his discharge, Dr. Cumbie and his wife moved to New Orleans where he worked for a brief time in a hospital. He worked all night at the hospital and slept during the day. Such an arrangement didn’t last long and the couple moved to Moultrie, Georgia, where he joined the practice of Dr. A. G. Funderburk. The couple’s first child, Caroline, was born in Moultrie in November 1947. In a little less than two years in Moultrie, Dr. Cumbie delivered 280 babies [this number was verified by the Georgia Department of Human Resources in a letter to Dr. Cumbie, dated August 6, 1983].

After leaving the Georgia practice, Dr. Cumbie moved his family to Andalusia, Alabama, in late 1947 or early 1948. The Gables apartments had just been completed and the Cumbie family was one of its first residents. Sometime later, the family moved to West Watson Street to be near the Covington Memorial Hospital which was located on the southeast corner of West Watson and South Cotton Streets. Dr. Cumbie set up his practice in an office on Court Square, on the 2nd floor above M. H. O’Neal Drugstore [on the corner across from the old First National Bank Building]. A son, William Gary Cumbie Jr., was born in August 1949. He was followed by sons James Ellis Cumbie, born February 1952, and John Franklin Cumbie, born August 1955. Another daughter, Martha Claire Cumbie, was born April 1958.

When the new Winn-Dixie shopping center was completed on the corner of East Three Notch Street and Oak Street, Dr. Cumbie moved to a new office just behind the Village Prescription Center. That would be his office until he retired in 1981. No one knows how many patients Dr. Cumbie treated nor how many babies he delivered during his 33 years of practice in Andalusia. He normally worked 5 days a week and half a day on Saturday, but he worked most days, long past eight or nine o’clock at night. He left a lasting legacy of care and concern for his patients.

Dr. William Gary “Bill” Cumbie, Jr. followed his father into medicine, graduating from the UAB School of Medicine in 1974. He received further training in internal medicine and oncology before beginning his practice in Montgomery, Alabama, in 1978. He was asked to reflect on the legacy of his father:

“The first inkling of medicine as a career entered my mind during the summer of 1966, between my junior and senior years in high school. I was working as an orderly shortly after the opening of the new Andalusia Hospital.

“My father was one of the town doctors. He worked long hours, often leaving for work long before we left for school and returning home late in the evening. After his office closed for the day, he would frequently go to the hospital to check on patients and sometimes make house calls to see patients unable to travel to his office.

“His favorite leisure activity was fishing with his preferred piece of fishing equipment, a cane pole, enjoying the moment whether the fish were biting or not. In some ways, this is a mirror of his life. In good times and difficult times, whether energetic or tired, his attitude was always positive. He loved practicing medicine.

“I knew these things growing up, but during that summer of 1966, I began to see firsthand how he interacted with his patients. Occasionally, when he came to the hospital for his evening rounds, if I was not busy with my orderly duties, he would take me with him to check on his hospitalized patients. I vividly remember how some patients, after lying quietly in their beds all day, would perk up and smile, finding reassurance when he walked into their hospital rooms. The effect of his presence was magical to me! It was then I knew I wanted to be just like him.”

The author thanks Dr. William G. Cumbie, Jr. for his help in telling his father’s story. Dr. William G. Cumbie, Sr. was the author’s doctor growing up in Andalusia. One particular visit to his office still stands out in my mind. My left hand was badly injured during a Friday night football game [by an opposing player standing on it with aluminum cleats]. I still remember going to Dr. Cumbie’s office Saturday morning for an x ray [it wasn’t broken but it was twice normal size]. 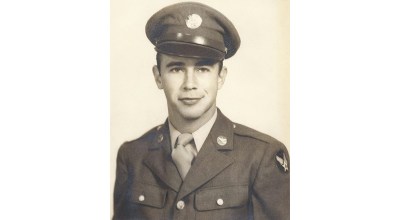 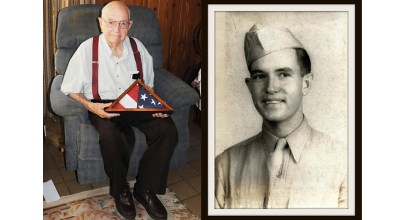